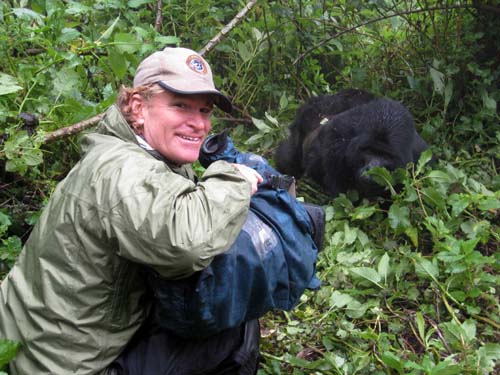 The “Gorilla Murders” episode of Explorer on National Geographic Channel covers the complicated issues of politics, refugees, and the economy of charcoal production in central Africa that culminated in the death of a family of gorillas in a wildlife preserve. The investigative journalism was underscored with incredible wildlife footage supplied by cinematographer Bob Poole, who was able to capture the intense features of these animals with a Fujinon HA25X16.5BERD super telephoto HD field lens on a Sony HDW-F900 HD camcorder.

To convey the emotional tale, the producers wanted the gorillas looking as human as possible. “He wanted super tight shots of eyes, fingers, fingernails, and expressions,” said Poole. “You can only get so close to the gorillas and then you have to rely on the long lens to get those details. The key is the lens is long. These Fujinon lenses are fast, very sharp, long lenses.”

Physically, it was a challenging shoot for Poole, who had to walk through forests and mountainous terrain. “Fortunately, the lens is not huge, and it’s very long and very fast,” he said. “At 6.5 pounds, the Fujinon 25X16.5 is about half the weight of Fujinon’s 42x but it still has the length and the speed, which is important in the dark forest. That’s what I like about it.”

The HA25X16.5BERD has a focal range of 16.5 to 413mm, with a maximum reach of 826mm when the internal 2x extender is employed. The other lens Poole used on the shoot was a Fujinon HA13X4.5BERD 13x wide angle HD lens with 2x extender. “At times I was really close,” he said. “I knew if I got low to the ground and used the handheld camera with the wide angle lens, that would make the gorillas seem really big when they approached.”

Poole also made use of the TS-P58A optical stabilizer on both cameras he used. “Not only is it a stabilizer, but it adds 1.25x magnification so it becomes longer,” he said. “Most stabilizers are built into the lens. This one was better for me since I could take it off if I wanted to lighten the weight.”

About Fujinon
Fujinon is a major manufacturer and distributor of optics and lens assemblies for the broadcast, digital cinema, and industrial markets. The company’s line of television zoom lenses are used in virtually every segment of the broadcast industry, including electronic newsgathering, studio and field production, and high definition television. For more information about Fujinon broadcast and communications products, call 973-633-5600 or visit our web site at www.fujinon.com.