Does the EX1 render the HVX200 obsolete? Don’t be too sure! 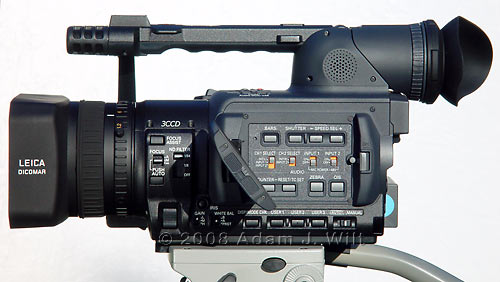 The PMW-EX1 is Sony’s answer to Panasonic’s HVX200: a variable-frame-rate, progressive-scan, multiformat HD camcorder using solid-state storage. The EX1 has higher resolution; it lets you shoot VFR in 1080p as well as in 720p; it betters the HVX slightly in both zoom range and latitude; it offers more image tweakability. Why would anyone bother with an HVX now that the EX1 is available?

There are plenty of reasons: the HVX200 does a lot of things the EX1 can’t. Back away from the bulleted feature lists and the bigger picture becomes clear. Despite superficial similarities, these camera fill different niches and serve different markets.

The fundamental difference between the two products is profound. The HVX200 (http://www.dv.com/reviews/reviews_item.php?category=Archive&articleId=187202354) is a “crossover camera”, with one foot in the standard-definition taped-based world and the other in the solid-state HD future, and compatible with both. The EX1 is a pure HD camera, with only token accommodations to standard-definition realities, and little real-world applicability to SD workflows.

The HVX200 shoots 4×3 or 16×9 DV to standard miniDV tapes, whether in interlaced or progressive. You have hour-long recording capability, and you have a cassette you can hand to a client at the end of the day, or put on the shelf for archiving. Your DV footage is immediately compatible with the massive DV ecosystem for production and postproduction. In the nearly two years I’ve had my HVX200, the clear majority of my shooting has been tape-based DV25, because that’s what’s been needed by my clients, programs, and workflows.

The HVX also shoots 4:2:2 DVCPRO50 to P2 cards. This often-overlooked fact means that the HVX is the only low-cost standard-def camcorder with a recording format suitable for high-end chroma keying and effects work (yes, Digital Betacam is better, and uncompressed is better still, but you won’t find either one in a five-pound, sub-$10,000 package).

Take it up a notch: 720p DVCPROHD. The HVX200 fits comfortably in this realm. Even though the HVX’s biggest liability is its reliance on 960×540 CCDs, which limit its ability to resolve fine detail, it neatly matches the resolving power of 720p DVCPROHD horizontally (960 samples) and falls just a bit short vertically. HVX200s work very well in 720p DVCPROHD origination, whether as B-cameras on Varicam or HDX900 shoots, or as main cameras in their own right. Of course, you have variable-frame-rate recording in 720p, with nearly the same flexibility as the EX1 provides (at least with Barry Green’s frame rate hack: http://panasonic.sixbullets.net/hvx200-framerate-hack.htm).

Only in 1080-line HD does the HVX really start showing the limits of 960×540 sampling—but even then, it hold up better than it should. I recently did an informal side-by-side greenscreen test with the HVX and the EX1. At first glance it was hard to tell the images from the two cameras apart, at least in the close-ups. Only when we pulled back to a longer shot did we wind up noticing the detail loss on the HVX’s pictures, mostly because individual hairs no longer resolved and the eyes became less defined.

While the HVX200 doesn’t have quite the dynamic range nor the tweakability of the EX1, it still has Panasonic’s gorgeous Cine Gammas with great highlight handling, and naturalistic color rendition that many shooters prize. I can tweak the EX1 to get colors similar to the HVX’s, but I have to tweak the Sony to get there: the Panasonic just looks that way to begin with. And even the Panasonic’s comparatively limited menus give you a broad spectrum of looks (http://www.dv.com/columns/columns_item.php?articleId=193001363).

You can monitor the HVX in HD or in SD. The HVX includes Y/C, allowing a single-cable monitoring solution with most of the sharpness of YUV component monitoring. Between the composite, Y/C, and component outputs, there aren’t many monitors you can’t hook the HVX to.

Jack of all trades, certainly. Master of none? Possibly—but the HVX200 is good enough at those trades to be the Swiss Army Knife of handheld cameras. SD or HD, tape or solid state, the HVX offers more flexibility than anything else at the price. Panasonic caught a lot of criticism for using SD chips (which were cheap and sensitive compared to their HD counterparts) and for stuffing a tape transport into the HVX, but the camera has turned out to be well suited for this transitional era where SD and HD commingle and people don’t want to give up tape.

Now consider the EX1: 720p and 1080-line HD with the most detail, greatest latitude, and highest degree of customizability in its class. What’s not to like?

The EX1 has no standard-definition capability at all. You can shoot 50Hz or 60Hz formats, but they’re all HD formats. You can downconvert during playback, but the downconversion quality is poor. There’s no DV output over i.LINK, either, only HDV output for footage shot in 1080i SP mode. If all your work is in HD, that’s not an issue, but most people I know still do a lot of production in SD.

There’s no tape. With the EX1, you shoot on SxS cards. At the end of the day, are you going to surrender your SxS cards to the client? Archiving is an issue, too; SxS cards are too pricey to stick on the shelf, so you have to copy them off to some other archiving medium. (True, the HVX’s HD is only recorded on P2 cards, but the HVX will at least do an in-camera dub of downconverted HD material to a DV25 tape.)

If you’re using the EX1, you had better have an HD field monitor along. The lack of low-pass filtering in the EX1’s downconversion causes distressing amounts of aliasing in its SD outputs, and the cross-color artifacts in its composite output render it almost unusable (certainly you’d never let a client see it). Even the benefits of Y/C monitoring are unavailable for the EX1 since it lacks that low-cost, high-quality connection.

No doubt about it, the EX1 is a fine HD camcorder. But without SD recording, without even decent SD monitoring, and with SxS its only onboard recording mechanism, it may be a little too forward-looking for the vagaries of real-world production, where clients still want to walk away with tapes and plug them into their familiar, comfortable, standard-definition postproduction pipelines.

If your work is purely HD and you’re happy with SxS as your recording medium, then the EX1 is a winner. It excels as a pure HD camera. But if you still live in the messy world of HD one day, SD the next, especially on day gigs where you hand the tape to the client, the HVX200 may remain the better bet.

The trick is always to analyze your requirements and to find the camera or cameras that best meet them. Sometimes, it’s the latest-and-greatest, but don’t dismiss older designs just because something newer is better in some—not necessarily all—aspects.