I see X-Rite Colorcheckers in every expendable supply store, which is strange as they really have nothing to do with HD.

Most camera rental houses have an in-house expendables store, and during a recent visit to one such store I ran across a stack of X-Rite “Macbeth” ColorChecker charts sitting on a shelf. I’m firmly convinced that the only reason people buy these is because they think there is a reason to use them for film-style production… but if there is a reason I can’t think of what it is. Let me explain:

I work as a consultant, both paid and unpaid, to DSC Labs, manufacturers of the highest quality video test charts in the world. I straddle both the film and video worlds, and a while back I realized that there was no simple, universal, dedicated color chart for film-style HD production. So… I asked them to make one for me. I took a bunch of their ideas, added one or two of my own, and came up with a new color chart that’s meant specifically for film-style digital production.

In the days of film it was often enough to shoot an 18% gray card as a reference. Adjusting the printer lights to make the gray card appear neutral and the proper density on the print stock effectively “white balanced” the image, as film’s color science is chemically baked into the emulsion. Shooting a gray card reference was a fairly reliable way to get great looking dailies from the lab, as long as what you sent them was properly exposed and nicely lit in the first place.

HD is very different. I recently conducted a seminar for DSC Labs, in conjunction with Panasonic and Sekonic, for IATSE Local 600 members in New York City, and one of the first things I did was zoom a camera into the gray scale portion of a DSC Labs Chroma Du Monde chart and plug extreme numbers into the user matrix (the one that says “R-G”, “R-B”, etc.). After setting every user matrix setting to +99 or -99 I pointed out that the gray scale was still perfectly neutral… and then I zoomed out to reveal that the colors on the chart were now skewed in ways that would be punishable by death if they appeared in anything other than the most extreme music video. “You can’t trust gray scales alone in video,” I told them. “You MUST see color to know what the camera is doing.”

At present I know of only three companies that make charts that can be used, in one fashion or another, to control dailies in HD. One has a matching set of software that you can use to pull stills from footage, do a rough grade and send the results to a colorist. That’s great if you have the time, budget, knowledge and inclination to do such a thing, but if you don’t then their chart isn’t going to do you a ton of good. The other is X-Rite, who doesn’t make a simple chart for HD use, but their ColorChecker charts get used anyway by those who care about controlling the look of their dailies and don’t know what else to use.

The problem is that while X-Rite “Macbeth” ColorChecker charts can be of some help to a colorist, they just aren’t designed for video use. The only color patches that have any real meaning are the gray scale values that run along the bottom of the chart. X-Rite provides a legend that tells us an incredible amount of information about the color patches, including sRGB values, L*A*B* color space values, and Munsell Notation hue and chroma values, but none of that is relevant to a colorist using a waveform monitor and vectorscope.

Unless you’re willing to do complex color space math the ColorChecker isn’t going to be much help in grading dailies.

The ColorChecker seems to be used most often for creating software-automated profiles of still camera images. X-Rite sells software plugins that do this for several software packages, and several Adobe products–including Speedgrade–have the built-in ability to do an “auto grade” using the chart. I don’t know many cinematographers who like the idea of an automatic dailies grade, but I know quite a few cinematographers who want to communicate their intentions to a colorist who grades their dailies for them. In some cases, often on lower budget projects, the cinematographer may wind up grading dailies themselves–in which case they’ll find the ColorChecker chart nearly useless.

The DSC Labs OneShot chart is designed to give a colorist everything they need to create a neutral dailies grade in one quick shot. (To read more about how the OneShot works look here and here.) To illustrate what the OneShot does and the ColorChecker doesn’t I decided to shoot images of both the OneShot and the X-Rite ColorChecker and see how they compared on a waveform monitor and vectorscope. I shot stills of each with my Nikon D7000, brought them into Lightroom 4 where I made sure each was rendered using the “camera neutral” color matrix, exported JPEGs that I put on a timeline in Final Cut Pro 7, and then exported the sequence of images to Apple Color for grading.

In order to make my point more clearly I shot both charts on the floor of my living room lit only by blue skylight through a nearby window. By intentionally skewing their color towards blue I felt I could best show the advantages of the OneShot chart over the ColorChecker.

The DSC Labs OneShot (Pocket-sized) and the X-Rite ColorChecker.

The ColorChecker has a lot more colors on it than the OneShot does, but most of them aren’t known references to a colorist. Every aspect of the OneShot has a specific meaning in the digital realm. For example:

This is what the OneShot looks like in Apple Color. I’ve zoomed in on the chart to exclude the rug and eliminate color elements that might be distracting on the scopes. The image is obviously blue overall, and that’s easily seen not just by eye but by looking at the vectorscope:

Likewise, a look at the waveform monitor image tells us immediately what’s going on:

The far right of each channel shows the column of the chart containing white, middle “18%” gray (40 IRE) and black. White, black and gray should line up at the same levels in each color channel for the image to be neutral. The fact that the white chip’s signal in the blue channel is really high while the same chip in the red channel is really low tells me that the image is skewing blue overall. (Note: I shot these pictures using a not-very-expensive still lens. The waveforms slope downward at the left and right edges of frame due to lens vignetting.)

After pushing the highlights, midtones and shadows away from blue and toward orange/red in Apple Color I ended up with these results:

The colors all fall along, or near, their vectors. Not all colors are perfect in hue yet–red, yellow and green could use a little finessing–but it took me very little time to get this far in the process. Every color on that chart either falls into a box or–in the case of flesh tone–along the +I line between red and yellow. Further tweaking that puts the colors on their vectors will result in a neutral and color-accurate image for dailies.

White, black and gray are in alignment, which means there’s no overal color cast to the image. This was really easy to do.

Now, let’s look at the ColorChecker under the same light. Here’s what the vectorscope looks like:

I have no idea where any of those colors should be. A quick look at the waveform monitor is similarly confusing:

I can figure out where the white reference patch is (top left) but I have no idea where any of the other gray scale patches have landed as they are obscured by color patches. The OneShot chart puts white, black and gray in a single column so they are easily identifiable.

To neutralize this image I had to zoom in on the white, gray and black patches, one at a time, and grade them to be as neutral as possible. As their color corrections interact with each other I had to go back and check the other patches after manipulating one to see how the others changed. For example, after making the white chip pure white I’d have to move over to the gray patch and make that perfectly neutral gray before moving on to black and doing the same… and then I’d go back and check them all again. I had to do this THREE TIMES.

The geometry room in Apple Color, where I was able to isolate individual patches so I could see what I was doing on the scopes.

Here I’ve zoomed in on the gray patch so I can see exactly what I’m doing on the scopes.

The OneShot is designed so that white, gray and black values are easy to see without having to isolate each tone, which means the colorist can manipulate the shadows, highlights and midtones simultaneously and compensate for interactive color shifts on the fly.

Here’s what the ColorChecker vectorscope looked like after white balancing:

Red seems to be on its proper vector, and one of the blue patches is on its proper vector but knowing that isn’t terribly helpful as there’s more than one blue patch on the chart. The flesh tone patches don’t fall along the I-line as neatly as they do on the OneShot chart, and there are an awful lot of patches that fall around the I-line that probably aren’t flesh tone patches. The green patch is on its vector, but there are clusters of color dots around red, yellow and magenta that just don’t have anywhere specific to go.

I can’t make much sense of that. Can you?

The X-Rite ColorChecker is a powerful tool but it’s not a dedicated video tool. It’s meant to be analyzed by software that then makes color decisions for you. As best I can tell it was originally meant for the print industry, and it’s been so successful that it has since become a reference for still photography as well, but it just isn’t meant to communicate anything meaningful to a dailies colorist. The DSC Labs OneShot is.

Disclaimer: I have worked as a paid consultant to DSC Labs and helped design the OneShot chart.

Thanks: to Adam Wilt, for letting me borrow his ColorChecker Classic chart. 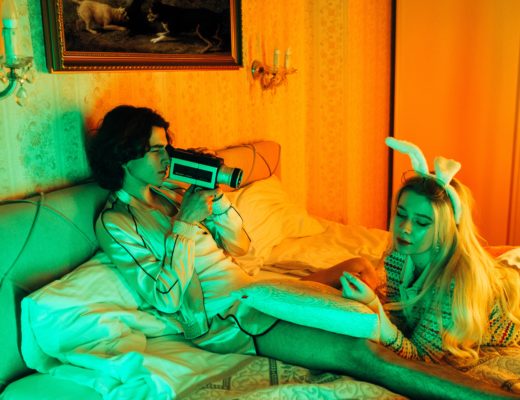 It’s a concomitant of the modern age that some people think a Bolex H16 is heavy. In fact, it...