That hard place was another rock! 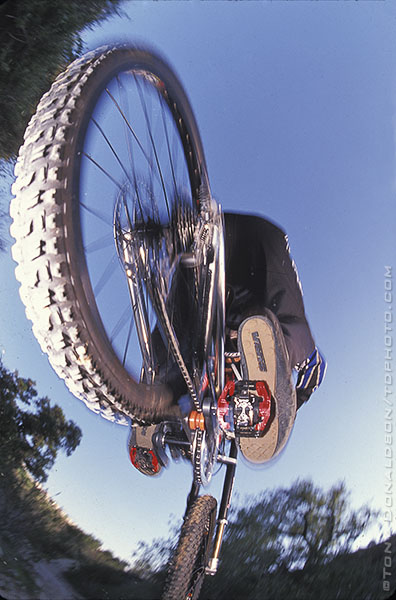 Getting the shot you want isn’t always easy. I’m working on a few war stories to illustrate that, including this one. I wanted to create an unusual image for a client highlighting their product. I had one of their sponsored, professional riders at my disposal. But not just any rider, this guy is the world champion downhill mountain bike racer.

I was working with hero, friend, and former champion professional BMX racer “Pistol” Pete Loncarevich. Pistol is an intense guy, which is how he got to the top of BMX racing, then transferred that to becoming the number one downhill MTB racer. Skills and personality for days.

The image was for an ad and the cover of a catalog featuring the shoes. As we walked up one hill, Pete saw a little hit, not even a jump, that would work perfectly for what I had in mind. I had him hit it once to make sure where he’d be in the air, then I set up my shot. I laid down right under his trajectory, much less height than distance.

I wedged my head between two rocks and had a flash on my camera, one off to the far left in my hand, and one to the far right into a softbox held by my assistant. She was at a safe distance. Pete’s tires were less than six inches from my lens, the light was fading and I had him do this almost 2 dozen times. This was a few years back, before I’d switched to digital and I had to make sure I had the shot. No Polaroids, just prefocused and took a meter reading where his feet were going to be. The first pass is always the scariest.

After the first shot, though, I was focused on making adjustments to my timing and composition. I could have just set the camera on a bean bag and hoped, but I like to look through the lens, even when shooting with a fisheye. Sometimes ESPECIALLY when shooting with a fisheye. I wouldn’t have had the confidence to do this with just anyone on a bike, the secret is having a professional who can consistently hit the same line, same height every time unless asked to do something different. The safety, precision and style of a professional rider makes as much difference as the person behind the lens. Especially when my life was essentially on the line. If he slipped, my head would have been PART of those two rocks.

The result was exactly what I was looking for, and I’m grateful to have had Pistol’s help in making it! 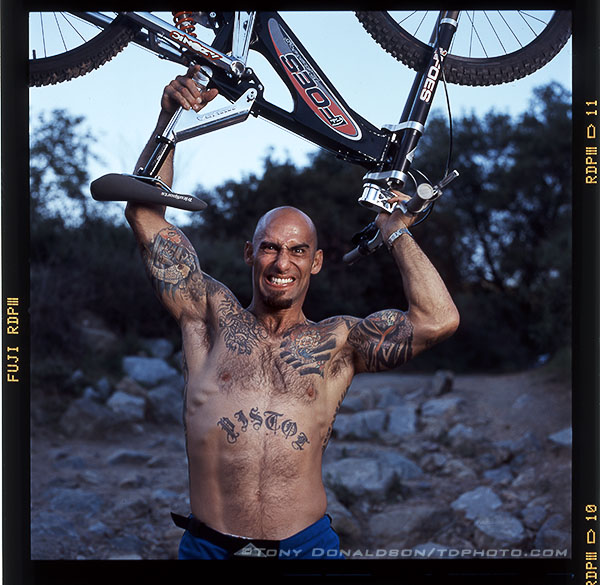 Would you want to race against this guy?

Scary as he might look, he’s also one of the nicest and most professional people.