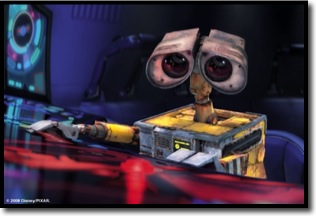 Just saw WALL-E with my son, and in typical Pixar fashion, it is awesome!

Two quick things I found hilarious for the Mac-Geeks out there.

First, there is a character in the film called Auto, who is an auto-pilot robot for the ship. The character’s voice is done by Macintalk, the speech synthesizer included with the Mac back in 1984. It sounded familiar, and I confirmed it as the “actor credit” actually appears at the end of the film.

Second, there is a scene where WALL-E reboots… and yes, it is the Macintosh startup chime that you hear. I found myself laughing out loud (and I think I was the only one within 20 rows of me who got the joke (geek!).