Volumetric lighting, Crepuscular rays, God rays, and the like are visible rays or even globes of light. You can’t see lights themselves with the built-in lighting in After Effects (for background see Cameras, lights, and points of interest), so plug-ins are used to help make light visible. 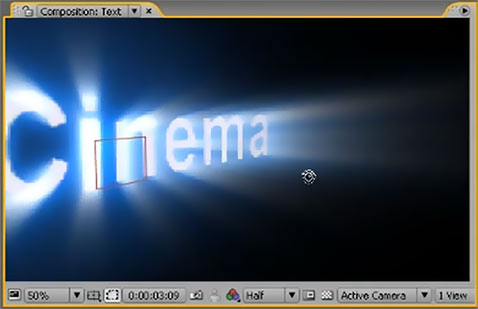 Volumetric lighting, Crepuscular rays, God rays, and the like are visible rays or even globes of light. You can’t see lights themselves with the built-in lighting in After Effects (for background see Cameras, lights, and points of interest), so plug-ins are used to help make light visible.

The most basic effect is text with shafts of light, as seen below in video by Dennis Radeke. It gets more complicated quickly, especially in numerous Underwater Scenes in After Effects found in the roundup by Rich Young.

When you use a 3D camera in AE, you’ll notice quickly that the simple volumetric look is a 2D effect; the source point is locked in 2 dimensions. You can get beyond the 2D look by using the toComp expression, perhaps seen earliest in explanations by Dan Ebberts or in Peter Torpey’s script noted at bottom. For more info, see Layer Space Transforms methods to achieve convincing 2.5D effects in AE Help. Chris Meyer has some background on these transforms in Deeper Modes of Expression, Part 4: Space Conversion, and Harry Frank shows some applications in his video Using the toComp Expression [later, Harry noted that “…toComp actually returns a 3 dimension array, the third value stuck at 1777 px, for whatever reason”].

Later, in 2014, Andrew Kramer showed variations on the toComp expression theme, and some additional perspectives, in his update of the technique in 3D Light Rays in AE!.

In 2007, Motion Artwork shared a YouTube tutorial on how to make a 2.5D volumetric light with CC Light Burst, 3D Text in After Effects ENGLISH // Part 2 (embedded below).

Volumetric lighting effects, such as light rays and glows, often look too synthetic and are prone to banding. On Lynda.com, Chris and Trish Meyer present After Effects Natural Light Effects, showing how to use fog, dust, smoke, particles, etc. for more realism and to help with compression. If you don’t have a Lynda.com subscription, click here for a free 10-day trial.

As noted earlier, you can’t see lights themselves in After Effects, as you might see solid lights in 3D programs. In addition to the toComp method, there are 3rd-party plug-ins. Trapcode Lux lets you add spotlights, point lights, or stage lighting to simulate visible light in a dark or foggy environment. Hopefully, someday Lux or its features will ship with AE, with a feature set similar to Flame 2012 Relighting Tools, as part of a more integrated 3D environment. We can dream.

A newcomer to this space is BorisFx, with the addition of BCC Stage Light, which was discussed by Kevin McAuliffe:

If you find yourself out of Lux, fancy lens flare filters like Video Copilot Optical Flares, Knoll Light Factory, sets from Genarts and BorisFX and so on, have controls built-in that help fake point lights, alone or in conjunction with other effects. It doesn’t stop there either, since there are a few more tutorials sharing challenging techniques to partially mimic the main features of Lux.

Satya Meka has a quick tip After Effects tutorial at AE Tuts, Add Lux To Your Lights (Without Lux):

Here is another QuickTip for those of you who still haven’t procured the amazing Trapcode Suite. Though we advise you get the plug-in yourself, here is a handy little tip to to help generate the look of Trapcode Lux.

In addition, awhile back Peter Torpey posted After Effects: Volume Light, a tutorial and the finished script on how to create volumetric spot lights using expressions (it even responds to camera movement). You may want to look at Harry Frank’s Using the toComp Expression to pre-visualize the use of the Beam plug-in. The script was created in 2006 using After Effects 6.5 only, so there could be hiccups along the way.