We bring you up to date on all the latest Thunderbolt news, products and developments. This guide also includes our recommended

Thunderbolt was the new, high-speed, dual-protocol I/O technology designed by Intel and introduced by Apple a couple of years ago that was supposed to set the world on fire. So far it hasn't. Thunderbolt adoption has been slower then anticipated and while we finally have a wide range of Thunderbolt devices available, they still carry a big premium.

Thunderbolt delivers amazing performance, with ease & simplicity. It makes attaching Thunderbolt enabled storage and I/O cards a breeze. All of the current Apple iMacs, MacBook Pros, MacBook Airs and Mac Minis have Thunderbolt. Thanks to Thunderbolt and USB3, today’s iMacs no longer have the drawback of limited upgradeability. They are easily expandable and support video capture and output as well as professional RAID storage solutions. For many editors, they have all the power and performance you need! 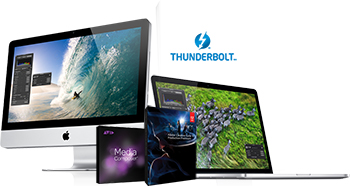 The new iMac comes with two Thunderbolt super-high speed ports, 2 USB3 ports and best of all they now include NVIDIA graphics. This means the Mercury Playback Engine in Adobe Premiere Pro will no longer be limited by your GPU. Avid Media Composer and Symphony will run better as well. With each new update to FCPX, it is becoming clear that Apple is also optimizing it to take more and more advantage of NVIDIA graphics processing.

We also recommend the 15″ Mac Book Pro with Retina display for video editing. Make sure you get it with 16GB of RAM, today's NLEs really need it. 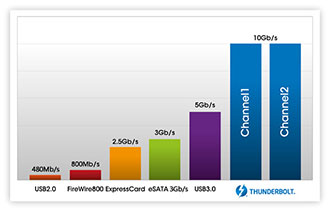 Thunderbolt vs USB3 vs FireWire vs HDMI

While we expect big things from Thunderbolt this coming year, we do not expect it to replace USB3. According to Intel, they expect to see both Thunderbolt and USB3 side-by-side in all new computers down the road. This makes both technical and economic sense.

USB3 is far less expensive to implement and it has backwards compatibility with all the existing USB devices. The Thunderbolt interface requires additional hardware and chips to achieve its high data rate, which is great for devices that demand that data rate, but overkill for so many low cost peripherals like mice, keyboards, webcams, card readers, etc.

It is clear that the days of FireWire are numbered. As I mentioned earlier, fewer and fewer computers come with a Firewire port, and with the move to tapeless acquisition, today's new camcorders and DSLRs use USB and HDMI as their connections.

We do not see Thunderbolt replacing or even impacting HDMI in the short term. HDMI has become the standard for connecting HD televisions and home theater gear. Thunderbolt is not intended for the living room….. however …. if and when Apple decides to ship an IOS equipped Apple iTV television it would most likely have a Thunderbolt port on it. So depending on how fast this new Apple iTV gains marketshare, you could see Thunderbolt become integrated into other consumer electronics devices, but that is several years away.

The latest 27″ iMac does a fantastic job of running the latest Apple, Adobe and Avid software. You'll get outstanding performance and be able to easily handle AVCHD and DSLR footage with some pretty multiple layers of video and fairly complex timelines. We even have customers editing RED footage on their iMacs and MBP w Retina – WOW!