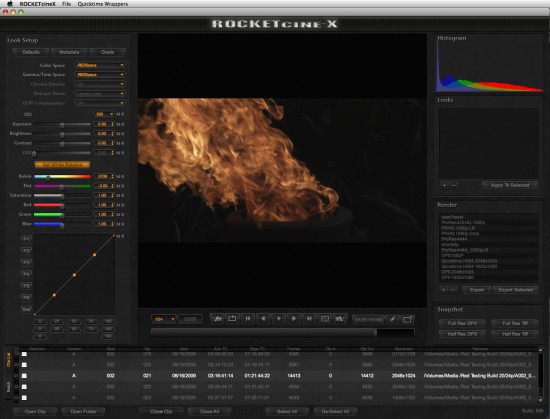 Red recently released the Red Rocket board, a PCIe card to accelerate the tediously slow conversion of R3D files to something more immediately useful, like QuickTime files, DPX and TIFF sequences.

As usual, Red has shipped hardware as soon as the hardware was ready, and the software is playing catchup, so at this time, there is only an alpha stage piece of software called Rocketcine-X that can actually utilize the Red Rocket to accelerate R3D conversions. Red says that it will require only relatively minor changes to applications that already support Red’s R3D API in their code, so hopefully vendors will quickly be able to implement support of the Red Rocket card. We’re looking at you, Apple, Avid, Adobe. Ahem!

So what is Rocketcine-X? It is a blend of Redcine (if you’ve used that) and RedRushes (if you’ve used that) that allows you to load a series of R3D shots, grade them individually, tweak the color parameters on a shot by shot basis, and output to QuickTime files or DPX or TIFF sequences, and export batches while you keep working. That is the good news. The bad news is that this is in development, alpha level software with a lot of bugs and features omitted, such as:
-you can’t save a Rocketcine-X project
-you can’t scale with letterboxing – crucial for 2:1 footage to fit properly into a 16:9 movie or image sequence.
-you can’t add windowburned timecode readouts at all.

Oh, and as usual for Red, there is zero documentation at this early stage in the game. (EDIT: To be fair, their approach is of the “If someone can find this useful, lets get it to them ASAP and we’ll follow up with docs/updates ASAP.”)

Fortunately, it is somewhat straightforward, but here’s a video tour of the features and some of the limitations I made. It is long, about 22 minutes, but is only 32MB, and if you watch it, you’ll know the ins and outs of the program pretty well. Video and bug list after the jump.

And here’s the list of bugs/limitations I’ve come across so far:

File Menu – no open or save – can’t save sessions!

DRX – greyed out, not usable

Resolution control – defaults to 1/2+, I’d prefer that it either default to Full or just remember what was used last

Single/Multiclip Mode – doesn’t seem to do anything!

Histogram – doesn’t respond during playback, only on stills (but turns grey to indicate, fair enough. Be nice if it were live though!)

Looks have many issues:
1.) You can save them, but you can’t apply them
2.) They don’t save from one session to the next – if you quit, they are gone forever
EDIT – I’m wrong – apparently you can use/save – there’s an issue with how I installed – someone is saying I can install an earlier build and update to the current one and these will work – will test ASAP

Render:
-very nice that can save presets, but having the target folder in the preset is very cumbersome, because
-can’t edit a preset after made, only delete it
-great that the QT dialog is supported for more control, but the scaling controls don’t work – when I output to 1080 with Maintain Aspect Ratio Using Letterbox or Crop….it doesn’t work – just kicks out 1920×1080 and stretchs the results

-output of some sizes, like 2K anamorphic, when requesting 1920×1080 QuickTimes, you get a square. More on this later

-in the Batch list, need Cancel All and Remove All options. Removing from the list is verrrrrry slow – deal killer

need window burn options! Redcine did this nicely. Can’t use for production of offline media for clients until it will do this.

BIGGEST ISSUES IN ORDER OF PRIORITY:
-need proper scaling to work when request 1920×1080 with letterbox, of 720×480 with letterbox
-need Open and Save of sessions
-need windowburn

until the above 3 are addressed, this is not production usable, because:

-without scaling, can’t take a 2:1 aspect ratio file and fit it into a 16:9 deliverable with correct scaling/aspect ratio – it gets stretched tall.
-without Save & Open, you can’t re-open a session later to see what you did, or re-output to different settings, or tweak it, etc. – imagine MS Word with no save….
-without windowburn, can’t deliver offline material the way clients universally want it – with timecode burned into the bottom in the black of the letterboxing.

Some more thoughts on support from various vendors:

I can see Apple as likely to support this, but it is just a question of when/how long. Once they do, Color will suddenly be a much more useful application if they can support the card properly. If the data has to go from a hard drive, over the system bus, to the Red Rocket for debayer, back across the bus to GPU for color correction execution, back to the CPU for processing, and back out an AJA or BMD card, however, performance could well be less than stellar. We’ll have to see. But native playback of R3Ds at full quality in FCP would be excellent, and sounds possible – if the Rocket can convert to DPX files faster than realtime (saw it converting at 32fps the other week), that is FAST. But native support would mean Apple’s Log & Transfer module might be accelerated. I hope they fix the crop/scale issues there as well, and offer a full size/quality debayer option too, which they currently do not.

Adobe – I see no reason why Adobe wouldn’t jump on this. VFX artists in After Effects especially would benefit from speedy decoding of the RAW bayered data with access to the full dynamic range.

Avid – Avid doesn’t support other people’s hardware for playback. Ever. (Maybe in the future, they HAVE to get support for AJA and/or BMD cards if they want to remain market viable IMHO, but I digress). But I could see MetaFuze, their file based conversion utility, taking advantage of it in the future.

NEXT UP: CONVERSION TIMES!