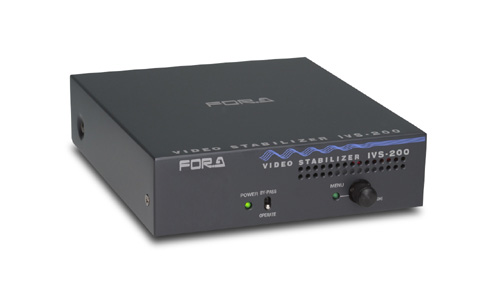 FOR-A, a leading manufacturer of video and audio systems for the broadcast and professional video industries, will introduce the IVS-200 Video Stabilizer and Automatic Video Optimizer at the 2010 NAB Show in Las Vegas, Nev., April 12-15 (Booth C5219). The new stabilizer is the latest member of FOR-A’s family of video stabilizers for image stabilization, and is ideal for improving unsteady video for security and surveillance applications.

The IVS-200 corrects any video source, from live feeds to VCR tapes and DVDs, stabilizing shaky video in real time during capture or video that has already been recorded. While other video stabilizers correct vertical and horizontal shaking, the IVS-200 also corrects rotation and diagonal shaking. In addition, the Auto Video Optimizer (AVO) component makes automatic corrections of video to appropriate levels.

Suited for a variety of applications, the IVS-200 is compact and features simple “plug-and-play” operation. Other functions include analog composite I/0, correction area masking function, and time and title display.

FOR-A is a major manufacturer and distributor of video and audio systems to the broadcast, postproduction and professional video markets. For more information about FOR-A’s product line, call 201-944-1120 or visit www.for-a.com.