Panasonic has published an online simulator the VariCam’s menu system, so you can get up to speed on the camera’s interface and setup options before a VariCam gig.

A frequent complaint with modern cameras is that they’re too complex: they have busy, multi-button control panels with multiple modes for all their disparate capabilities, so when you get one on a gig there’s a considerable learning curve to overcome before you can confidently capture a clip.

Manufacturers understand this and increasingly provide online simulators, so you can learn how the navigate a camera’s setting and get comfortable with its operations before the clock starts ticking on-set (and in your rental budget). Arri has sims for various Alexa and Amira models, Sony has their PMW-F5/F55 sim, and now Panasonic has sims for three VariCam versions: VariCam 35, VariCam 35 with Codex recorder, and VariCam HS (the high-speed, 2/3″ HD variant): 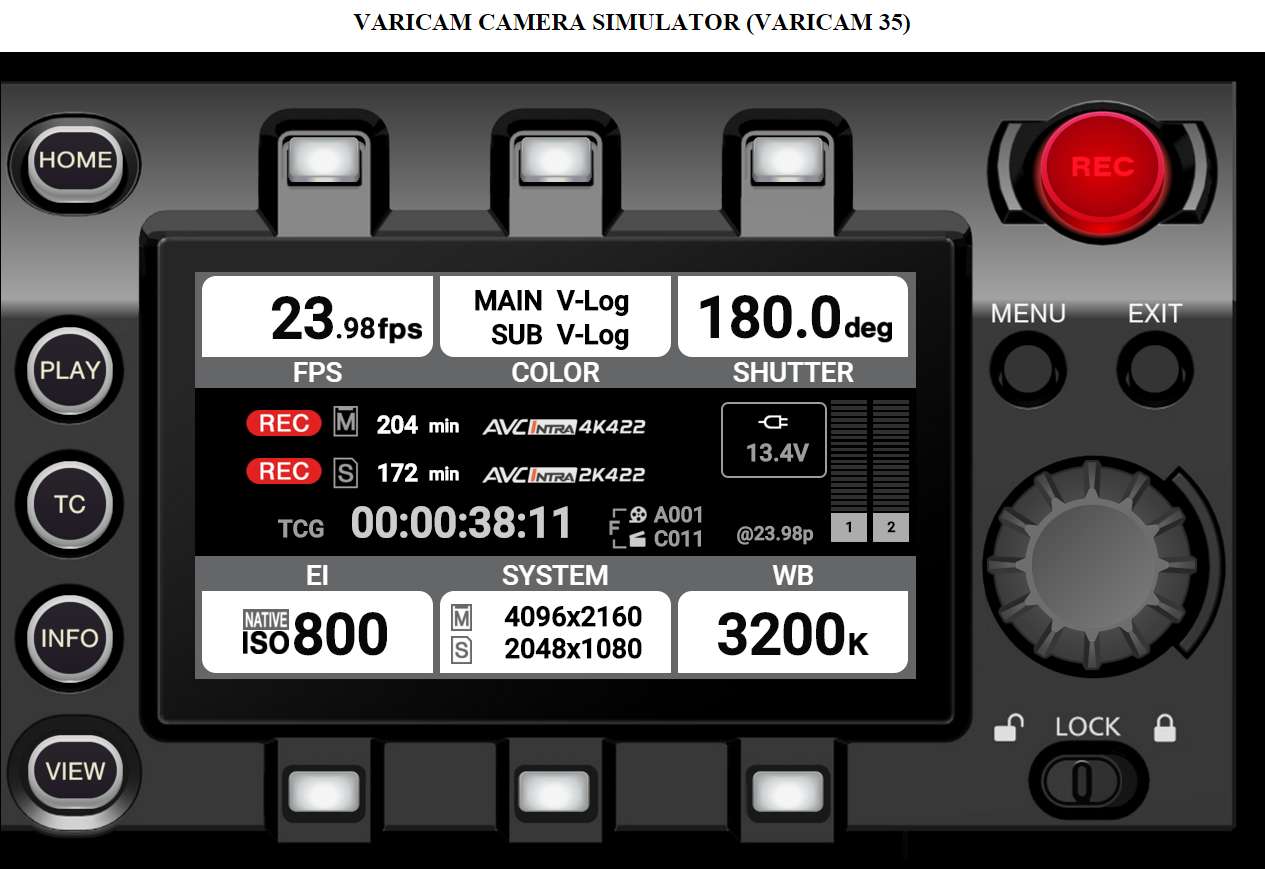 Regarding this sim, Panasonic says:

NEWARK, NJ (January 19, 2016) – Panasonic has announced the immediate availability of VariCam menu simulation programs that deliver a virtual, instructional tour of the operation of the VariCam 35 4K cinema camera/recorder, VariCam 35 with Codex V-RAW recorder or VariCam HS high-speed camera/recorder. The free programs can be downloaded at http://pro- av.panasonic.net/en/varicam/vcs/index.html.

The VariCam menu simulators very closely approximate the full range of operation of the cameras’ Remote Operation Panel, and represent an ideal approach for camera operators who want a head-start on familiarizing themselves with the equipment, for students who want to prepare in advance of hands-on camera time, and for many others who would benefit from this virtual VariCam interface.

For more information about the VariCam 35/HS, visit www.us.panasonic.com/varicam, or contact Panasonic at 877-803-8492.

When you fire it up on a Mac, it does indeed want a 1920×1080 window. It scales down fairly nicely with your browser’s shrinky-dink button (Command-minus in Safari), though some of the button get misplaced at the lowest magnification.

It’s not especially mobile-friendly: on the 4×3 aspect-ratio iPad, it’s usable in landscape mode—just barely—but not in portrait unless you drag it side-to-side. On a 16×9 iPhone it’s usable in landscape only if you manage to tap and drag on the white margin above the control panel and move the sim up enough to see the bottom row of buttons (rotate back to portrait to regain access to Safari’s menus and buttons), while portrait use involves lots of side-scrolling. So while you can use it on mobile, it’s really best explored on a laptop or desktop.

Formatting issues aside, it’s an extremely helpful tool. While the VariCam conforms to the general current practice—an LCD panel surrounded by softkeys, a jogwheel, and several dedicated mode and function buttons—its particular organization of modes and functions is different from Arri’s or Sony’s, and if you’re new to VariCam it can be hard to know where to start. The sim lets you “walk the neighborhood” and get familiar with it in the comfort of your own home, so when you’re on-set with the beast you won’t waste any time figuring out how to drive the darned thing and can focus instead on making pictures.

(And, apropos of absolutely nothing, I should note that while the VariCam 35 is often abbreviated “V35”, the VariCam HS is never known as the “VHS”!)