In a single candle lit studio I could barely see Panasonic’s New Varicam LT, but what I could see I liked immediately. 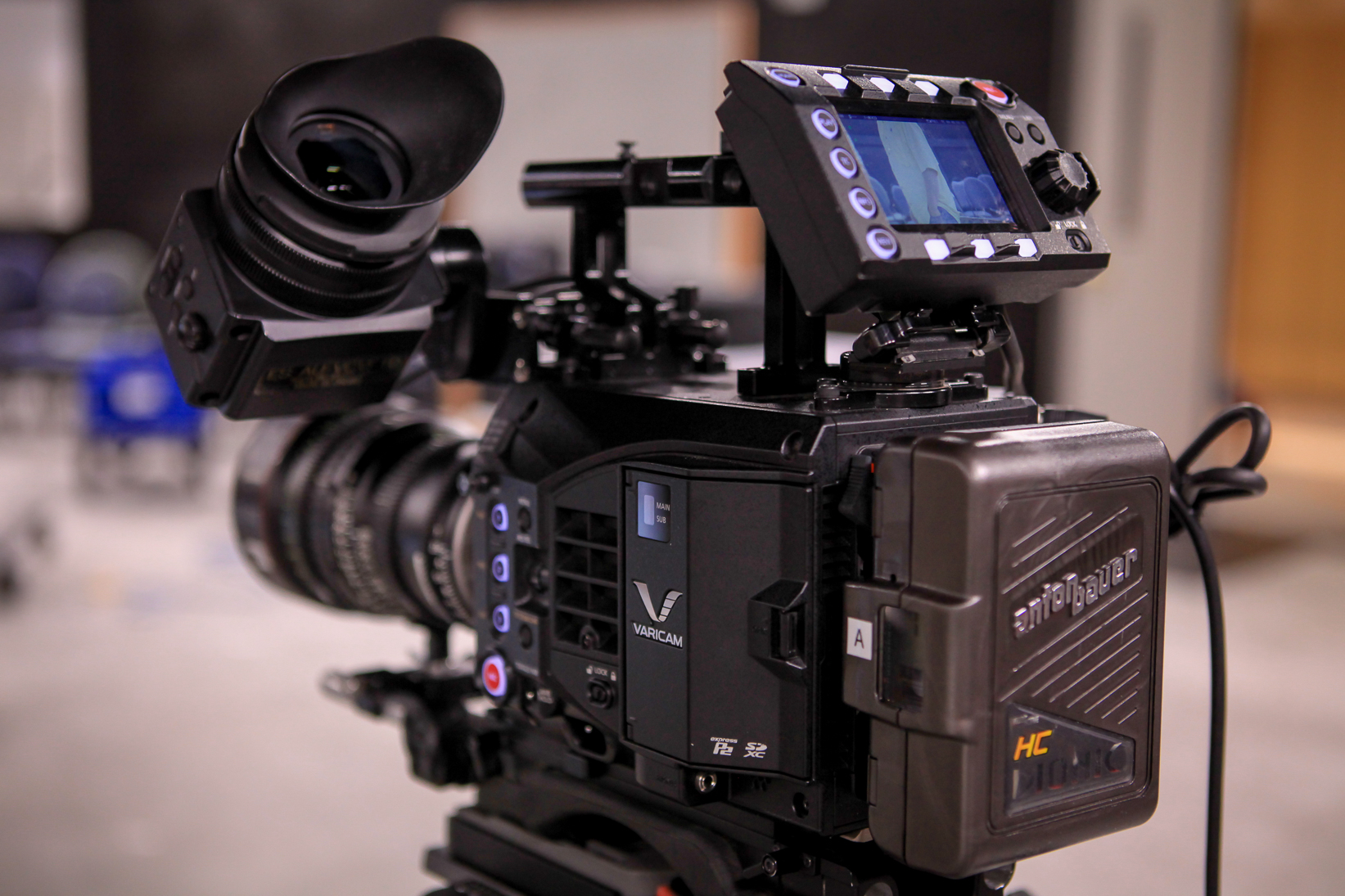 For a few hours in a studio mostly lit by a single candle my first experience with Panasonic’s new Varicam LT began in what felt like a shroud of secrecy. No this was not a secret meeting, it was a demo. Through the largesse of Brian Murie of Take One Film and Video I was invited to try the LT at Belmont University.  The low-light test caused the feeling of secrecy where a little over two dozen of us got a good-hard look at the dual native ISO camera. For some reason, we whispered as we discussed what each thought impressed us. Why did we whisper? Again – it was dark in the studio. 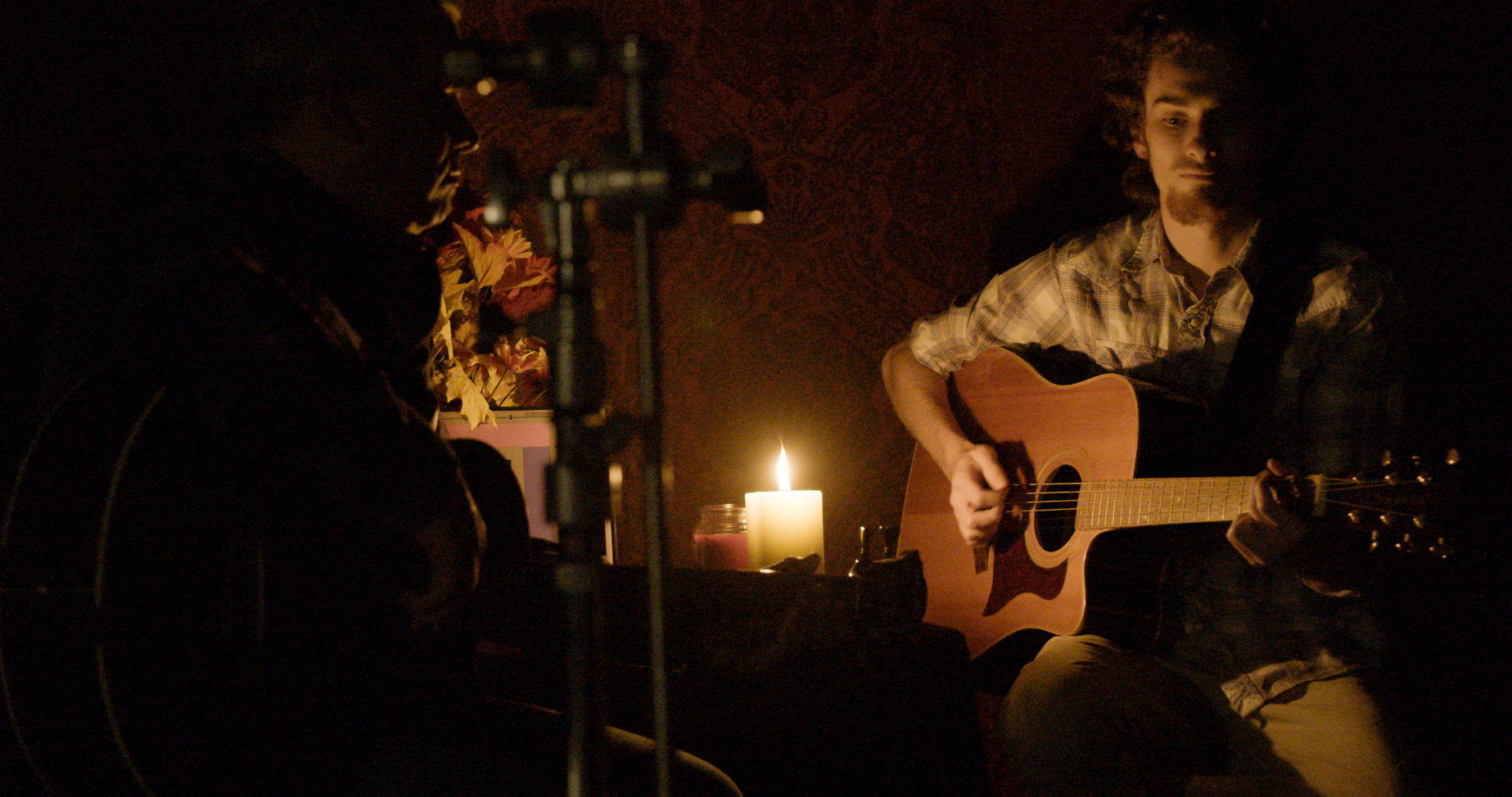 On display, and for good reason, was the Varicam LT’s dual native ISO of 800 and 5000. A single candle light was the light source, and it was enough for a proper exposure when the camera was set at 5000 ISO. Essentially 1 ft candle lit the scene of two guitarists playing their music. It was pretty amazing to watch in action. Of course, this is an obvious test and one that works well. There is a little noise at 5000 ISO, but it’s a complimentary structure and feels less digital noise than other cameras at lower ISOs. In the DaVinci Resolve with barely any noise reduction the 5000 ISO was clean. Add a touch of sharpening and the image looked very pleasing.  In our setting where we had two musicians playing music with candle-light the background was a ruddy red pattern and the color was similar to the actors’ shadow side of their face. Yet, the skin tones had a nice separation from the background.

In our demo – getting our greasy hands on this camera – one of the major discussion points was “Is it a true 14+ stops of dynamic range?” In a very unscientific setting it is hard to be exacting. In the color suite the information was in the footage. The candle flame wasn’t burned out white, instead it had the yellow glow a flame should have. The shadows had detail with only the deepest blacks losing some detail.

Only when using a DSLR for still photography and it’s focus points have I seen an equal focus assist system. Instead of the “in-focus or not” edge peaking, Panasonic has an OLED EVF with small squares which grow in size and clarity as a region comes into focus. For example, if you have a C-stand in frame and the camera lens has the C-stand in focus then in the EVF the C-stand will have clearly defined green boxes over it. Different from edge peaking, the Green Squares grow and shrink depending on how in focus the object is or isn’t. Trust me when I say this is hard to explain, but immediately understandable upon experiencing. With Panasonic’s EVF you can see what is coming into focus and when you have critical focus. Rolling past and through focus should be a thing of the past for Varicam LT shooters.

The EVF is a true extension of the camera. On the left side of the EVF a shooter will find four buttons and a scroll knob. When operating with an eye pressed against the EVF the operator can dive into some of the more often used camera settings and change them. A camera operator could change, on the fly, the ISO, FPS, and White Balance quickly and without missing a shot or taking their eye away from the camera.

The Varicam LT we demoed was set up for a Canon EF Mount. I wanted to see how fast the camera could be changed out to a PL Mount. In a matter of 20 to 30 minutes we had it switched out and ready to shoot. If I rented this camera out I don’t think I’d want the renter to be changing the mount, but as an owner/operator I think I might bounce from one mount to another depending on the project at hand. What’s interesting is changing mounts is relatively quick and after a few changes could be a simple process. Is it an out in the field process?  I think it will be best to change mounts in a controlled setting like a camera prep area. One thing to be careful with changing mounts is each mount has contact points (contact pins are on the camera if I remember correctly) and you don’t want to damage any of these. So care should be taken when changing mounts. I wouldn’t rush it.

One of the big features this camera has I really wanted to see in action was the 1.3x and 2.0x anamorphic de-squeeze. So during the demo I called Nathan Thompson of Contrast Visuals to see if we could try out their Hawk Anamorphic lenses. On a first look the Varicam LT has a 1.3x, 1.3xmag, 2.0x and 2.0mag. I am not knowledgable enough to know the difference yet between a straight 1.3x or 2.0x and the “mag” choices. I hope the “mag” means the metadata is saved to the clip and NLEs will read that meta data and de-squeeze the image upon import.

Interestingly, Adobe Premiere will see the de-squeezed anamorphic footage in its media browser but will not import the footage de-squeezed. It seems to me the Varicam LT has written metadata supporting the de-squeeze and NLEs are not yet reading it accurately. Since this camera hasn’t officially shipped in bulk this is completely understandable.

Let’s take a look at the frame grab below. My image editing is doing no justice here at all. First, Anamorphic in candle-light only is very nice. In this situation the camera ISO was set at 5000ISO. When we shot 60fps I turned the ISO up to 6400. There was a touch more noise at 6400 ISO, and it seemed to be acceptable. Yes, there are many cameras capable of shooting with Anamorphic lenses. All a camera really needs is a PL lens mount, but to be able to see the image de-squeezed in an EVF is a very nice bonus. There are aftermarket EVFs and monitors capable of de-squeezing an image and for cheaper than Panasonic’s EVF, but do they also operate some of the camera functions? I doubt it.

The Varicam LT shown in the demo had Panasonic’s shoulder mount and Grip. This worked as expected and made the camera comfortable to shoot. The cost of the shoulder pad is a little high, but I can see it as part of a camera package for those looking to purchase. The hand grip, I didn’t get a lot of time to dive into the details here. Going to have to come back to its usability.

The Weight of the camera is nice. I can see the camera fitting on a Movi M10 or DJI Ronin well. When shooting hand-held with a large anamorphic lens on the front I felt like the camera was easy to shoot. From my brief time, and I mean very brief, it appears Panasonic wants nothing to get in the way of a shooter. With an EVF capable of controlling key, a grip with buttons to record, and what appears to be an EF Iris wheel( I could be wrong here) Panasonic has made a camera easy for operators to capture cinematic moments. When running & gunning the control panel becomes a small monitor for directors or ACs. The mount for the control panel is a swivel capable of turning a little less than 180 degrees horizontally and vertically nearly 90 degrees. The control panel also comes off the camera for jib operation or other situation where an operator or AC can’t reach the camera easily.

If you’re in the South East Region give Take One Film and Video a shout. They can handle your Varicam LT needs, as well as other Panasonic needs, and they have a very capable team who can likely answer any question you may need answering. I got to give a big thanks to Brian Murie of Take One Film & Video for setting this demo up for those of us who attended. It’s nice to see a camera with other professionals who might ask a question one of us might have missed. 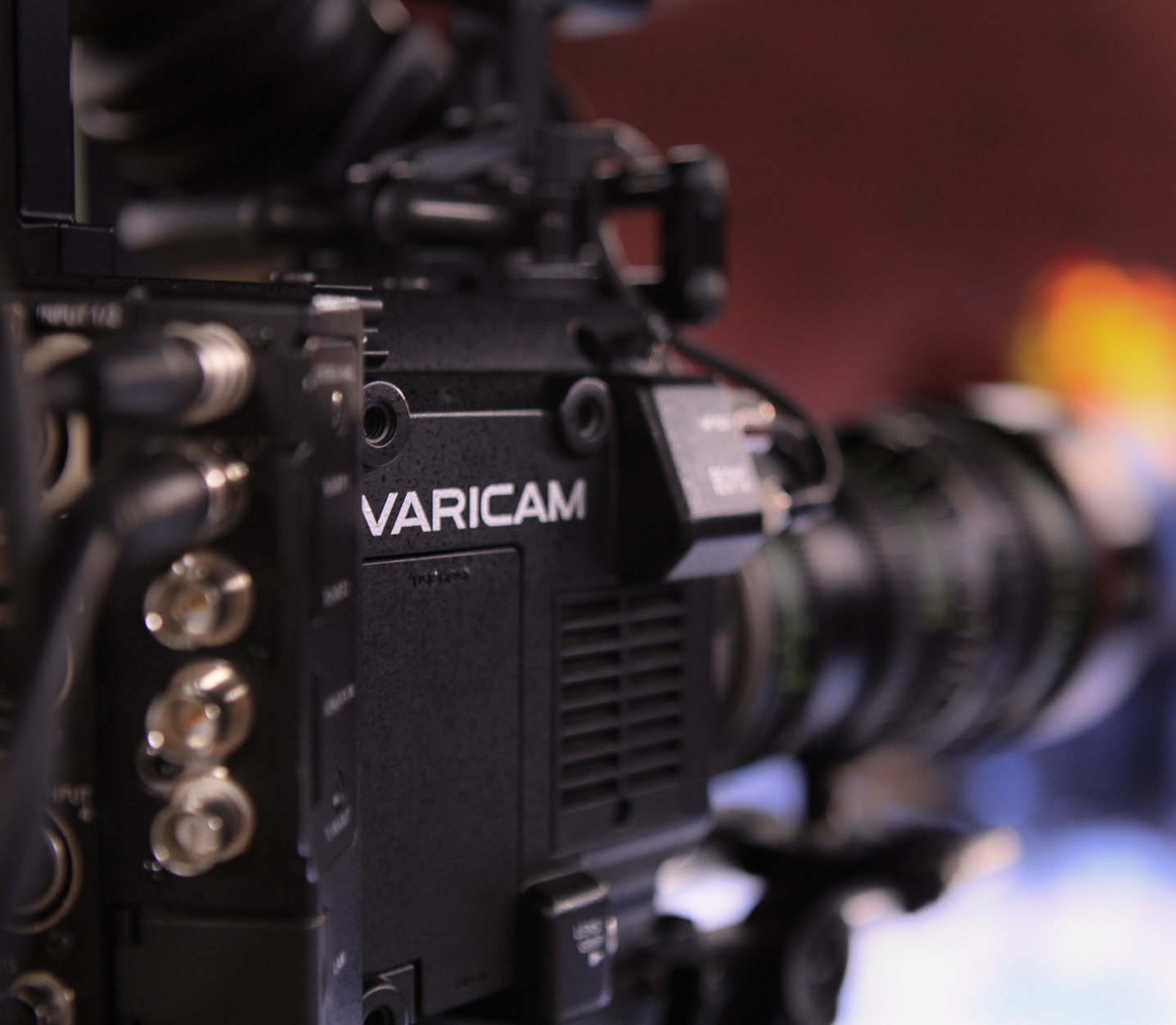