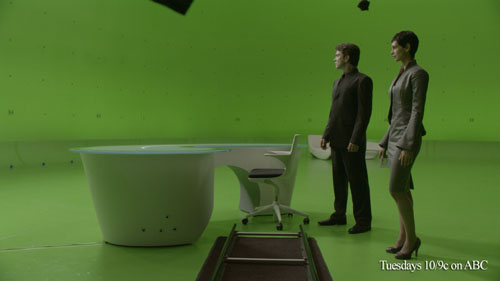 “The Visitors,” in spaceships hovering over every major city, captured the attention of the global population in V, the popular new television series on ABC. In much the same way, V has garnered the attention of the visual effects community, thanks in no small of the original 1983 miniseries, is filmed in Vancouver, where more than 20 Zoic artists deliver green screen and virtual sets. Additional visual effects (VFX) in V, including the series’ signature motherships, are executed at Zoic’s studio in LA.

“Our current big project is V,” explains Mike Romey, Pipeline Supervisor at Zoic Studios. “We are doing a sizable amount of VFX, a few hundred shots per episode.”

New episodes employ a growing number of VFX and virtual sets, reveals Romey about the upcoming season. “V is bulking up with more and more VFX shots, and virtual components and locations. With the Winter Olympics in Vancouver, we did more virtual set shots because they couldn’t get on location. It is a very exciting project, and it is pushing our technology limits to the edge.” 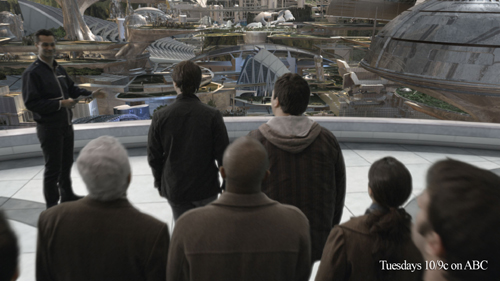 Romey is always on the lookout for innovative workflow solutions to further refine Zoic Studios’ production pipeline, which spans three locales. “My job is to look at what we do in production and find the right tools to meet our needs while balancing cost,” he says. To this end, he recently integrated a combination of MachStudio Pro software from StudioGPU and AMD’s high-end ATI FirePro V8750 graphics accelerators into Zoic’s existing workflow, which includes Autodesk’s Maya and The Foundry’s Nuke. 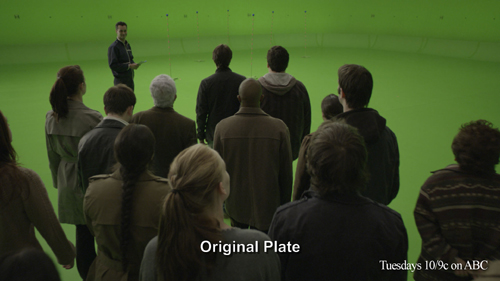 “The impetus for adopting MachStudio Pro in our pipeline was V,” Romey explains. “It has so many virtual set shots, and the V sets are quite robust. We wanted a new way to get a beauty render as quickly as possible. Given the volume of work and type of shots we are creating, MachStudio Pro was an ideal candidate.”

Romey and his colleagues broke down a V script into two types of shots: close-up shots and establishing shots. The close-up, face-to-face shots represented 80 percent of Zoic’s production work, for which they wanted to use real-time rendering off the graphics cards. They tried Nuke’s integrated renderer at first, but found they needed more, including specular highlights and ambient occlusion-and that’s why they turned to MachStudio Pro.

“We looked at the pipeline, and there were numbers that could be improved,” Romey continues. “Specifically, we started tracking the time it took to do rendering for production. We quickly realized that we had to come up with solutions in our pipeline that are more cost-effective and faster. We installed MachStudio Pro and ATI graphics cards from AMD, and the stats are really quite amazing.”

Romey, together with Zoic Studios’ research-and-development and IT personnel, set upon quantifying the use of MachStudio Pro’s real-time, GPU-based rendering in production. “We put MachStudio Pro into the mix to help make all this virtual set stuff render really, really quickly. We wanted to see how much time [our traditional workflow] cost us, and what we could have saved had we used MachStudio Pro for those two episodes.” 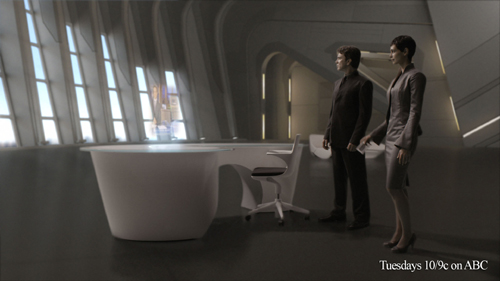 Romey and his team established a test case centered on a single asset in V, a virtual set used in two episodes, to calculate the time delta between the traditional pipeline with their traditional rendering software and the new pipeline with MachStudio Pro.

This Atrium virtual set, which appeared in 17 shots over two episodes, served as their reference. These 17 shots contain 2,589 frames, each of which was fully rendered three times for a total of 7,767 frames rendered. Initially, the set was rendered in an un-optimized fashion; it required recalculating the lighting simulation for each frame and yielded a render at four hours per frame. Zoic staffers tweaked the set and were able to optimize the render time to one hour per frame.

“With MachStudio Pro and our sets we could yield 16 minutes per frame un-optimized, versus one hour,” Romey says. “Optimized, we can probably chop 16 minutes down to four.” He and his colleagues are currently working with the developers at StudioGPU to build in some custom functionality, such as global illumination, self illuminating geometry, frame buffers, render layers, and passes more efficiently. All these features and requests will lead to a properly developed, GPU-based, frame-buffer pipeline in which multiple passes combine to rebuild the beauty render without the overhead of multiple renders.

Zoic Studios’ head of IT Saker Klippsten, noticed another boon: GPU rendering is green technology. With MachStudio Pro, Zoic facilities employed just 20 percent of their 450 CPU-based render nodes-translating into energy savings, cost savings, and a reduced carbon footprint. “We can use fewer machines and less energy to render the same footage in higher quality and less time. Really, there are so many reasons to embrace GPU rendering in a pipeline.

“The bottom line is: a MachStudio Pro pipeline will yield more versions with a better quality in a shorter period of time, giving us the added ability to provide a better product to our clients and be more competitive,” Romey continues. Real-time GPU render was once an alien concept. Today, Zoic Studios harnesses StudioGPU’s MachStudio Pro to deliver visual effects that are truly out of this world.

Complete with US, UK, and EU power cords, the Lowel EGO LED light comes with a color temperature range...

With a launch price of $351 the new Xiaomi Pad 5 tablet marks the return of the Chinese brand...