After a questionable year in 2020 we’re well into 2021 now. Seems a perfect time for some new Useful Tools for Editors 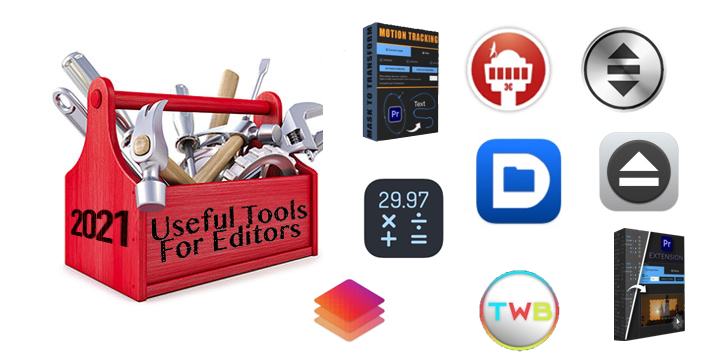 Here we are a year into the pandemic. I don’t know what that has to do with Useful Tools for Editors but I thought I would say it anyway because here we are a year (or more really) into the pandemic so it seems like something you say. Some are working virtually, some are working in person, some aren’t working near as much as they wish they were. No matter where you’re editing you might find some of these tools useful, especially if you’re working in Adobe Premiere Pro and Mac is your platform of choice (but not everything!).

You can also browse 8 years of Useful Tools for Editors as well.

The Adobe Premiere Pro extension architecture is a gift that keeps on giving as there is so much functionality that can be added to the NLE. Mask To Transform plugin for Adobe Premiere Pro is a little $25 utility that will convert the tracking data that can be generated from an effect mask and translate that into position, scale and/or rotation keyframes. It’s quite elegant and quite simply and can come in incredibly useful. 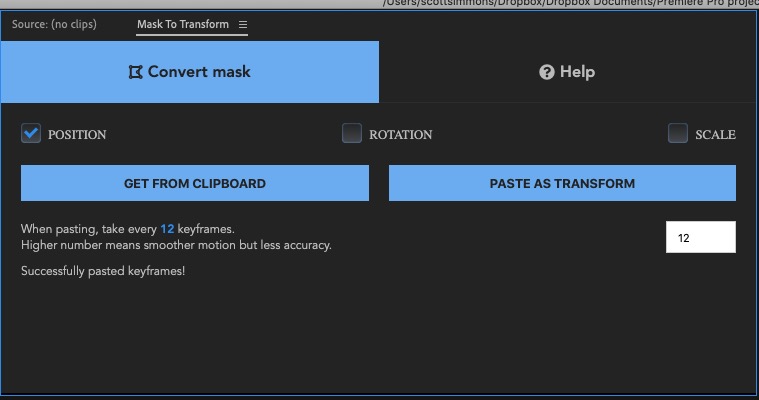 Of course you can do all this in After Effects but boy isn’t it nice to be able to quickly do these kinds of things like attaching text or graphics to an object on-screen or another method for stabilization. I’ve wanted to do this many times but just didn’t want to go to After Effects so it probably didn’t get done. But staying right in Premiere is so handy and useful.

This seems like something Adobe should build right into PPro since the foundation is there. It’s also worth noting that your track may not be as nice as what you could accomplish in After Effects but for many it will work and it is easy!

How about another nice Premiere Pro extension from Kamil? The $49 Drag Zoom Pro extension for Adobe Premiere Pro can be a big timesaver, perhaps that is why it’s more expensive than Mask to Transform since time is money. How often do you spend time getting your reframes just right by messing around with scale and position parameters or zooming the Program monitor in and out to use the bounding box? Even using the Loupedeck dials isn’t as easy as just drawing a square around the part of the frame you want to zoom to. 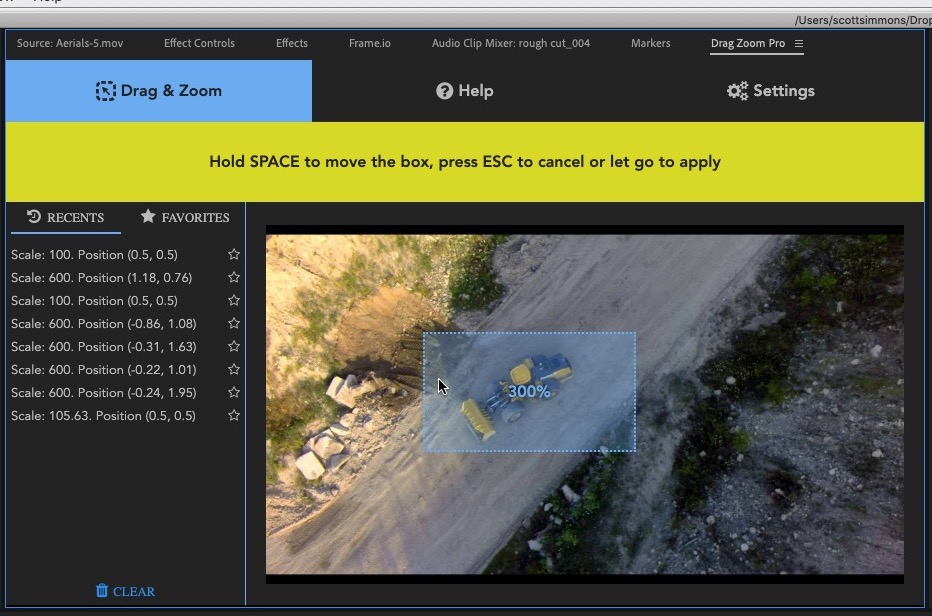 Think about the time you’ll save if you do a lot of reframing (and who doesn’t in a 4K, 6K world) and $50 is a good deal. Drag Zoom Pro doesn’t work exactly how you might think as you’re not dragging directly in the Program monitor. You have to use the Drag Zoom panel and refresh it to show an image of the program at the playhead on a selected clip. There is a pause as Drag Zoom Pro fetches the image. You also get a history of recent drag zooms and a way to save favorites.

Of note, when you install these on the Mac you’ll probably get an unidentified developer warning the first time you use them as a small supporting app has to run. These tools come from a small developer named Kamil Pekala and he has a small collection of tools for both Premiere and Lightroom.

I’m sure I’ve recommended the Timecode iOS app before as it has been around for years. Recently it got an update. For $7 you can install Timecode from the App Store and have it ever handy on your iPhone. I have used this thing more over years than more than I can possibly think. While it’s useful for the occasional conversion or adding up sections to get to a TRT, I’ve probably used the division feature more over the years than anything else. For example, taking 11 still images and inserting them evenly into a 7 second and 14 frame hole. That’d be 16 frames each. 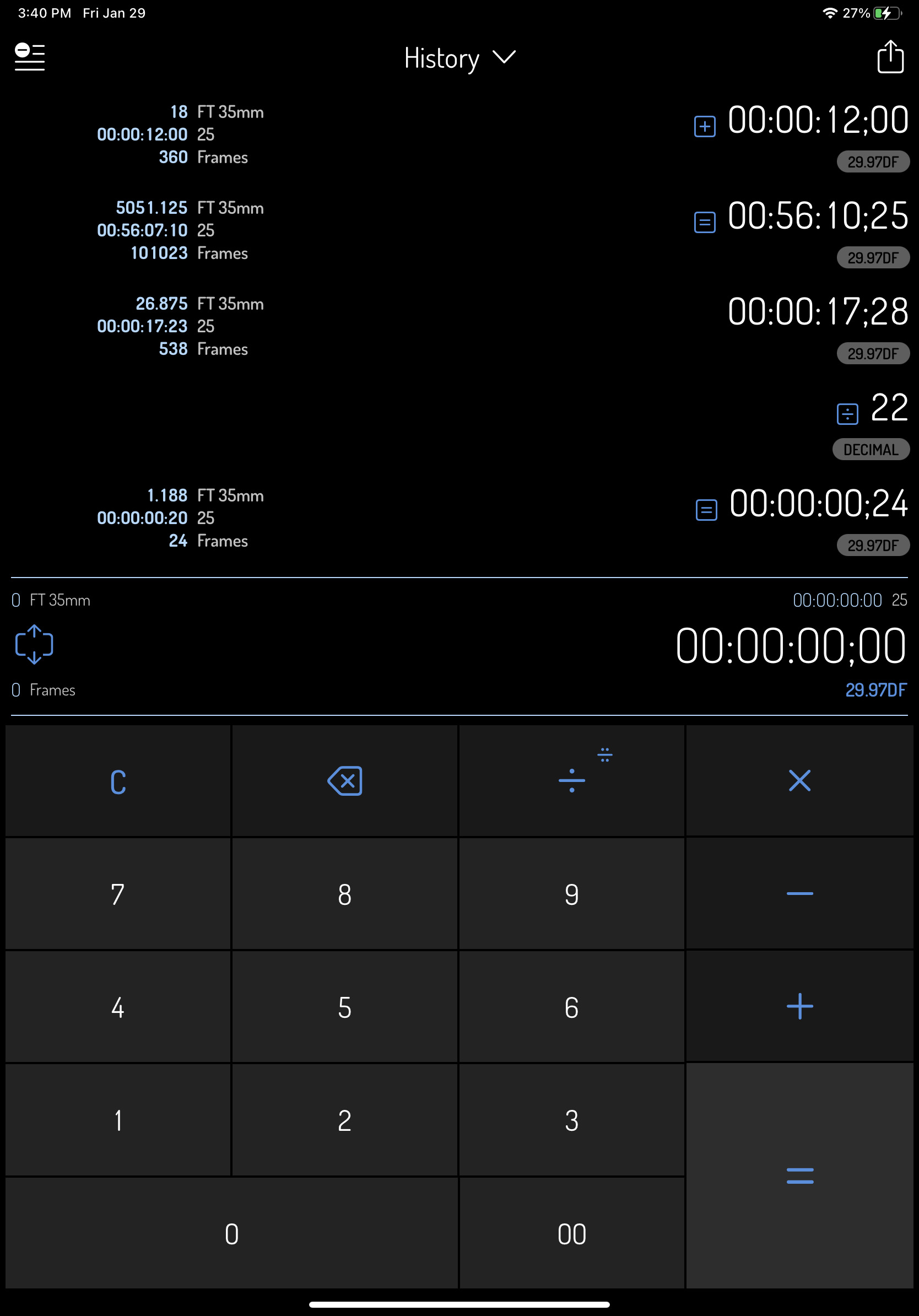 Thanks Timecode for all those calculations over the years. The newest version is freshly updated, rebuilt from scratch with full iPad support. App store link right here.

This is one that I can’t believe I haven’t recommended before. Default Folder X is a $35 utility that adds a ton of functionality to Open/Save dialog boxes on the Mac. Defualt Folder has been around for years and if I remember correctly it took awhile for them to adapt the tool to OSX. I recently rediscovered it and was happy to learn that I could get a discounted upgrade even though I haven’t interacted with the company in years. Thanks database. 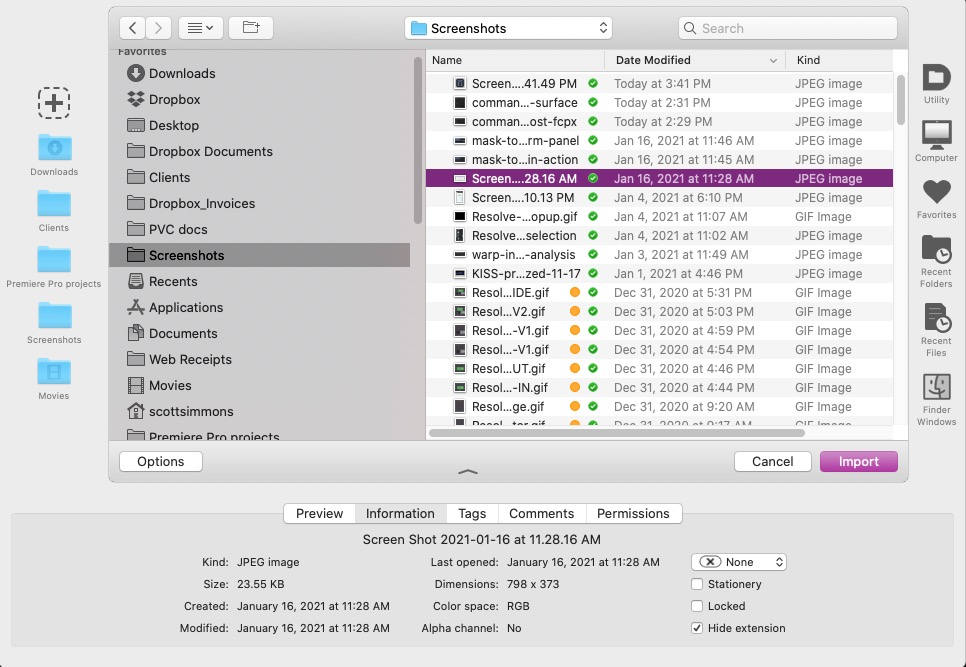 You can kinda get an idea of what Default Folder X does from the screen grab above. I’ve placed a few frequent folders on the left but there is a lot of power on the right as well. I love to be able to designate different favorite folders as I go through big projects and to assign a specific default folder per application. Utility adds a ton of Finder functions like move, rename, copy file paths and Quicklook just to name a few.

There’s an incredible amount of functionality built into Default Folder X and if you take time to really set it up, save your preferences and setup your different defaults you can save a ton of time. It’s quite granular what you can do with it. My favorite features is where, when an Open/Save dialog box is open, you can hover your mouse over open Finder windows in the background and a click will automatically navigate that Open/Save box there. It’s very slick and you won’t realize how useful that is until you use it. There’s a free trial so give it a try on your Mac.

As editors we have a lot of hard drives that we seem to have to mount and unmount seemingly all the time. Unmounting is often a right+click on the desktop drive icon but a remount can mean heading into Disk Utility or unplugging and replugging. How about some apps that can do it for you?

Mountain is a little $6 menu bar item that quietly monitors all the mounted and unmounted volumes and lets you selectively unmount and mount what you want, right from that menu bar. 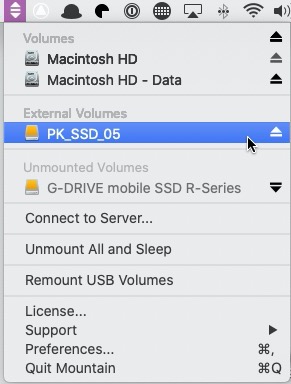 There are options to set custom hotkeys for different functions as well as customize different options for each disk. And if you have an application running that is preventing a drive from ejecting, Mountain will show you what that is and allow for a force quit. This is nice for the pesky apps you don’t realize are keeping a drive mounted.

Jettison is another app for this purpose. Clocking in at $5 it’s quite affordable and comes from the folks who make Default Folder X. 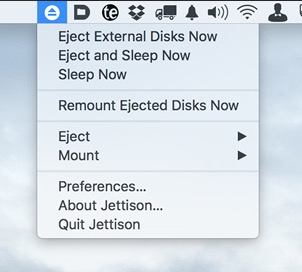 Jettison is also a menubar item that shows mounted disks and allows you to mount and unmount with ease. Like Mountain you can have it force quit applications that won’t allow an eject. Both of these utilities can also eject all your disks and put your Mac to sleep with one menu command. Quite handy.

You won’t realize quite how much time you can save with these things until you actually use them. Click over to the websites and decide which is right for you.

In the vein of the volume mounting apps above how about one for mounting servers, a NAS or any other shared volume? If you want your own menu bar item for that then try AutoMounter (Mac App Store link). This little item can mount multiple servers, mounting everything from SMB, AFP, WabDAV, NFS and FTP. There are a number of different options to configure it to your liking. 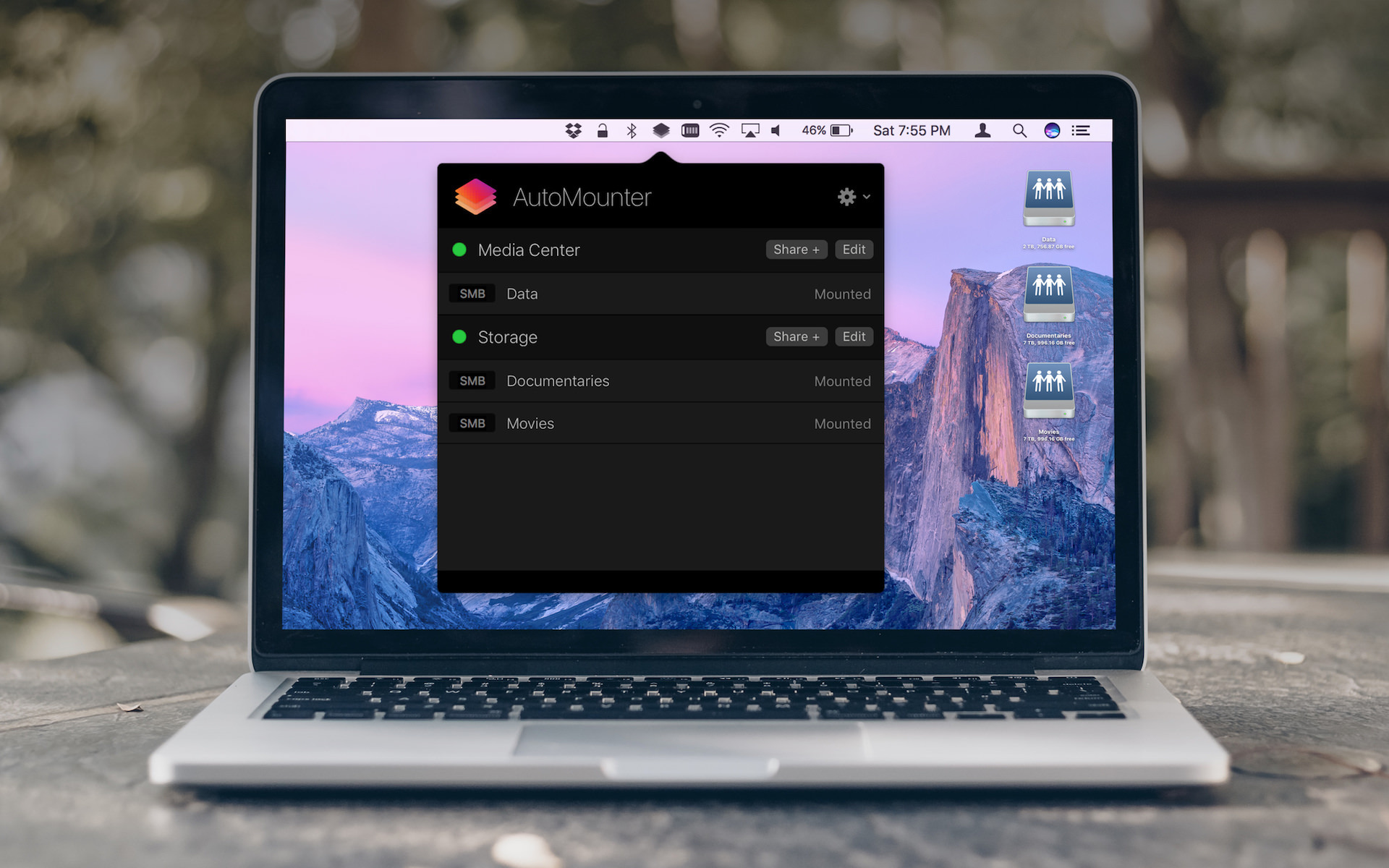 The application is $10 and depending on your need might require the in-app purchase of $4 for the Pro Settings Pack.

There was a time when Tangent control surfaces were all the rage when using DaVinci Resolve but now that Blackmagic makes a full line of color control surfaces they so they don’t really support 3rd party control surface hardware like they used to. I say that but honestly haven’t tried to use many different color surfaces in Resolve for quite a long time. But when I saw this open source tool called DaVinci Resolve Tangent Wave Booster I took note. Have a look at the video below and note some of the things that Tangent Wave Booster can add to your setup.

Looking over the Lift Gamma Gain thread where I found it, looks like it’s only available for Windows but a Mac version might be in the works. There is some setup to go through to get it working but if you have a big investment in Tangent hardware this might be for you.

Speaking of Tangent panels, this seems like a good prompt to mention that a fresh version of CommandPost is out and in the world. CommandPost is a little Swiss Army Knife of post-production and if you’re not familiar with it then you should take some time to read the CommandPost website to get an idea of what this thing does. On the surface it looks like a tool to unlock a lot of Final Cut Pro X features. But over the years CommandPost has added extensive support for most every control surface out there meaning you can use CommandPost as a one-stop software between your control surface and your post-production software. Here’s a few notable bullet points from this newest release (this is not anywhere near all of the features, just a few I have taken note of):

I think one of the biggest features of CommandPost is all that it can enable in Final Cut Pro. 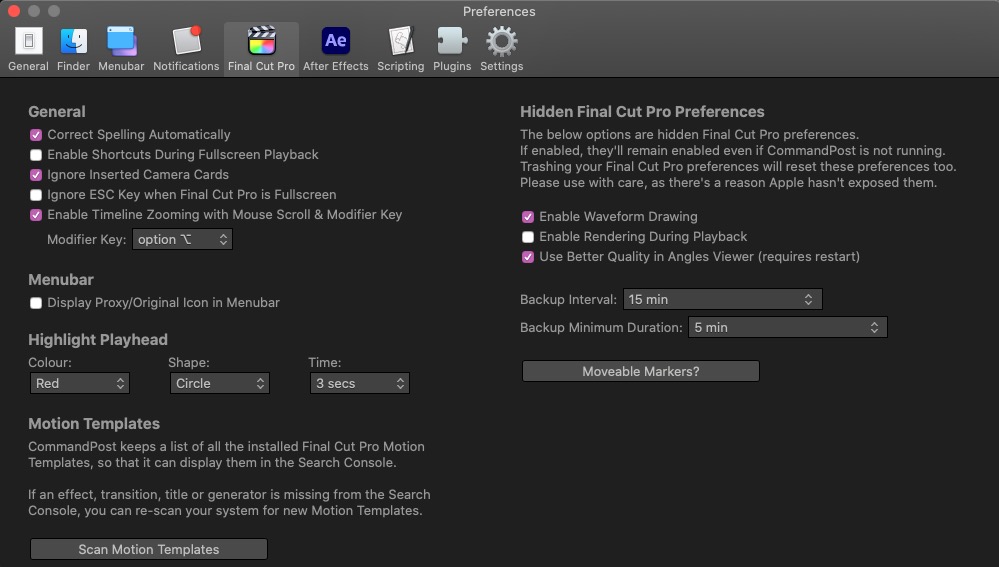 Oh, and also the extensive support for control surfaces. 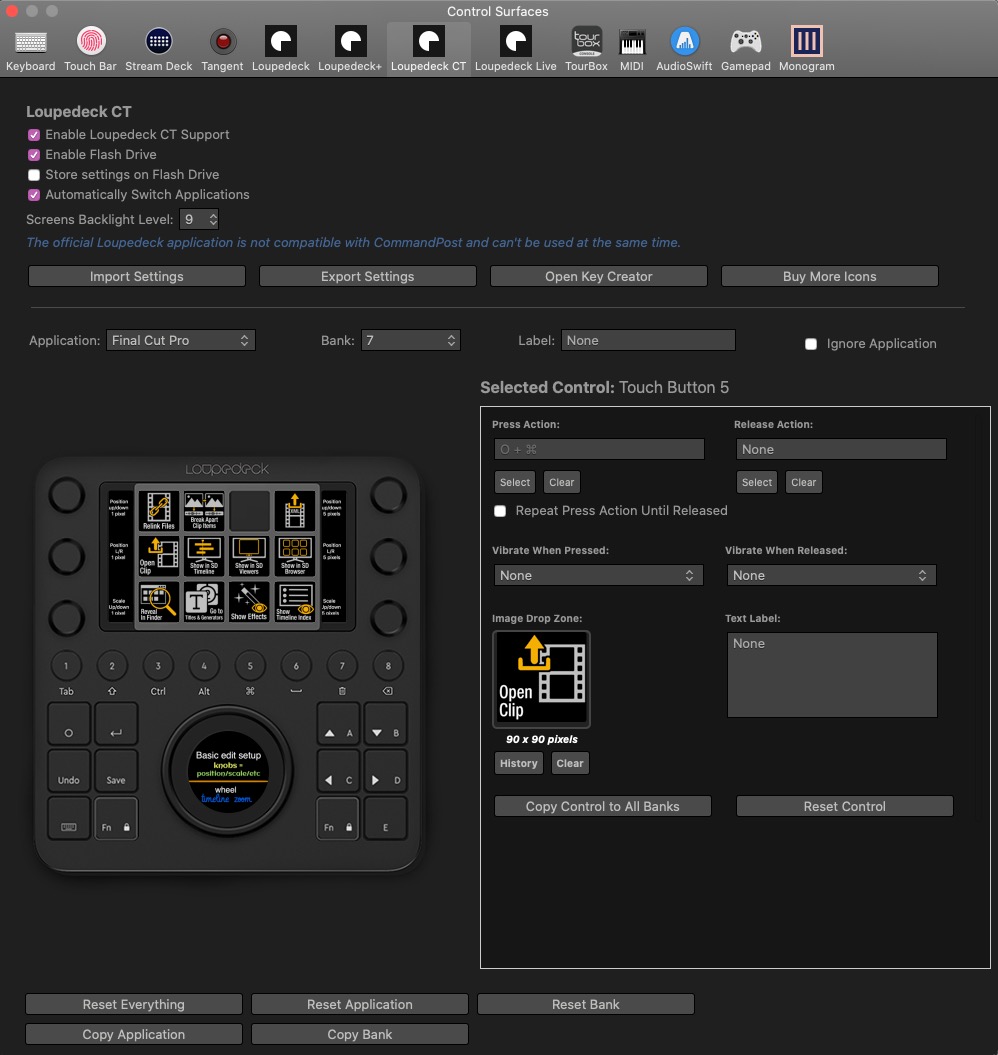 Above is my Final Cut Pro X setup for the Loupedeck CT. Those nifty icons come from Sideshow FX.

A brilliant friend and colleague has a cloud uprezzing service. Has anyone tried it?https://t.co/F3v05zJtKo

This website has pdf scans of computer magazines going back to fucken FIFTIES https://t.co/ubrVycfj17 https://t.co/15h5zbODg3

There’s no equipment in any of these simple at home workouts – so no excuses. https://t.co/ncF7JZE3nB #ToughMudder pic.twitter.com/7mPfKSW1cm

Your clients will be sending you a brand-new Form 1099 this year. Be prepared: https://t.co/ZqMvlRhnZO

For those who need a visual explanation of the Conspiracy Theory landscape pic.twitter.com/Unm1EH9E5j

Hey photographers (that’s *anyone* with a camera!) – check out “Arsenal 2, the Intelligent Camera Assistant” and answer this question…

It’s finally here folks – if you’ve ever wondered about getting started with Siri Shortcuts, this is the time! 📲

iOS 14 is out now & my new Shortcuts Catalog contains every action available in the Shortcuts app, plus 300 shortcuts you can get right now: https://t.co/0i6INDCqvk pic.twitter.com/z0zzBuiLAt

This gif does a terrific job of demonstrating the impact of lens compression. pic.twitter.com/MAXG11O7pq

This gif does a terrific job of demonstrating the impact of lens compression. pic.twitter.com/MAXG11O7pq

Imagine what a plot twist it’d be if it turned out Bill Gates wasn’t trying to inject people with tracking chips, and actually the tracking chip was in the social media app those people were using to warn people about Bill Gates.