It’s hot, it’s muggy and we’re still having to be socially distant or staying at home or quarantined depending on where you are. Unless you’re in one of those parts of the world that are in the cold days of winter then you have your own unique weather patterns to deal with.

Let’s start off with Boris FX as the folks at Boris have been very busy.

If you’ve ever imagined Photoshop being a plug-in right inside if your NLE or video app then Boris Silhouette Paint might be as close as you get. It’s a full paint, roto, touch-up, and fix-it tool for video. Boris Silhouette has been a standalone paint, roto, and compositing tool that has been available for a long time. Silhoutette Paint brought that tool right into the NLE or other supported host as a plug-in to do what it does: 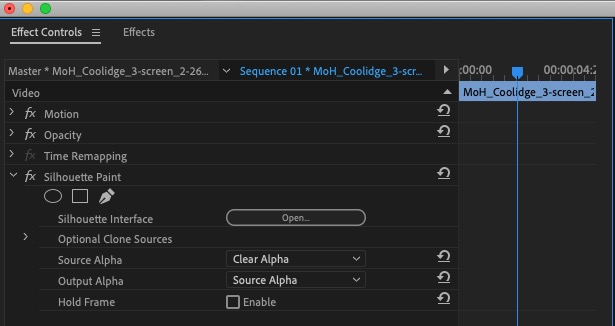 You can apply Silhouette Paint right to a shot in your NLE timeline and then harness the powerful paint effects including Mocha planar tracking without leaving the NLE. Now you do have to launch the Silhouette Paint interface and do your paint work and that interface is another world from your NLE. 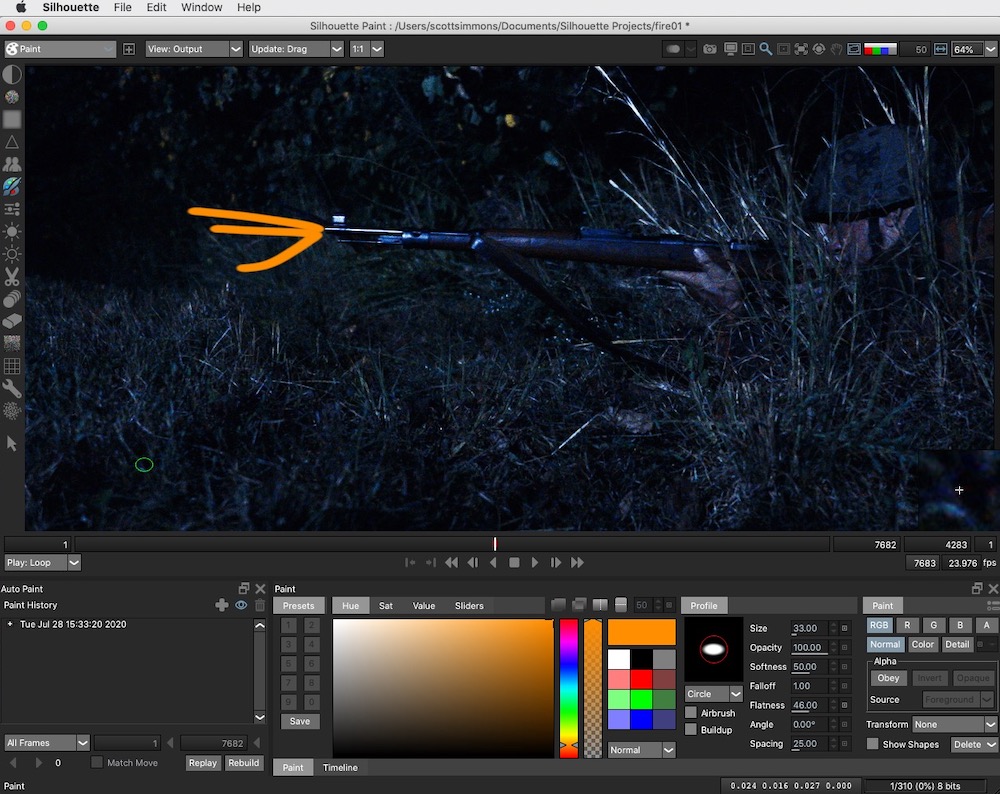 If you’re familiar with visual effects painting software you’ll feel right at home in Silhouette Paint. I’m not so you’ll probably be able to make a better muzzle flash than me. Thankfully there are a lot of video tutorials to help. 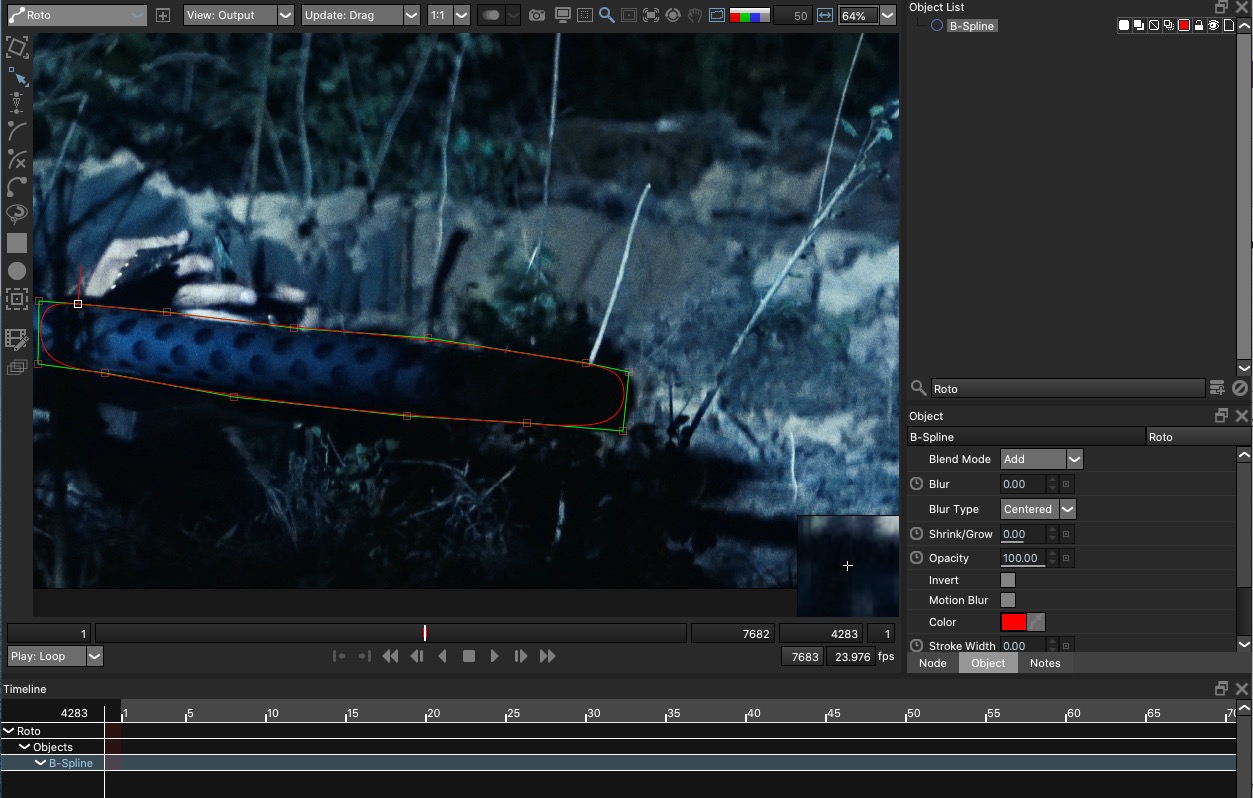 A flip of the menu in Silhouette Paint and you get full rotoscoping tools. Again, this is all without roundtripping footage in and out of your NLE. These kinds of things make me wish I was better at visual effects! Pricing ranges from $195 per year for and Adobe license to $395 per year for an OFX license that will run in Resolve and other hosts. Also, compare Silhouette vs. Silhouette Paint to get a better idea of the standalone vs the plug-in.

How about a free “easy-to-use, powerful, high-end particle generator that gives editors and artists instant access to photorealistic particle effects for motion graphics, visual effects, titles, lower thirds, and background graphics?” Boris recently released a free standalone version of their Particle Illusion software. It’s an app that honestly I have never used as particle generators and emitters are beyond the scope of the effects that I would ever do. But it sure is fun to play with. 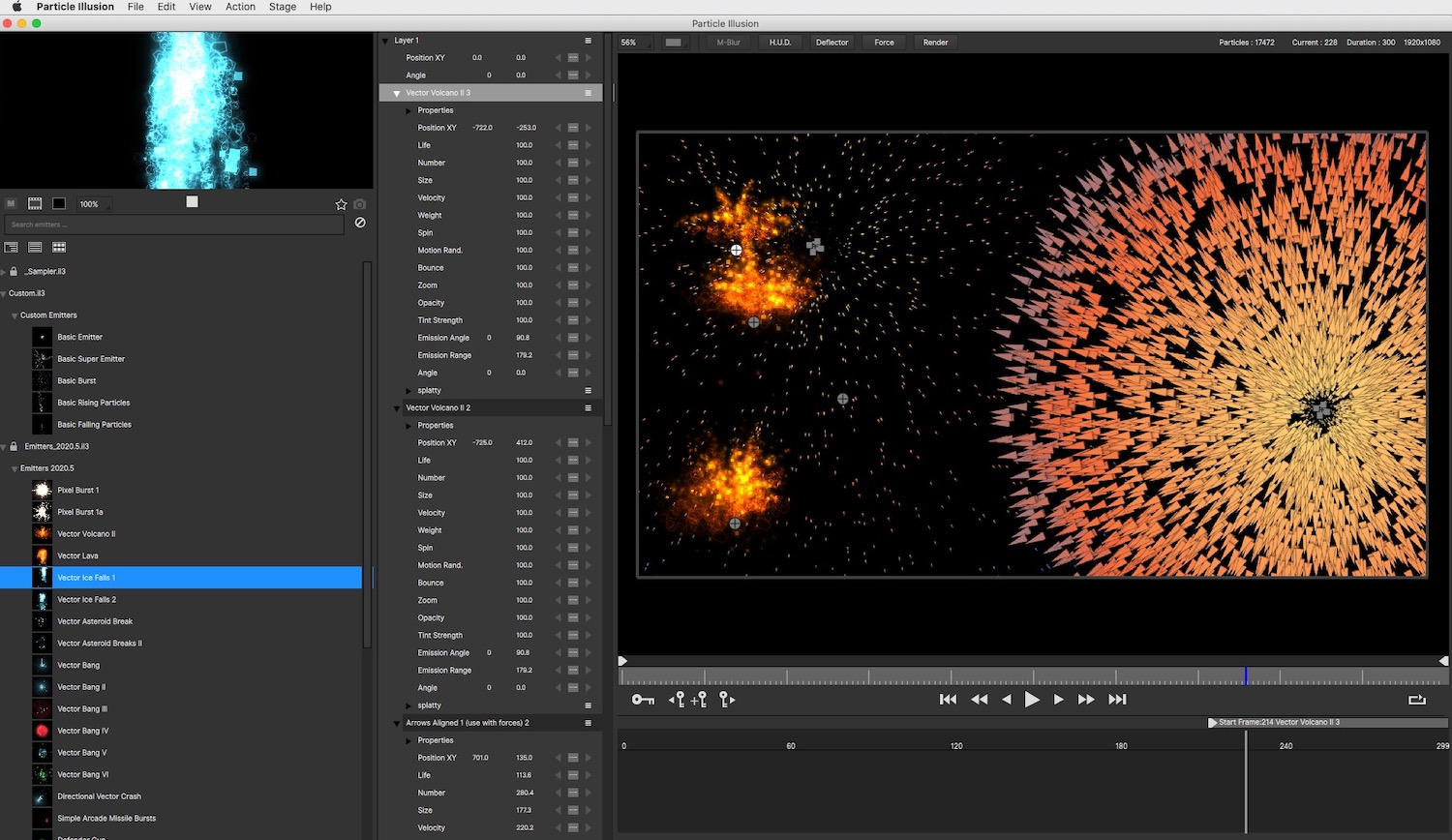 There are a lot of fun particles to play with in Particle Illusion. You can really build some nice backgrounds and since you can export a ProRes with an alpha channel from the free version it can be useful. There is a comparison chart of the standalone version vs the paid plug-in version so you can compare. If you want to buy the full $295 version (which is a piece of Boris Continuum) you get full host compatibility in all the NLEs (Resolve and VEGAS included) as well as After Effects and NUKE.

The last thing in this big Boris blitz of products is their first product for Photoshop and Lightroom, Boris Optics. At $99 for an annual subscription (or buy it outright for $149) you can bring some of that Boris visual effects magic to your still images. There are different modules you can select for the different effects you want to apply to an image. Things such as optical filters, film stocks and grains, lens flares, color correction and photographic effects will look familar to most editors out there. There is both a standalone version as well as the plug-in for Photoshop and Lightroom. 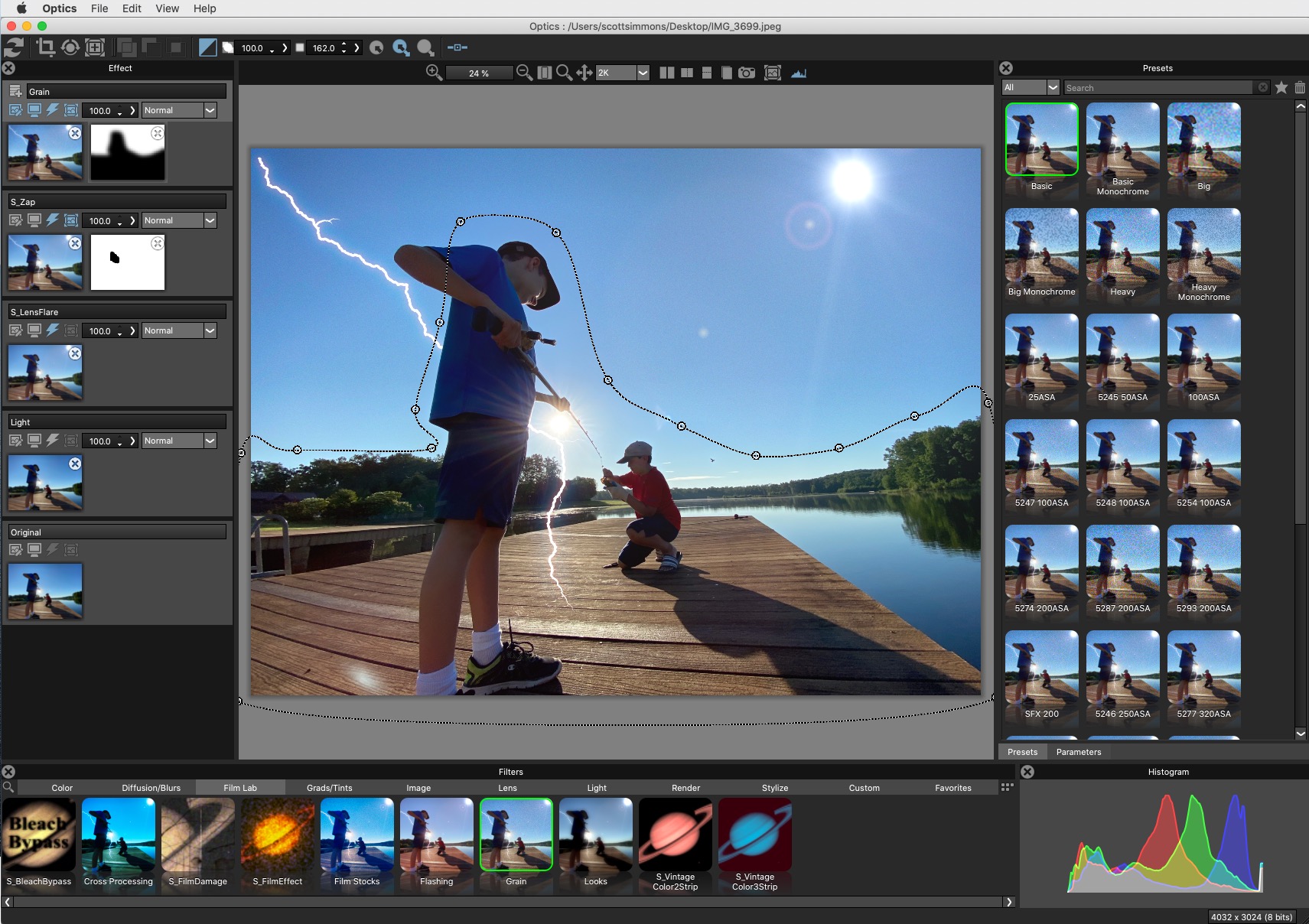 Yes there are two suns as well as lightning in the fishing picture above. Notice the layered approach to Optics on the left. Each layer can have masking to blend the effects. The different categories are listed along the bottom. Optics feels a bit like Magic Bullet Looks so the way you interact with the image is similar. It’s a lot of fun and you can really lose some time playing around with it. It’ll be a nice addition for photographers. Dig into some of the videos for more info on how to use Boris Optics.

The Levelator is an amazing little free utility from way back when with a singular purpose: take your AIFF or WAV file and level it out. It was designed for podcasting so it works great on voices. I’ve run interview audio through it in a pinch before and let it do it’s leveling thing before tossing it into an edit. It’s been around for years and one of the creators was an original inventor of Plural Eyes.

It’s nice to visualize the result when you’re done:

When The Levealtor is done it creates a new file with the -leveled suffix. There are not settings so what you get is what you get. Not a big deal if you don’t want to use it since it is free. Grab it on the Mac App Store but it’s also available for Windows and Linux but the download says it’s no longer being developed. A tweet from mid-June mentioned a new version so here it is in Useful Tools!

And speaking of consistent audio levels there also Levelmatic from CrumplePop. This is a plug-in for your NLE that will attempt to level out the uneven dialog in your edit. I really love the idea of doing this dialog leveling in an automated way to help avoid the endless keyframing that it often requires. It’s never perfect but if your audio isn’t too bad or too uneven it can be a big timesaver. Yes, you already have compressors and auto-matching built into your NLE but something like Levelmatic will probably get you closer to a final result in a faster and more visual way.

When you watch the Premiere demo vs the FCPX demo you wish that Premiere would adjust the waveforms when levels change. Levelmatic, Mac only, is currently $69 (regular $99) and available via the FxFactory distribution system. I must say I can’t help but notice how similar the CrumplePop tools look to the Accusonus ERA audio tools. 🤔

Video Walls 2 is $49 and distributed via the FxFactory platform.

How about using your chapter markers in FCPX and Premiere as chapter markers in your YouTube uploads? It’s a great idea and Creator’s Best Friend makes this possible. This new app costs $10 from the Mac App Store for FCPX and $10 for Premiere. It comes to us from Intelligent Assistance. It’s a clever idea. I think the time savings could be quite substantial as it’s much more efficient to make those chapter markers in the NLE timeline as you go through the edit rather than spending the time doing that in the YouTube interface. Speaking of YouTube, here’s how to use it:

I’m not sure about that broken heart app icon though. It should be a happy icon!

Creating closed captions is one of those necessary evils of delivering broadcast tv or even for the web. While all of the NLEs have capable captioning tools built in these days there are occasions where a dedicated caption tool might come in handy. For years one of the most used and most expensive tools came from Telestream but a new option is Closed Caption Creator. This subscription-based product is cross-platform, includes spell-check, and the abilty to create SRT files and a whole lot more depending on the level of the service/software you buy.

Of particular interest might be the automatic speech-to-text caption option, automatic translation and automatic scene detection. I don’t know if a tool like MacCaption can do all of that or not (I don’t do a lot of captioning) but considering that the Telestream products start at nearly $2,000 it’s great to see another entry into this market. I haven’t tried Closed Caption Creator so if you have please let us know how it works in the comments below. Thanks Jason for finding this one!

De-Re-Branded Icons for your Adobe applications

There was a lot of bitchin’ about Adobe’s recent update that changed the icons from a colorful menagerie to drab conformity. Okay, yea whatever but if you want to make them look more like old times how about a free batch of De-Re-Branded Icons? Thanks to Element Supply you can download the more diverse Adobe icons of old.

That’s really all I have to say about that but thanks to Element Supply for those.

The above image is from the Indiestor website. There are bin lock icons! A little googling around reveals a lot of discussion about using Mimiq a range of shared storage systems like a Jellyfish, TrueNAS, and QNAP. Or how about Mimiq on cloud-based shared storage like LucidLink. And of course, there’s a reddit thread talking about it too. You’ll have to contact a reseller like Bridge Digital if you’re interested.

If you’ve been looking for a replacement for MPEG Streamclip then take a look at Shutter Encoder. It’s free and is a”converter designed by video editors.” I haven’t used it as I heard about it in a tweet but reading over the features it looks quite nice for a freebie. The functions are extensive including full audio support, the ability to rewrap with encoding, disc rip and burn, audio analysis, and the ability to download web video. It says it also supports intermediate codecs like DNxHD, DNxHR, Apple ProRes but I’m going to guess those aren’t official licenses so beware that broadcast QC might flag them. Speaking of Avid it will also generate DNxHD OP-Atom files! And it looks like it can copy directory structures among a ton of other features.

The thing I’m intrigued about is that it can show you the audio waveform for a file. That’s cool. 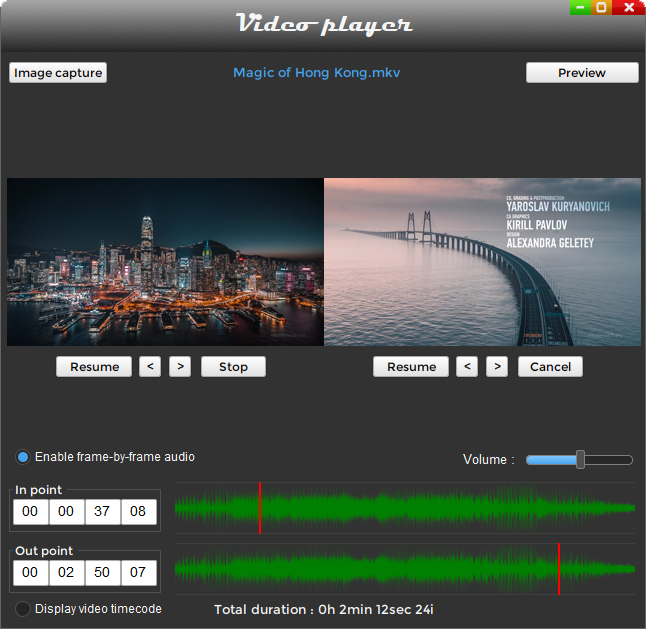 The above image is from the Shutter Encoder website. Scroll down through the settings and you’ll see this is a quite full-featured little tool. It’s a fully cross-platform tool and according to the developer is based on FFMPEG. This is one to keep an eye on.

In addition to the new shiny Stock Audio in Premiere Pro, there are some other under the hood improvements as we continue to improve performance, like faster app launch time, especially first launch.

That’s the script for The Modern Ocean. I kept it quiet for a long time because…I don’t like scripts because they are not movies and movies are not film and I just didn’t want to be embarrassed. But now I think it might be fun. It’s all good, now.

Irish Screen Editors have compiled a downloadable pdf guide to working remotely at home for editors and assistants. You can get it here https://t.co/j0dMYujpMV @irishscreenedit @screenskillsire

A PSA for Blue Yeti Microphone users:
These are side-address microphones, so you need to speak into the side of the microphone that faces the logo.

They are not intended to be spoken into from the top.

Here’s that free tool I made for Fusion (#Resolve) to arrange pictures into a grid. Copy/paste it from my site if you want it.#blackmagicdesign #DavinciResolve #colorgrading #vfx #indiefilm #filmmaking #Postchat #postproduction #fusion #contentcreation #contentcreators pic.twitter.com/zRlTAisx2F

A couple of free tools for After Effects to make a grid for the number of layers in your comp. On my blog page if you want them. pic.twitter.com/GXfXZLBOLn

Want to use Mocha for After Effects to replace any surface? Start with a stop sign! This tutorial co-produced with School of Motion wastes zero showing you how it’s done…https://t.co/x2tNTVA13V 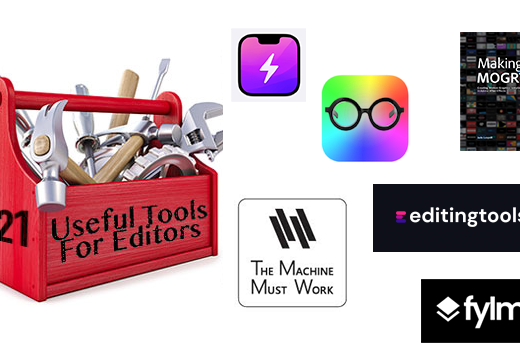 It’s been nearly a year since I published a Useful Tools for Editors column so the coming end of...