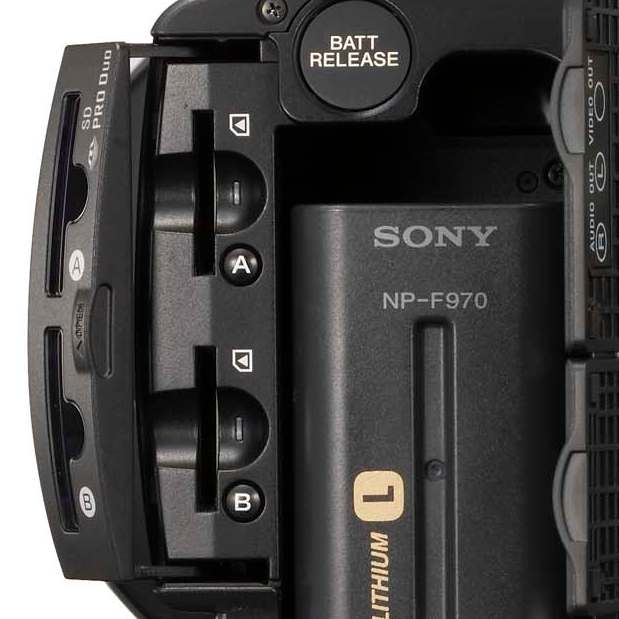 Sony officially rolled out the HXR-NX5U today, which I had been calling the “Prime” in my preview article. Now, the remaining puzzle pieces can be revealed…

The HXR-NX5U camera’s suggested list price is US$4950, the same MSRP the HVR-Z5U had on its release.

Both will be available at the end of January 2010.

The NX5U’s card slots will have contacts on the left for MS PRO Duo, and on the right for SDHD cards. Simply insert the card type of your choice with the notched corner down, as shown in the graphic on the card slot itself (see the image of a production NX5U above, courtesy Sony), and it’ll work. So please: no whining about media types. (For the record, Sony says that their PRO-HG Duo media is faster than high-speed SDHC cards, with a transfer rate of 20 MB/sec—if it were an SDHC card, it would be speed class 20. If you have the need for speed, PRO-HG Duo still buys you something.)

Also, the consumer version doesn’t use the NXCAM label; I take that to mean that NXCAM will be Sony’s Pro AVCHD branding, just as Panasonic calls their Pro AVCHD “AVCCAM”. Price on the consumer cam appears to be $3500; I had been told it was only $500 less than the NX5U, but Amazon lists it for $3499.99, shipping 8 February.

I have updated the preview article with this new information.

(The NX5U is, of course, the USA model. Other countries will have NX5 models with other letter suffixes.)

Sony sent me a prototype HXR-NX5U with Flash Memory Unit for review. I will return it to Sony at my own expense.

Sony updated me early on 6 Jan 2010 with the information given above, and supplied the photograph, and lifted the embargo on this info as of 4:30pm PST.

All hardware, software, and documentation sent to me for the review will be returned to Sony; I’ll retain an electronic copy of the preliminary user’s manual for reference.

No material connection exists between myself and Sony; Sony provides no compensation to me for reviewing equipment and has not influenced me with payments, discounts, or other blandishments to encourage a favorable review.