At 4:30pm PST November 12, 2014, DJI launched a new concept in sUAV design specifically for the professional aerial videographer and photographer. I was happy to be invited to this special event with a few of my colleagues and share the specifics around this new aerial craft with you. *LATEST UPDATE 11/16 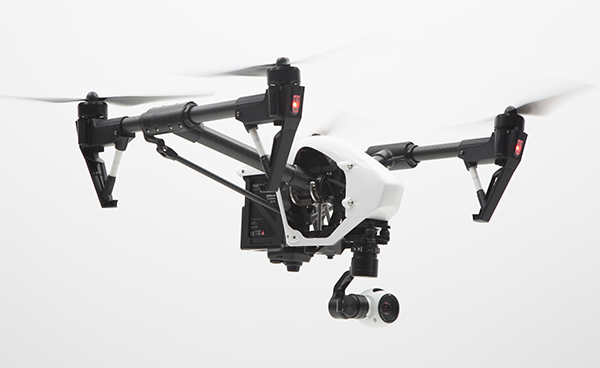 DJI, a leader in personal sUAV (small Unmanned Aerial Vehicle) development with the popular Phantom, Phantom 2, Vision+ and an array of larger multirotors like the S900 and S1000, unveiled something very new on Nov 11, 2014 in their first ever public launch event. I attended the event and am sharing my experience with you, plus all the info on this new design in Quadcopters, the Inspire 1 (T600).

You can watch the recorded Live Stream on YouTube which featured Eric Cheng from DJI giving a presentation with special guests Adam Savage and Jamie Hyneman from Mythbusters:
(Skip to about 15:00 when the presentation starts)

I was honored to be in good company as well, with fellow colleagues and other techies such as these folks pictured clockwise from top left: Robert Scoble, Barry Blanchard, Russell Preston Brown (Adobe) & Abbe Lyle and Eric Cheng (DJI) with Robert Scoble engaged with their mobile devices. 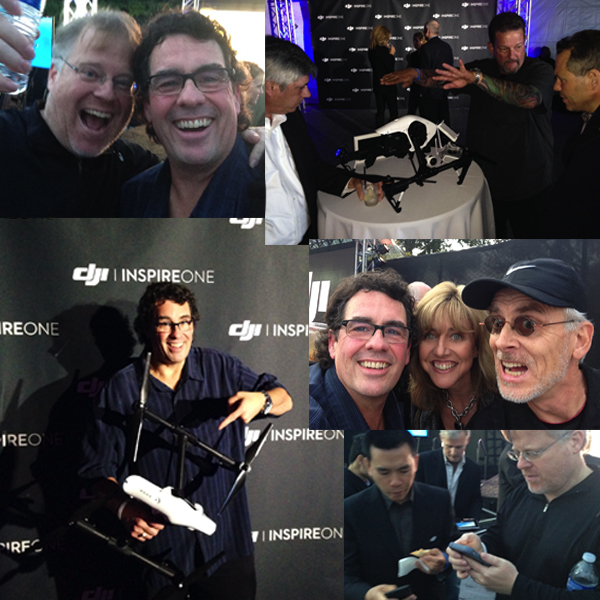 What folks are asking for are details, details, details! I’ll give you everything I know to date, but since I don’t have a unit in-hand yet, I can only pass on the info provided to me from DJI directly for now – directly from their press release:

In addition to incorporating a groundbreaking 4K aerial camera, the Inspire 1 camera maintains stability even in strong wind conditions via an integrated 3-axis gimbal.
The Inspire 1 integrates DJI’s patented wireless HD transmitter, Lightbridge, and comes with a fully redesigned mobile app that runs across both iOS and Android devices, broadcasting 1080p video at a distance of 1.7km.

With the touch of a button, the Inspire 1 takes off and will transform itself into a “V” position, allowing pilots to capture images from any angle. Similarly, the revamped “dynamic home point” function enables pilots to ensure their unit always knows where they are and can return to them safely.

During flight, the platform stabilizes itself using a downward facing “Optical Flow” camera that uses a stereoscopic image of the ground to ensure it does not drift, even when flying indoors or without GPS.

The DJI Inspire 1 also comes with a brand new 6-cell battery, enabling it to spend up to 18 minutes in the air. Pilots will be able to monitor each cell’s strength through the app to ensure safe flight, in addition to DJI’s signature automatic landing function in the case of low battery.

Here’s the official full list of features and specs from DJI: 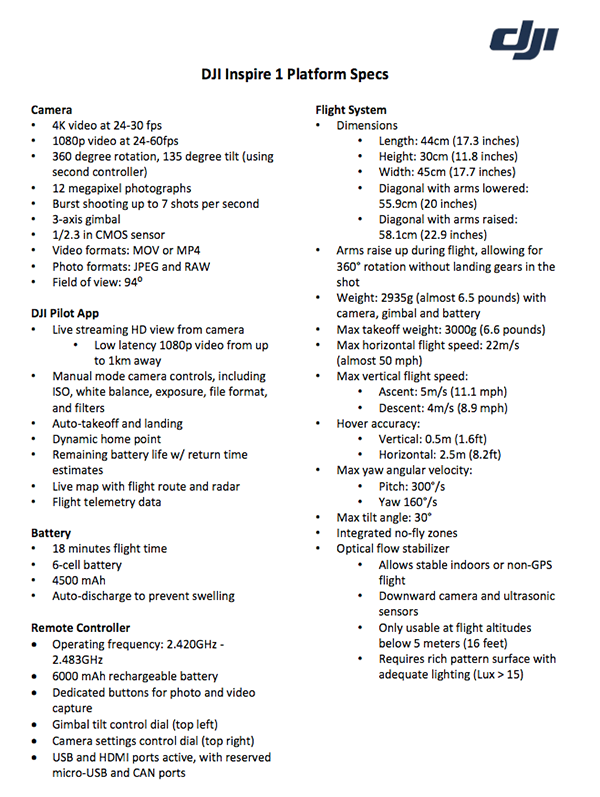 DJI’s Eric Cheng shared a screenshot this morning showing the QuickTime mov specs from a 4K file shot with the Inspire 1, showing the DJI AVC encoder and a Data Rate of 66.13 mbits/s 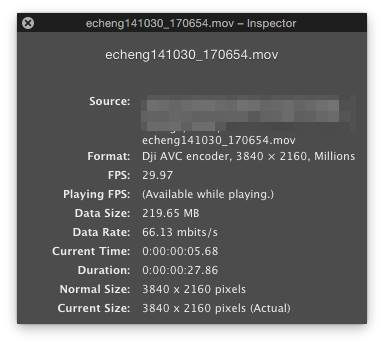 In addition to the 4K video capabilities from the Inspire 1’s stabilized camera, the 20mm lens is distortion-free (no barrel/curve) and captures a 94-degree wide angle, as opposed to the GoPro or the Phantom 2 Vision+ which are closer to 140-degrees.

Here are some amazing shots posted by early-adopter test users Skynamic from their YouTube channel, of raw 4K footage at 30fps:

One of the biggest issues aerial videographers have with the smaller quadcopters is in keeping the props and landing gear OUT of the shot! This is especially annoying in windy conditions or under hard acceleration.

The automatic “V” transformation of the Inspire 1 after lift-off allows the body of the craft along with the camera and gimbal to drop down below the visible range of any of the flight control surfaces or hardware. Plus the ability to rotate the camera around 360-degrees as you can in the larger heavy-lifter multirotors with very expensive gimbals and cameras. 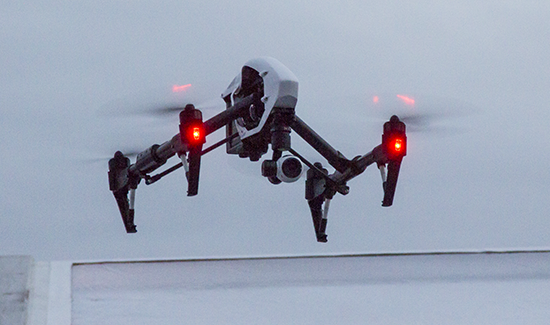 The Inspire 1 also uses DJI’s Lightbridge technology for HD FPV (First Person View) monitoring. This is a huge boon for videographers trying to line up the perfect cinematic shot and precision POV angles without the signal interference and loss typical with most FPV systems currently available.

This was shown to us live during the event, where the Inspire 1 was flown high above the stage and aimed back down with the FPV signal presented live on the big screen. 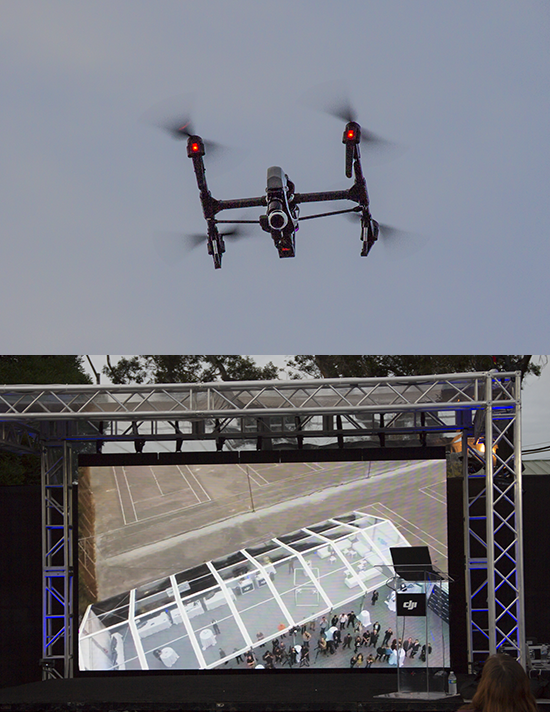 This is the real game-changer for flying indoors or under a large roof/canopy and still maintain stability without GPS. The sensors also sense when the craft is close to the ground and automatically lower the landing gear. 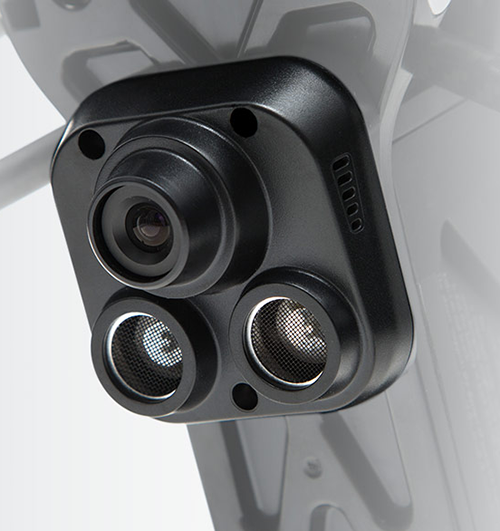 A completely new software App is available to download for the Inspire 1’s manual flight controls and camera/gimbal operation, and more. This will give you HD FPV and controls at your finger tips on your device. 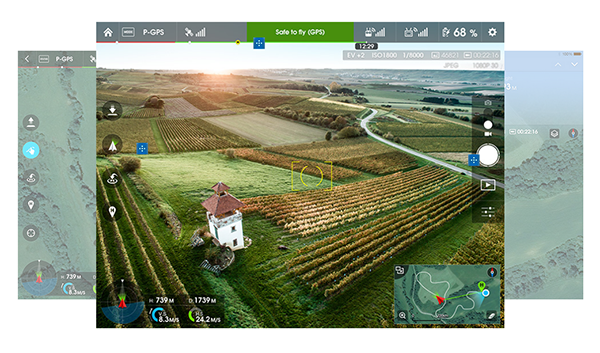 Here are the listed Flight Modes for the Inspire 1: 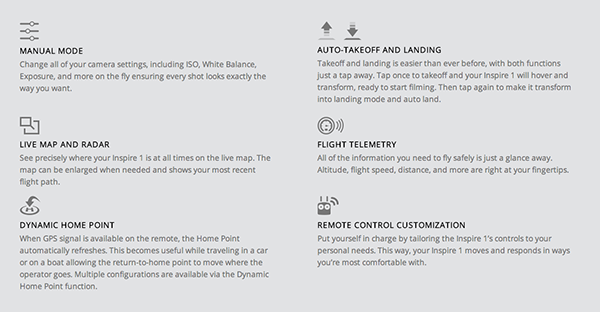 The Inspire 1 can be operated with two people for getting more complex cinematic shots. By adding a second controller and tablet/mobile device to the system, you can have one operator control the flight of the craft while the second is operating the camera/gimbal controls independently. This is typical for more advanced multirotors. 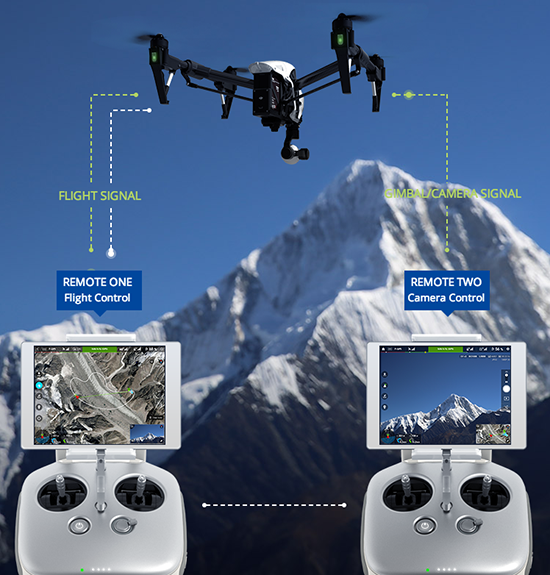 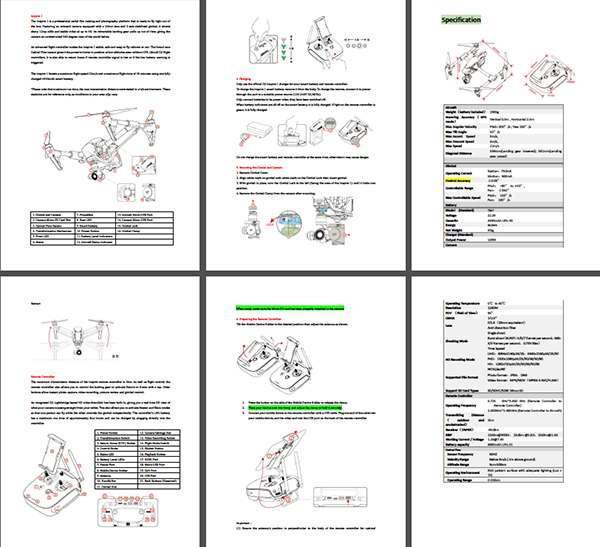 Adorama is taking preorders on their website, as is DSLRPros and B&H Photo – and of course you can buy direct from the DJI store online. Other dealers and resellers should be offering presales and taking orders soon as well.

Judging by the information I’ve seen so far, the features and capabilities of this new breed of sUAV is really going to be a game-changer, and for the price point, it really looks like it will deliver a lot for the money.

While some may balk at the price, the inability to carry heavier payloads or different cameras, or limited battery life, I still think the Inspire 1 fills a much-needed gap between the smaller hobbyist quadcopters and the much more expensive multirotors flying DSLRs and larger video cameras – all for about the price of a larger 3-axis gimbal alone. I’ll be anxious to see where this pushes the industry over the next 12 months!

Look for a real hands-on review soon as well.