You no longer need a professional app like FiLMiC Pro to shoot 25p with your iPhone, but you’ll probably want to use one anyway.

Since my first articles in ProVideo Coalition magazine in 2008, the elusive 25p (aka 25 fps) framerate has been a recurring theme for different reasons. One of the most recent one was when we became aware that the teleconferencing giant Zoom.us was exclusively using the 25p rate for connected cameras (link ahead to my best practices article). Up until very recently, people who lived in an ex-NTSC country and wanted the 25p (or 50p) option needed to be sure to acquire a “worldcam” camera since segregated cameras intentionally make 25p (and 50p) unavailable in these areas. Up until now, if you ever wanted to shoot 25p with an iPhone, regardless of where it was purchased (including PAL or ex-PAL territories), you had to purchase a pro app for the iPhone (i.e. FilMiC Pro) to access this and other exotic framerates. However, starting with iOS version 14.3, there has been a hidden option to unlock 25p in your iPhone. Ahead, I’ll explain how to unlock the 25p option, give credit to my sources for this information and explain what Apple expressed inappropriately.

Credit to the sources

I became aware from this thanks to Mark Robertson, Marc Blanc Settle and SmartFilming.blog.

How to unlock the 25p option 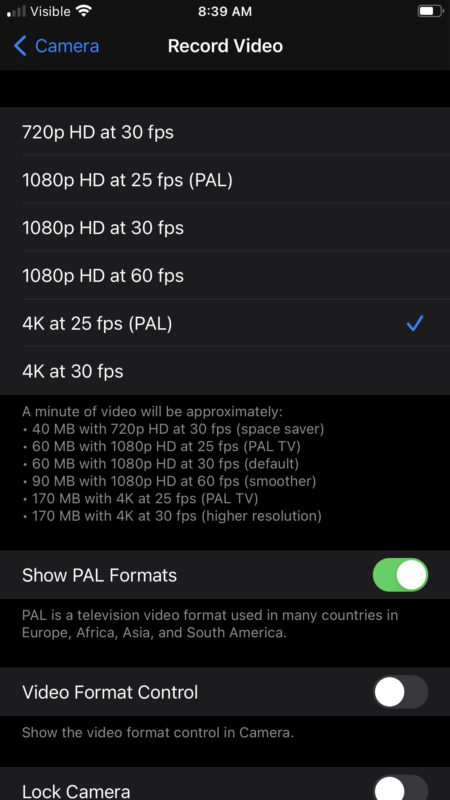 In the Camera apps settings inside the iPhone settings, you’ll find the special option called Show PAL Formats as indicated in the screenshot shown above. Then you’ll suddenly have the 25 fps an option available in certain spatial resolutions like 1080p and 4K. Sadly, Apple’s use of the term “PAL” here is inappropriate. I’ll explain why ahead.

What to do if you don’t immediately find it listed

If for some reason you don’t see it listed (even though your iPhone is running iOS 14.3 or later), go and change from High Efficiency (H.265) to Most Compatible (H.264), activate the option indicated in the prior section, select your desired spatial resolution with 25 fps, and then switch it back to High Efficiency (H.265) if desired.

PAL is the name of an analog television system which competes (or competed) with NTSC and SECAM which are (or were) all analog television systems. The full specs of the PAL television system include many details. Those details include the number of analog lines (625 except in PAL-M in Brazil, where it was 525), the way the color is was encoded in analog, and the way it was broadcast as an analog transmission, including the color subcarrier frequency, which varied with different versions of PAL. None of those characteristics that define a PAL signal is included in any iPhone, since the iPhone only records a digital signal. In addition, the PAL signal was SD (standard definition) and the iPhone records only HD (720p or 1080p) or 4K.

The only detail that is indeed derived from PAL is the framerate: 25 fps (aka 25p when it’s progressive).

As a result, Apple should correct the labeling to say 25 fps (PAL derived).

ISSUE 2:
In the screenshot (or on your iPhone), you’ll see some help text below that option which is named Show PAL Formats which should be called how PAL-derived Formats. The text currently says:

PAL is a television video format used in many countries in Europe, Africa, Asia, and South America.

Actually, very few countries ever used PAL in South America. Before switching to some type of digital television (DTV), Argentina, Paraguay and Uruguay used (or perhaps still uses to some degree) the rather unique PAL-N, while Brazil use (or perhaps still uses) PAL-M. French Guiana (located in South America) used SECAM, not PAL, but switched to digital DVB-T in 2011. (SECAM uses or used the same framerates as PAL, but has/had other differences.) All of the other countries in South America used (or perhaps some still use) NTSC, not PAL. However, with the shift to DTV (digital television), it is no longer PAL or NTSC. The only remaining detail from NTSC or PAL is the framerate. That’s why when referring to 25 fps in these contexts, the closest thing that would be accurate (if desired) is to say “PAL-derived”. Almost all of the countries using PAL are currently in the process of conversion, or have already converted transmission standards to DVB, ISDB or DTMB, so Apple please correct update this as instructed here!

I am very glad that Apple has finally added 25p (25 fps) to the iPhone’s native camera app. I hope that Apple makes the nitpick corrections I mentioned in the article, for the sake of proper education of users. I also hope that Google will add the 25p (25 fps) option to the GCam, the Google camera app. If it exists already, I haven’t been able to find it. Of course, there are many other advantages of using a pro app like FilMiC Pro: much more control and lower compression (at least until ProRes comes). However, at present, FiLMiC Pro doesn’t seem to be offering any purchase option for owners of de-Googled phones. (That’s a topic for an upcoming article.)