Real-time rendering and cinematic storytelling are two key elements of Unity’s presence at Siggraph 2017, giving artists the tools to unlock the full potential of their creativity. 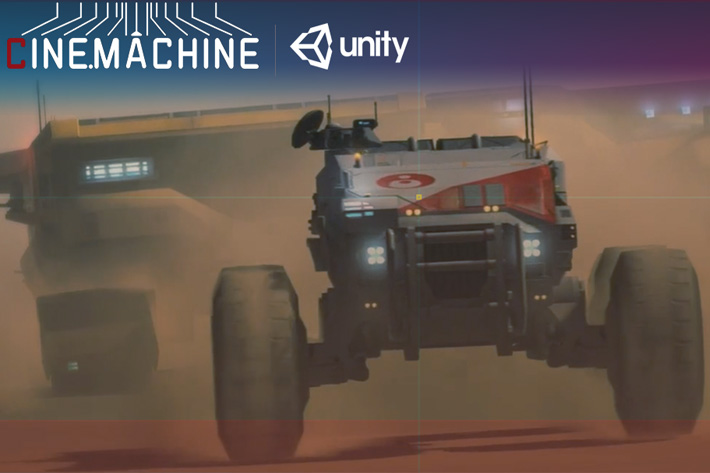 Timeline and Cinemachine, which allow artists to create cinematic content and gameplay sequences without the need for coding, are key tools of the new version of Unity, demoed at Siggraph 2017.

Unity initial aim was to democratize game development, a logical goal when the game engine was launched, in 2005, but more recently the goal has expanded, and Unity aims, apparently to democratize cinematography as well. The introduction of the most recent version of Unity, Unity 2017.1, launched earlier in the month, confirms the suggestions made in January this year, when Unity announced the introduction of a powerful new addition to Unity’s creation tools: Cinemachine Base Rig.

At the same time the company announced that creator Adam Myhill was joining Unity,  bringing with him nearly 20 years of experience creating camera systems in numerous game engines and with some of the biggest studios in the business. Adam Myhill is the Head of Cinematics and the person behind the plans to improve the cinematic creation experience. Something that takes a step forward with this new version of the program, and has been demoed at Siggraph 2017.

Unity’s presence at Siggraph made several workshops and courses available to the participants, centered on the new features available on Unity 2017.1. Topics covered included Photogrammetry and 2D Tilemapper, but what interests us mostly here at ProVideo Coalition are those aspects related to the art of storytelling through animated images. Multiple events organized by Unity at Siggraph 2017 related to themes as Real-time Rendering and Cinematic Storytelling, 360 Video, Holographic Cinematic Rendering, Storytelling and Cinematography, Mixed Reality, VR,  besides workshops specific to the two new tools included, Timeline and Cinemachine, which empower artists to create more content in less time.

Right at the start of Siggraph, Adam Myhill, Head of Cinematics at Unity said that “Unity is not only the world’s most popular gaming engine, it’s also the world’s most powerful creation engine. Amongst the new features in Unity 2017.1 are powerful professional grade tools that are accessible to creators of all types and sizes,”  and added “at Siggraph we’ll be demonstrating how these tools allow for the big teams to be more productive and for the little teams to punch above their weight. Best of all – this flexibility allows teams the license to delay creative decisions until later in the process without taking too many risks. This new workflow will improve the quality of those creations, and give creatives the room they need to experiment — we feel that it’s going to be a game changer for the artist community.”

Cinemachine,  created by Adam Myhill, is the result of over a decade of building gameplay and cinematic cameras. It now puts industry-leading camera behaviors in everyone’s hands, and ushers in, according to Unity, “the era of procedural cinematography.”  It’s a suite of smart cameras that dynamically trigger the best shots at the best time based on scene composition and interaction. This eliminates countless hours of hand animation, camera programming, and revision.

Cinematography is a lifelong passion for Adam, from calibrating huge photographic enlargers with tiny screwdrivers as a child before starting his own business doing time-lapse aerial photography at the age of 17. According to a note published by Unity, Adam “designed procedural camera systems for games and has worked as a Director of Photography in feature film, documentaries and music videos. It was via work with Blackbird Interactive that Adam discovered a new passion: developing in Unity”. That’s how he joined the company and became Head of Cinematics.

Thinking of Cinemachine as a tool for game creators is to not understand its potential. The goal and power of Cinemachine is to empower developers, designers, camera artists and cutscene creators with smart camera tools so they can spend their time exploring and creating instead of  wrestling with camera code. It unleashes artists and provides solutions to the impossible – you can track and compose objects with variable performances.  You can create a bunch of cutscenes and then change animations around and the cameras will adapt and figure out how to best shoot those scenes automatically. A very large amount of time and effort has gone into getting the cameras to behave and ‘feel’ right, with convincing weight and smooth transitions.

From a cinematographic point of view, Cinemachine is a dream. It allows users to control sequences like a movie director with advanced camera tools, including real-world camera settings. You can compose shots with a focus on art direction, not implementation details. Give Cinemachine smart cameras simple directions, like following the head of the character, and if the animation changes, your shot will update automatically and continue to work correctly. You can also create film-like dolly track footage and have your camera smoothly move through your worlds, ideal for cinematic sequences or game cameras where you want the camera to follow the subject down a set of rails. These are just some of the tools available inside Unity 2017.1.

Timeline is the second powerful element present in this release. Timeline is a new visual tool that allows you to create cinematic content (like the Adam short film above). You can use it to create cutscenes, create gameplay sequences, and much more, by orchestrating your game objects, animations, sounds and scenes. With Timeline, you can focus on storytelling and cinematics, not coding.

Timeline’s track-based sequencing tool applies a “drag and drop” approach to choreographing animations, sounds, events, videos, and more, for faster creation of beautiful cutscenes and procedural content. Timeline has features for animation and audio, auto-keying and a multi-track interface with the ability to lock and mute tracks. Timeline is extensible via the Playable API and offers you the ability to create your own tracks to drive whatever systems you have in your game. You can make a Timeline clip to represent practically anything–and have those clips repeat, scale and blend together, making the most of the Timeline interface.

Located at South Hall Booth #417 in the Los Angeles Convention Center, Unity will be holding demos of the powerful new artist tools, courses on advancements in real-time rendering, and workshops on cinematics and storytelling until the end of today.  Attendees can also stop by the booth to receive a 10% off coupon to a Unity subscription. Additionally, several Made with Unity titles including the award-winning “Zero Days VR” will be on display during Siggraph 2017.