Picking the right monitoring interface for your editing/grading system is a very critical decision. Learn the important factors to help you make that decision in this article. 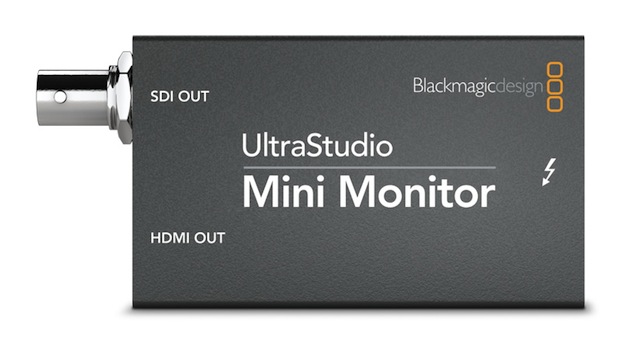 Earlier this week, I published UltraStudio Mini Monitor: competition to T-TAP? together with a detailed comparison chart. Among many other things, that chart clarified that T-TAP does not work with the industry’s most revered grading program (DaVinci Resolve), and that UltraStudio Mini Monitor does. At US$145, UltraStudio Mini Monitor certainly won’t win any awards for Brevity of a product name, but it will certainly win one for least expensive interface for a full-raster/proper framerate interface to see your grading (or editing) results in realtime on an HD monitor or HDTV set. In fact, even if you own a DreamColor monitor and want to make it work with DaVinci Resolve as a program monitor, the sum of US$145 + US$495 for the “Band-Aid” = US$640 which still represents the least costly connection, even with the irony of the “Band-Aid” now costing more than the “wound”. But that brings us to my title question: Should you use it for serious grading?

Clarification about compatibility with DaVinci Resolve

Just in case any of our readers isn’t aware: The reason that the T-TAP doesn’t work with DaVinci Resolve is the same reason that no other interface from AJA, Matrox, or MOTU works with DaVinci Resolve. It is a business decision from Blackmagic (which now owns DaVinci Resolve), similar to the business decisions that Avid made (in the past). There was a time when Avid video software worked only with Avid-branded interfaces. Later, Avid opened up and today Avid video software like Media Composer 6 works with interfaces from AJA, Blackmagic, Matrox, and MOTU. That is what the two situations have in common. What was quite different was the fact that in the era when Avid restricted hardware compatibility to its own interfaces, those Avid interfaces were often much more expensive than comparable hardware from any of the other mentioned hardware manufacturers. Now the opposite is true with Blackmagic, since their hardware interfaces tend to have lower prices than similar interfaces from AJA, Matrox, or MOTU.

The primary colors in color video are RGB, or Red, Green, and Blue. However, a long time ago, video engineers discovered that given a situation of limited bandwidth, it is often more efficient to handle the video in a component version of RGB. This is because the human eye is more sensitive to the luminance portion of the video than the chroma portion. Component video assigns more of the bandwidth to the luminance, which is comprised more of the Green channel than either of the others. For example, at least with NTSC, the luminance is derived 59% from the Green channel, 30% from the Red channel, and 11% from the Blue channel. Over the years, there have been many different ways of expressing component video, including:

Sometimes the terms are associated more with one context than with another. In the component analog days, there were even fights among the standards in terms of the chroma levels (the EBU N10 level, the SMPTE level, and the Sony Betacam USA level, etc.) which sometimes caused mismatches when interconnecting analog equipment. I remember having to re-calibrate component analog video mixers (“switchers”) to work with a different standard… and having to prove to Leader Instruments that in the PAL world, Sony had accepted the EBU N10 level, in order to prevent Leader from forcing PAL component vectorscope users to display the words “MII” just to measure the proper level for PAL Betacam SP. It was very different in the NTSC world, where the Sony USA chroma levels won over in popularity over the SMPTE levels. But that’s all nostalgia now…

Most video códecs used in cameras and even in high end external recorders record video with component (YUV) 4:2:2 as opposed to RGB. One exception that comes to mind is Sony’s HDCAM SR in RGB mode. Another is Alexa, which can record directly to ProRes4444. More recent RAW digital cinema cameras from several different manufacturers -on the other hand- record a Bayer file in one of several formats. It cannot be read directly, and must be debayered or demosaicked.

Color space used in grading programs and in DaVinci Resolve

Most grading programs I have seen handle everything internally in an RGB color space. However, DaVinci Resolve fortunately allows you to monitor something different if you want or need to (i.e. YUV 4:2:2), and that’s how it must work with the UltraStudio Mini Monitor. In fact, DaVinci Resolve allows you to output to a lower spatial resolution than the files you are grading. For example, if you’re working with 2K files for 2K output, but you’re grading using a 1080p HD monitor, you can select the appropriate HD standard for that monitor without changing the Timeline Resolution settings in DaVinci Resolve. The question is: would you want to do that? Obviously, if your monitor has a maximum of 1080p resolution and you need to get the job done, you would need to do it. This is similar to the situation that existed for some video editors who needed to edit HD projects but hadn’t yet acquired an HD monitor. In fact, some of them continued to monitor on a CRT (Cathode Ray Tube) SD monitor before LCDs and Plasmas were the majority used by TV viewers, and before there were CRT-class LCD and OLED monitors. 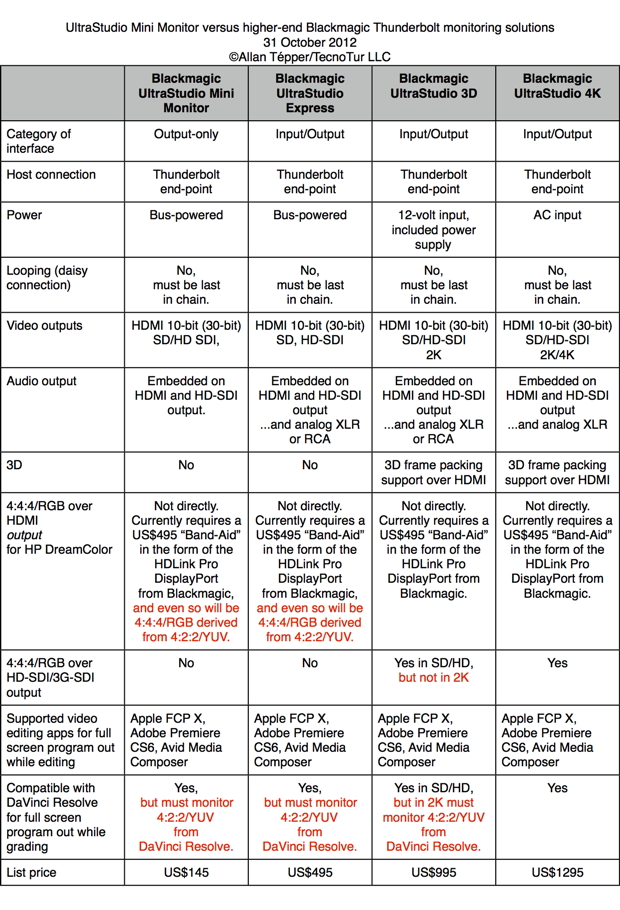 So what’s the bottom line?

There are at least US$850 difference between the UltraStudio Mini Monitor and the least costly interface that can output 4:4:4/RGB to a monitor, so it’s an important decision. Answer these questions for yourself before continuing:

If you are sure you’ll always be delivering a final product that is less than 4:4:4 (i.e. 4:2:2 or 4:2:0), by monitoring the “strangled” 4:2:2 converted version [assuming that your monitor is properly calibrated to your desired format (i.e 709) and everything in DaVinci Resolve and your interface are properly set], then you are seeing it on your monitor in a similar way to the way your final viewers will. It would still be much better to minimize conversions between your monitor’s input and what’s happening inside of DaVinci Resolve, but it isn’t obligatory. Also, ask yourself if grading is your main concentration or if you are just dabbling with it for now.
If you must deliver a final product in 4:4:4/RGB, you really should be sending 4:4:4/RGB to your monitor to see it as accurately as possible.