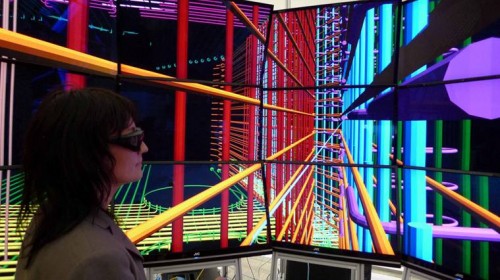 JVC Professional Products, a division of JVC U.S.A., announced today that the California Institute for Telecommunications and Information Technology (Calit2) is using JVC GD-463D10U 46-inch 3D HD LCD monitors as part of its next immersive visualization system. Short for new micropolarized panel-based cave automatic virtual environment, NexCAVE was prototyped in June at the University of California, San Diego, and the first full-scale version was recently installed at King Abdullah University of Science and Technology (KAUST) in Saudi Arabia.

Calit2 research scientist Tom DeFanti, along with partner Dan Sandin, started designing visualization systems more than 35 years ago when they co-founded the Electronic Visualization Laboratory at the University of Illinois at Chicago. DeFanti said they conceived of the original CAVE system using projectors to reconstruct a 3D surround environment in 1991.

Early projector-based VR systems were generally limited by two major factors. Resolution was fair at best, due to limitations in computer processing power and projector technology. Plus, these systems required a very large dedicated space – front projectors were not practical because users could block the projected images, so rear projectors, which need sufficient throw distance, were needed.

StarCAVE, a five-wall plus floor VR room that supports 3D imagery, was constructed by the UC San Diego division of Calit2 last year. With 34 JVC DLA-HD2KU projectors, the third-generation system improved resolution and provided a 360-degree immersive environment. However, DeFanti said it still requires a major architectural space commitment and is not portable.

In contrast, the new NexCAVE design uses JVC 3D monitors, which are less than two inches deep. The basic setup includes 10 panels, a 3×3 matrix in a semi-circle ring. The entire top row is tilted down slightly and the bottom row is tilted up slightly. An additional monitor below the center column is angled up and positioned at about knee height.

With its modular design, the system can be dismantled and packed for easy transport between venues, plus it can be designed in various configurations. The LCD panel-based system is also a fraction of the cost to construct when compared to projector-based systems. With no projectors, the NexCAVE system also practically eliminates time-consuming color balance and alignment adjustments that are required in older systems every time a projector lamp needs to be replaced.

Beyond lower costs and fewer technical issues, the JVC monitors provide excellent images. “The quality is just gorgeous,” said DeFanti. “The stereo separations are quite good. It has great blacks and very vibrant colors. Since these HDTVs are very bright, 3D data in motion can be viewed in a very bright environment, even with the lights on in the room. Lights-on is something that just wasn’t possible with the StarCAVE.”

NexCAVE is powered by COVISE software, which was developed at the University of Stuttgart and adapted by UC San Diego. The software synchronizes and controls the source material and GD-463D10U displays, which do not require special hardware to play 3D images (almost any source that can send an HDMI signal can be used). According to DeFanti, the KAUST NexCAVE also features a 5.1 surround sound system with custom software designed by Calit2’s Sonic Arts team at UC San Diego, and its 10 Gbps Internet connection allows researchers to collaborate with colleagues worldwide.

ABOUT CALIT2
The California Institute for Telecommunications and Information Technology (Calit2) is a partnership between UC San Diego and UC Irvine established in 2000 with facilities on both campuses that house nearly 1,000 researchers. They are organized around more than 50 interdisciplinary research projects on the future of telecommunications and information technology and how these technologies will transform a range of applications important to the economy and citizens’ quality of life. www.calit2.net.

ABOUT JVC U.S.A.
Headquartered in Wayne, New Jersey, JVC U.S.A. is a division of JVC Americas Corp., a wholly-owned subsidiary of Victor Company of Japan Ltd. JVC distributes a complete line of video and audio equipment for the consumer and professional markets. For further product information, visit JVC’s Web site at http://pro.jvc.com or call (800)526-5308.