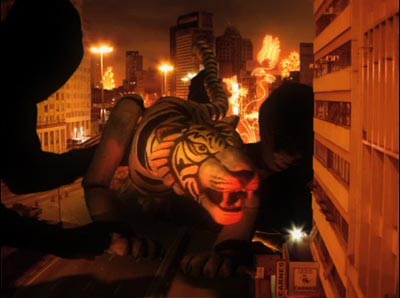 A frame from the short film “Tyger” by Guilherme Marcondes.

Links to a pair of lovely (for lack of a better term) “music videos” crossed my desk this week that I thought would be nice to share as you go into your weekend.

If you’re looking for something invigorating, then first view Tyger by Guilherme Marcondes. It contains a brilliant combination of physical animation (the tiger itself) along with 3D, a flat cartoon look, and glowing graphical elements. I had to view it twice: the first time, I was delighting in the sheer craft involved; the second time I got the story. I thought it was a particularly bold move to include the puppet handlers in the action, as it further broke down the walls of expectation; Trish would have liked to have seen a 3D tiger so that the surprise of seeing the handlers wouldn’t take away from enjoying the story. Guilherme has previously created videos for MTV, Microsoft, Nickelodeon, Cartoon Network and Animal Planet; click here to read an interview with him by Computer Arts magazine.

To calm down after the excitement of watching a tiger stalk a city, you might want to next view the soothing abstract video drift by Richard Lainhart. Some of you may know Richard for the period he and Brian Maffitt (of Total Training) hosted the New York After Effects user group, but he is equally well known in the electronic music universe. This movie combines Richard’s After Effects skills with a soundtrack improvised on a lap steel guitar, processed the Kyma sound design workstation.

drift from Richard Lainhart on Vimeo.

drift by Richard Lainhart. Click the four-way-arrow widget in the lower right corner to make the video play full screen; best with headphones or a speaker system that can lift the music above the ambient noise in your room.

Richard tells me he created several layers of particle animations using the freeware AEFlame plug-in. The patterns were color-enhanced and blended together using modes, and then swept into arcs using the CC Radial Blur effect. (I’m greatly simplifying the process here.) In the end, he estimates drift represents about 400 hours of rendering on a dual-proc G5.

Enjoy, and please feel free to pass along other links to interesting eye candy for the rest of us to watch.

(Props to Jim Curtis for posting the link to Tyger on the Media-Motion After Effects list.)