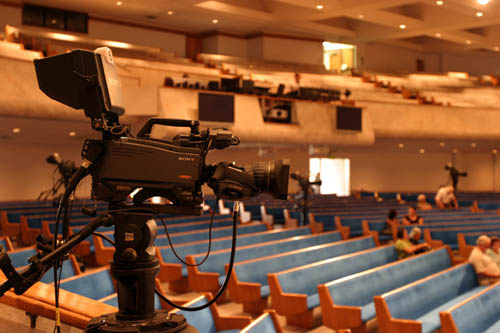 Turning Point in Lakeside, Calif., which produces religious programs that are seen across the country on a variety of networks, upgraded to HD when it rolled out a new 45-foot expanding side mobile production unit in January. An integral component of the HD upgrade is a complement of new Fujinon lenses, which are used for coverage of church services at Shadow Mountain Community Church in El Cajon, Calif., Turning Point events across the United States, and ENG work.

As the broadcast ministry of Dr. David Jeremiah at Shadow Mountain Community Church, Turning Point (DavidJeremiah.org) captures the services, music, and sermon on Sundays at the church. Jeff Larson, Turning Point’s director of television and radio production, said the new production truck travels between their post production facilities in Lakeside and the church every week. The truck is used exclusively for Turning Point and is not leased out for other productions at this time.

“We produce one-hour and half-hour formatted shows,” Larson added. “We don’t turn those around in a week or two weeks like some other ministries. We wait until we have an entire series done – that’s 10 to 12 messages. Then we’ll produce study materials to go along with them such as study guides, books, and CD sets. This is all part of our mission and strategy to deliver the unchanging Word of God to an ever-changing world. Our upgrade to HD should help keep Turning Point technologically relevant in the highly competitive space that is television.”

According to Larson, the new lenses offer faster zoom speeds than their previous lenses. “It allows the cameramen to get in, get the shot, get their focus checked, and get back out,” said Larson. “It is significantly faster than what we were able to do before. That’s one of the benefits of the upgrade.”

Larson is also impressed with the image quality from the new Fujinon HD lenses, which have less aberration in the outer edges of the picture. “We’ve been a Fujinon house as for long as I can remember,” he added. “We’ve gotten good results over the years. When we need it, the service we get from Fujinon is quite good.”

Fujinon is a major manufacturer and distributor of optics and lens assemblies for the broadcast, digital cinema, and industrial markets. The company’s line of television zoom lenses are used in virtually every segment of the broadcast industry, including electronic newsgathering, studio and field production, and high definition television. For more information about Fujinon broadcast and communications products, call 973-633-5600 or visit our web site at www.fujinon.com.