Well, rewrappered QTs – as native as P2 is… 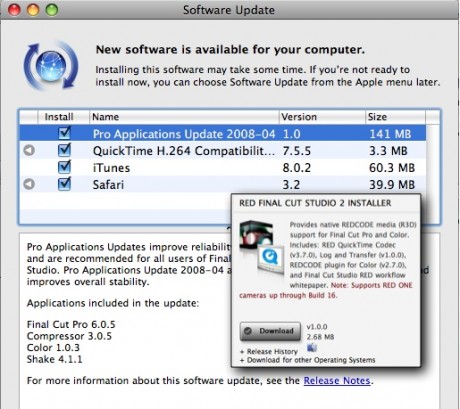 Apple and Red have teamed up to support native (OK, rewrapped QTs, akin to how P2 is handled) .R3D support in Final Cut Pro 6.0.5 and Color 1.0.3. Red has a plugin to work with those new versions, including access to the 12 bit RGB data within Color…even letting you manipulate exposure, white balance, etc. on the native R3Ds in a 32 bit floating point space. Keep reading for either:

a.) to understand WTH all that means, or

b.) all the gory details if you do

OK, so we’ve got 3 parts from two vendors.

Oh, but only if you have an Intel Mac – otherwise all this Red stuff won’t do you any good.

While that beefy download is pulling down, go over to Red’s support page and pull down Red Final Cut Studio 2 Installer (and while you’re at it, Red Alert 3.6.0, now support DNx codecs better).

While you’re STILL waiting for the Apple downloads to conclude, open up that folder downloaded from Red and open up the Red FCS Whitepaper.pdf – it is 24 pages of workflow goodness, with lots of extras thrown in. If I were going to write a crash ‘n burn starter field ‘n post workflow guide, this would be about 80% of what I’d cover on the digital side. Yeah – it is that good. READ. LEARN. DO. ’nuff said.

So here’s the deal on what you get:

-we’ve been able to import and transcode to ProRes for a while. That is still here, (along with ProResHQ), but what we have now is limited pseudo-native support – you can’t just drop an R3D onto the timeline, it has to go through the Log & Transfer window – this is VERY similar to how P2 is handled – it is the same “stuff,” just in a QuickTime wrapper. When you set your prefs in Log and Transfer to Native, when the progress bar advances (MUCH faster than the transcoding options), what you’re witnessing is pretty much just a copy – the R3D data is being written into a QuickTime wrapper into the Capture Scratch folder.

So basically, 4K 2:1 comes in at half res, you half to cut (if native) at half res, you have to render half res. I don’t mind DELIVERING half res, but personally, quality nut that I am, I’d prefer to have 2K rendered and sampled down from an oversampled 4K source.

The bigger deal is in Color – you can manipulate the source R3D’s interpretive metadata. This means you are manipulating from the full 12 bit (that’s 4096 shadings of R/G/B each) in Color, which can be set to work in up to 32 bit floating point precision. This means you can tweak as much source data as possible, in a very precise color space, so your coloring decisions lose as little quality as possible. This is outstanding. You access the Red stuff in the Primary Color room – allowing for a pre-grade to be ready to tweak later. My favorite advantage of this access to the RAW data to do things like recover highlight detail you’d never get access to if you just transcoded to ProRes (even HQ, or even DPXs for that matter) from the get-go without tweaking.

And don’t forget the new setting possible in the latest QT codec, where you can set the quality of the 1/2 res decode for faster or better performance…

OK, it is late and I want to get to bed, but rest assured I’ll be banging on this in the near future. They were showing off this stuff over the last couple of NABs, so I’m glad it is finally working and released…18 months or so later. I’m curious if that new ATI card, what is it, the 4860? The one with Mac drivers? Does Color working with Red benefit from that?

Go read the PDF in the Red download, LOTS more good info in there.

But what we CAN’T do yet that I’d like to (or at least isn’t officially supported):
-import 4K 16:9, or any other 16:9 for that matter (maybe works, maybe doesn’t, not tested by Red or me)
-import the “double 1080p” res for 1080p deliverable when using half res
-import anything over 24p (I’d LOVE to see 3K60p pulled down to 720p60)
-do any of this on a non-Intel Mac (quitcher grousin’, they always said would be this way)
-work with oversampled media (pull 2K or 1080p from the 4K but have Oversampled Goodness…they way higher end film scans are done)
-can’t work in a native Redcode timeline – since RAW, Redcode is forever read only…until the mythical Redcode RGB might spring forth from Graeme’s forehead, fully formed (Project Athena, anyone?)

…but all this is excellent progress – I’d just like to see it happening faster.

UPDATE – forgot to add that Compressor recognizes these new wrappered QT files, as would, I presume, Final Cut Server (see this post). This opens up some interesting workflow options to work around some of the above mentioned limitations. I’ve been hip-deep with Final Cut Server, which is oh-so-painfully 1.0, but can do some pretty awesome stuff. Got a complex project workflow to deal with? I’ve been consulting lots on that kind of thing recently. But that’s another blog post…