Sony’s Cine-EI mode is both a blessing and a curse. Here’s how to work to its strengths and around its issues using two free software packages… 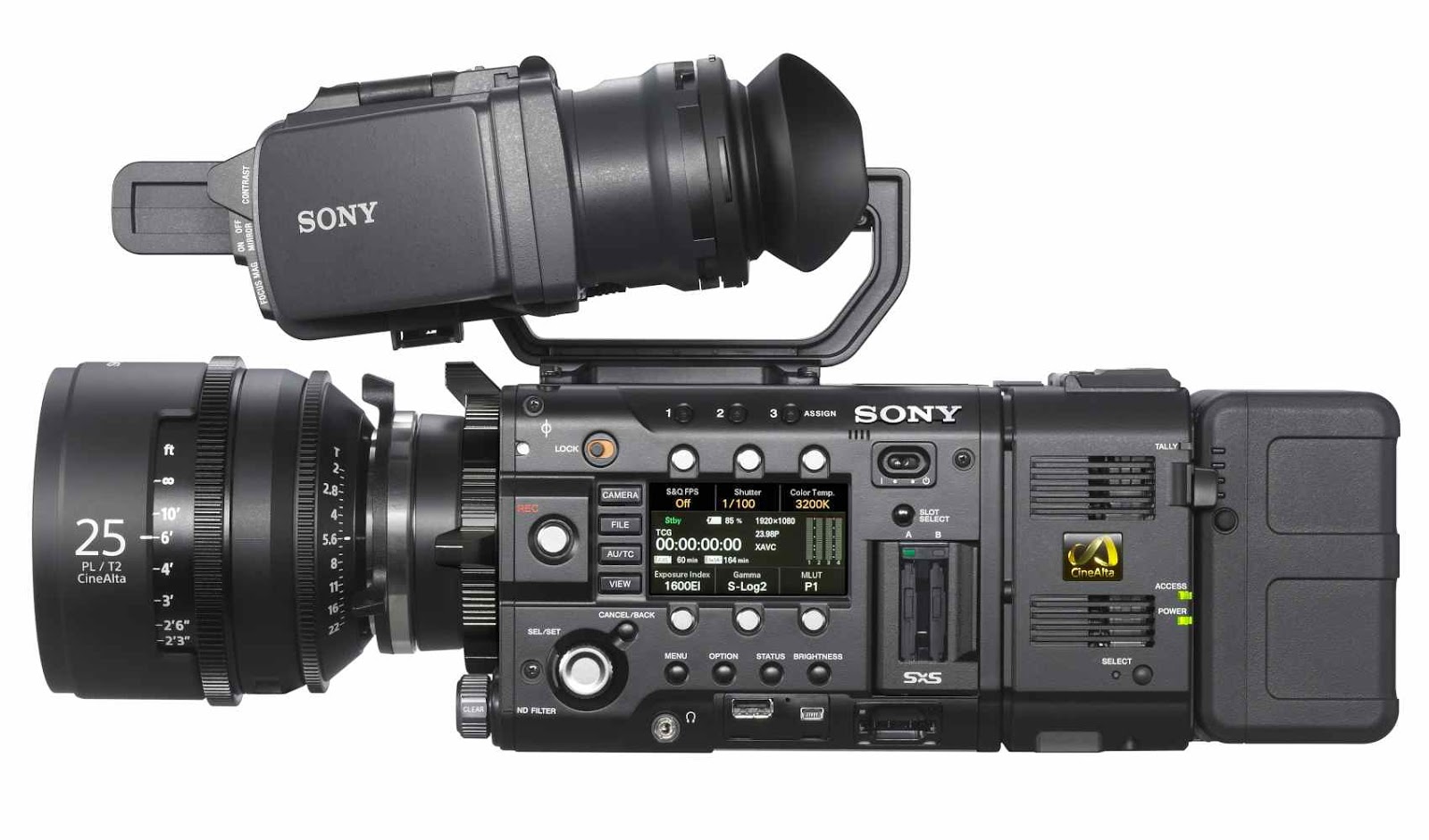 I can’t stand the traditional “Sony look.” Hypergammas and Sony’s Custom-mode Rec 709 color matrices just don’t do it for me. When Cine-EI mode became an option in the FS7/F5/F55 cameras I was pleasantly surprised, and when they released the LC709 Type A LUT I was ecstatic. Finally I could use Sony cameras and not be repulsed by bright, saturated colors, orange flesh tones and abrupt roll-off in electronic-looking highlights.

Later I discovered that this was not a free ride. There are compromises involved, and some of these revolve around the fact that these three cameras operate in huge color spaces. More on that later. First up: noise.

I don’t trust manufacturer ISO ratings. They’re always a bit optimistic for my taste. My rule of thumb is to divide the recommended base ISO by two, particularly when shooting visual effects projects, although there are better ways to determine a camera’s acceptable ISO. (That’s another article.)

I rate Sony’s F55 at ISO 640 instead of 1250. The F5 and FS7 I rate at ISO 1000 instead of 2000. I only shoot with those cameras in Cine-EI mode, typically with the LC709 Type A LUT engaged, and if I bake in a look then there’s no question that post will base their grade on what I’ve given them as they can only do minor tweaks. If I provide post with S-Log3 files, however, I run into a problem: regardless of what ISO I’ve set on the camera, the log image is always recorded at the camera’s base ISO. If I’ve rated a camera a stop slower then my images will look a stop brighter when the standard LC709 Type A LUT is applied in post. There’s no metadata that says, “Move middle gray up a stop, will you please?”

My workaround is to generate post LUTs using Sony Raw Viewer. I start with a random clip that I captured with an FS7 at its native ISO and open it up in the viewer. There’s an exposure slider at the top right of the interface that’s calibrated in f/stops, and selecting a clip causes that slider to default to the ISO it finds in the clip’s metadata. If that clip was rated at ISO 1000 then it will appear to be one stop too bright. I drag the exposure slider left until the window at the far right says “-1”, and then I export a LUT. When applied to that clip in post, that LUT will compensate for my ISO change and make the image look the way I want it to. 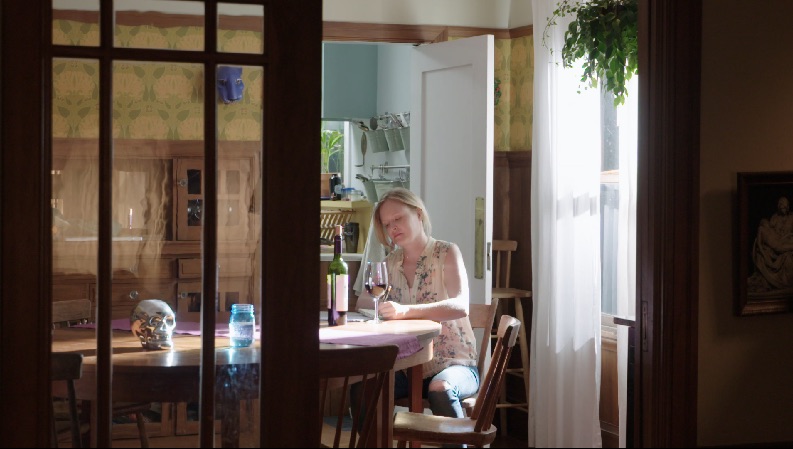 This is an ISO 100 shot brought into Sony Raw Viewer. One of this program’s quirks is that the Exposure slider will always show the ISO at which the clip was shot, but the thumbnail shows the clip at the camera’s native ISO. In this case the Exposure slider says “1000” but the clip appears overexposed by one stop because Sony Raw Viewer is displaying it at ISO 2000, which is what Sony considers to be the FS7’s optimal rating.

Pulling the slider to the left, until the exposure window at the right side says “-1”, makes the image look the way I shot it: 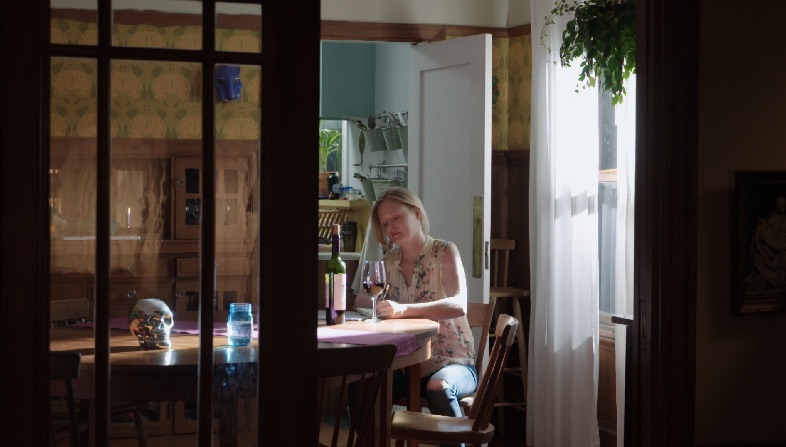 The thing to remember is that Raw Viewer will show you the ISO metadata but won’t actually apply that ISO to the clip. It will always show you, and assume you shot at, the camera’s native ISO, regardless of what metadata it detects and displays. It’s up to you to make the correction by adjusting the exposure control, and it’s best to look only at the window to the right of the slider and set the exposure compensation in f/stops. Don’t think of where the ISO slider itself lands, as that won’t make any sense.

If this tool is so wonky, why use it? Because it’s not that wonky. It’s one of the best designed OEM camera apps I’ve seen. It allows me to generate LUTs that perfectly compensates for exposures at non-native ISOs. How do I create a LUT in Resolve that exactly compensates for a one stop ISO change? It’s not easy. In Sony Raw Viewer I simply set exposure compensation in precise 1/3 stop increments. There’s zero guessing.

There’s one big caveat, though: I have to generate a new ISO LUT for each of Sony’s white balance presets (3200K, 4300K and 5500K). As a test I exported all three presets at the same ISO and took a peak inside the resulting .cube files: all three LUTs were different, which tells me that white balance definitely makes a difference when generating a LUT. This makes sense, as Sony states the reason they don’t offer white balancing options in Cine-EI mode is because the camera’s color gamut is so immense, and the color science math is so complex, that they have to generate a new LUT for each new white point (and presumably for each ISO) and that has to be stored in the camera’s memory. There’s only so much space to do that, and only so much time a company is willing to spend calculating such things. Adding 100K steps between 4300K and 5500K, for example, would require 27 LUTs at one ISO setting alone.

Custom mode—the alternative to Cine-EI—appears to use a simple color matrix to bend the camera’s color space into Rec 709. Matrices are simple linear formulas and don’t allow for subtle manipulation of hues based on saturation. For example, a color matrix can’t prevent increases in color saturation when luma passes 18% gray, the way Alexa does. A LUT does allow for this kind of color manipulation, but if the color space is large enough the math becomes quite complex and changes for every white point. One look at SGamut/SGamut3’s color space shows that it’s HUGE. It’s also rotated in relation to Rec 709 and P3, which makes for additional math. 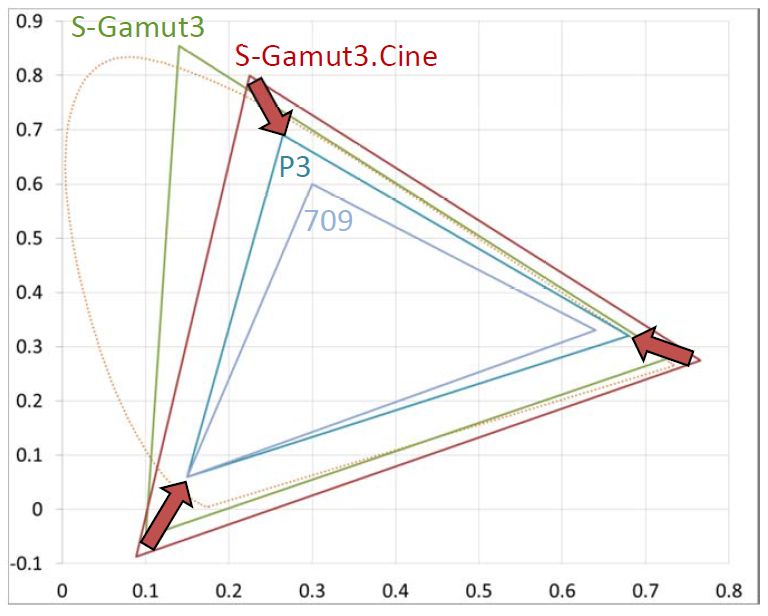 (SGamut3.cine is a mathematical tweak that forces SGamut3’s primaries to line up with P3 and Rec 709 primaries. This allows colorists to use lift/gamma/gain controls alone to grade, instead of having to work through a LUT or adjust for SGamut3’s rotated hues manually—which can be a bit tedious.)

Given all the math involved, I’m not sure why DaVinci Resolve only offers one LC709 Type A LUT option that appears to work with all white balance presets. Maybe it’s selecting one of three LUTs based on white balance metadata but hiding that process from us? I have no idea.

I’ve toyed with the idea of generating user LUTs that compensate for color shifts, such as those seen in fluorescents, as that’s impossible to do in camera when working in Cine-EI mode. Sony Raw Viewer offers a green/magenta slider but it isn’t calibrated in any way that reflects reality. I was considering a long period of experimentation, where I’d generate numerous LUTs with varying degrees of minus green and test them against common fluorescent sources, until someone brought Ben London’s LutCalc to my attention. This web app, which is also available as a plugin for several browsers and as a standalone javascript app, allows one to create a customized LUT by manipulating a number of easy-to-understand parameters.

For example, to create a LUT that corrects for cool white fluorescent light at ISO 1000, I’d select the following options: 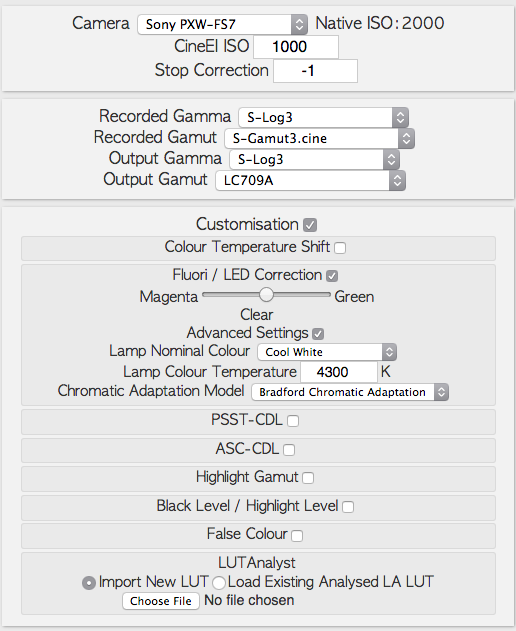 I’ve looked at using this tool to modify several of Sony’s preset LUTs. The LC709 Type A LUT attempts to emulate the look of an Arri Alexa (it doesn’t do this perfectly but it’s much better than the stock Sony “look”) and, like Alexa’s Rec 709 look, blacks are boosted to 4%. If you’re baking in a look and you don’t like the raised black level, it appears possible to push it down to a lower value, like 1% or 0%. Go into Customization > Black Level/Highlight Level > Black Level and change that value to one you prefer. Watch the slope of the LUT in Stop/IRE view, though, as you’ll notice the mid-tone slope gets a lot steeper and picks up some contrast. (This is not a bad thing.)

It’s interesting that it’s almost impossible to tweak a predefined LUT with finesse, particularly when it comes to gamma and white/black points. Changing nearly any of its parameters affects all the others.

I haven’t experimented enough with this app to know how accurate and reliable it is, but I plan on generating a library of warm white and cool white fluorescent LUTs at different ISOs and see how they work in the field. I refuse to shoot with the FS7/F5/F55 in any mode other than Cine-EI, and this seems like it could be a great way to keep my clients from panicking when I’m using a LUT with a preset white balance under unfavorable lighting conditions. 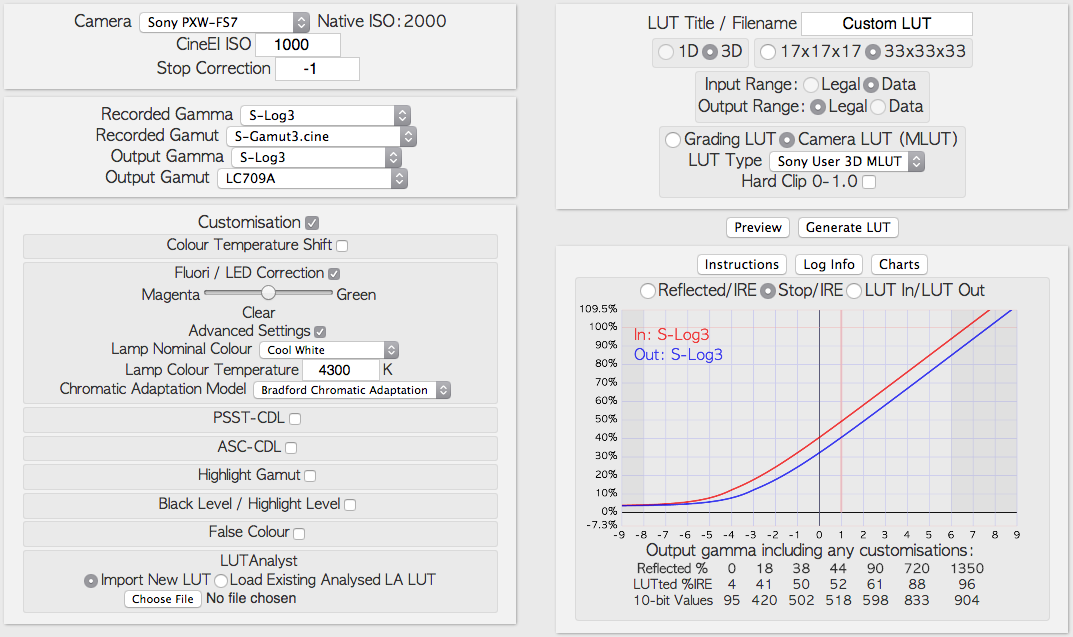 This is only one of many helpful graphs that help us to visualize the effects of our corrections. In this case the faint red vertical line shows where middle gray falls when I change the ISO from native to -1 (2000 to 1000).

I’ve been told that Sony Raw Viewer is nearing its end of life, which is unfortunate as it has turned out to be a remarkably useful little app. I don’t know if its replacement, Sony Catalyst, will have this same LUT-generating functionality as I’ve not been able to review it yet.

Sony makes products that are 90% great, but that last 10% reflects that they are, first and foremost, a broadcast camera company and not a cinema camera company. Still, when they decide to do something they do it quickly and well, and I hope to see great improvements in workflows and functionality as they come to understand the ways and aesthetics of film-style production.

Disclosure: I have worked as a paid consultant to Sony. I have no connection to LutCalc, other than that I hope to use it quite a lot in the near future.