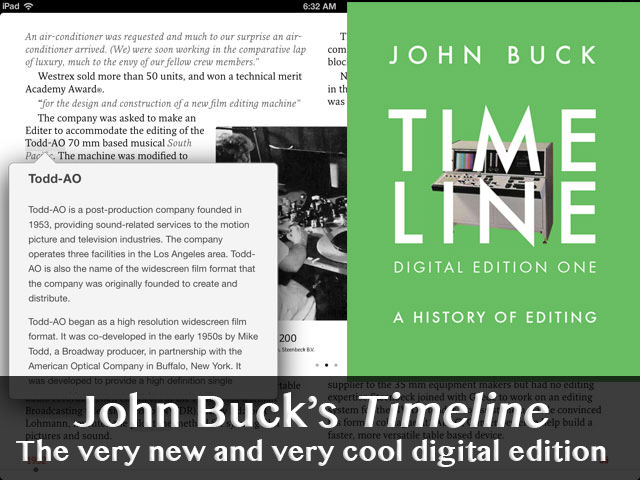 Timeline: A History of Editing is an amazingly detailed book about just what the subtitle says, a history of editing. Written by John Buck, Timeline is something we’ve spoken about before but it recently got even better with the release of Timeline: Digital Edition One. This iPad specific book is updated for iBooks on the iPad with “photographs, video material, original brochures and animated patents, as well as audio clips and exclusive interviews that document the lives of editors and the craft of editing from the very beginning.”

This new digital edition comes from the first volume of the book and covers the years from 1888 to 1971. That doesn’t include the digital era we’re currently living in and the NLEs we’re all familiar with but it’s full is fascinating stuff about the origins of the craft of editing as well as many of the tools. It’s very thorough and a quite fascinating read. 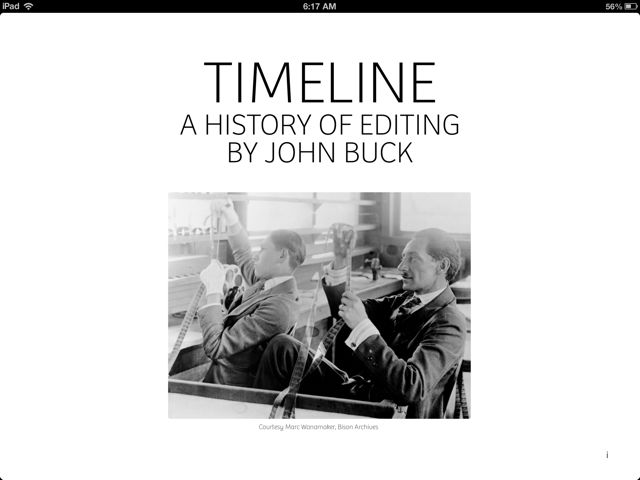 The new digital version features tons of historical photographs that all editors should enjoy.

It’s amazing that someone would so exhaustively research and write such a niche book but John Buck has done it. If you’re curious … I asked John a few questions about this version of the book and writing Timeline in general.

What was the inspiration for writing this rather specialized book?

I had started researching the background to video editing in my spare time, in between editorial assignments, to, well settle an argument. Then two pioneers in the field, who had helped me endlessly with emails and photographs and memorabilia, sadly passed away. I realized that the stories of how we came to have such amazing editing tools would eventually disappear if somebody didn’t record them. By a twist of fate I guess, that somebody was me. The book is in part dedicated to editor Art Schneider and engineer Jack Calaway for that reason.

The process of writing the text only Timeline took six years on and off. In between transcribing interviews and collecting the facts, and editing television commercials, my wife and I had two children and moved from the leafy suburbs of Sydney to the megapolis that is Beijing, China. After the text versions shipped, I took a short breather and then spent a year creating the digital version. 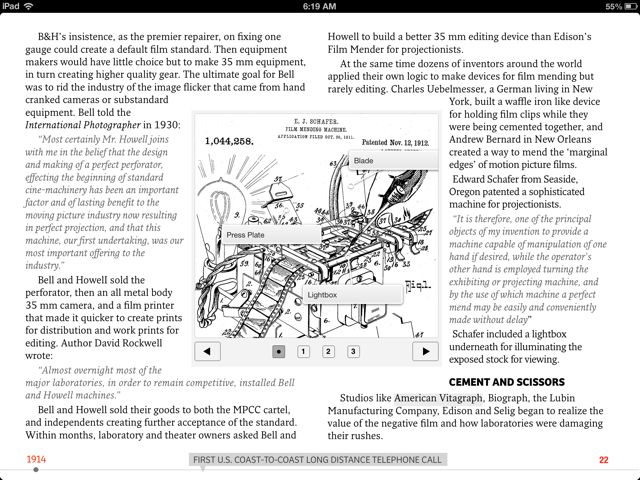 Images in the middle of the page are often enhanced with details. 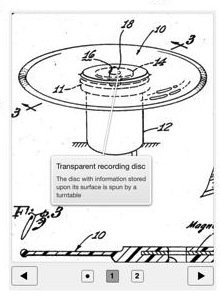 Touch into the images to get more information about the image at hand.

Did you get good cooperation from the companies involved or did you go mainly straight to the people?

For the digital version of Timeline, I was lucky enough to get great support from a wide range of people and companies. Private collectors like Marc Wanamaker to European institutions like the Austrian Museum to a re-born KEM in Hamburg where the new CEO made finding images, and ensuring KEM is remembered, a company priority. So the support was amazing, and unreserved.

How successful have these very specialized books been?

I don’t want to gauge the success for Timeline in purely financial terms, because having spent 7 years in total it’s never going to break even! But sales are growing and several film schools have expressed an interest in making the new version of Timeline a part of their syllabus. I think the book sales will grow, in the ‘long-tail’ way that Chris Anderson astutely phrased, and that’s why I wanted a digital version that could be constantly improved.

For me success is an email. Once a fortnight or thereabouts I get an email from a complete stranger who has found the book. They tell me that they were involved in some way with the development of editing and they are writing to say ‘thank you’. 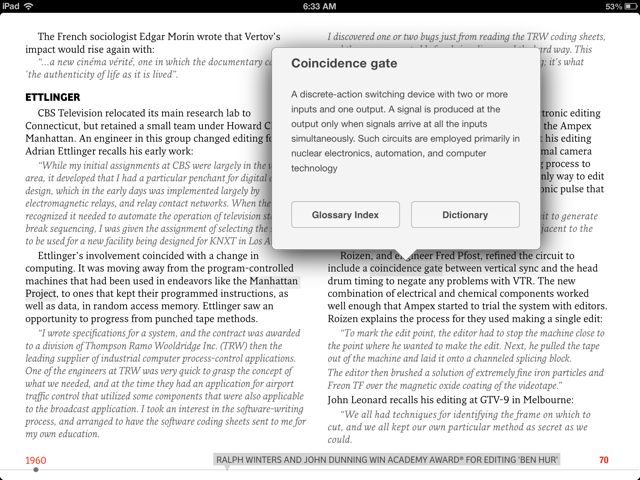 There's tons of definitions accessible via pop-ups throughout the digital edition.

Did you design the original book yourself? Using what design tools?

After I released the first books as ePub files to Amazon, Barnes and Noble, Sony Reader and Apple iTunes, I began to prepare a print version because that seemed the natural progression but I secretly hoped someone would release an affordable digital book platform. I wanted the next iteration to be worthy of our highly visual craft. After 4 months or so Apple released the iPad and soon after that the iBooks Author software package which made it all possible. Not only can you have images, but there are also animated patent drawings, a tap once instant glossary, high resolution photos, audio interviews and a video clip of the very first digital editing system in 1971.

I worked with Tarek Atrissi, a super talented designer based in the Netherlands, on the layout and overall ‘look’. His suggestions were critical in making the chronological timeline graphics work. Tarek helped make Timeline one of a new generation of modern textbooks.

This platform also allows for audio (and video) embeds within a page.

How did you go about updating the book?

Apple may get some criticism about running a closed hardware/software system, and because Timeline is written with their iBooks Author program it can only be bought and read on an iPad, but I would not complain about the process for submitting digital books and updating them with Apple.

When the first text only books were launched in the ePub and mobi format, the other publishers wanted a fee for every word changed, or a new submission fee for more than minor grammatical changes. With Apple and through my agent, Tablo, I am able to add corrections or new material within a week and at no cost. I am still conducting interviews, licensing film clips and finding long lost images that will be invaluable additions, and I can do that easily.

At the end it says “to be continued.” What’s next for the Timeline series?

I have started the next Timeline, which will detail the 1985->1999 era when Bill Warner gives up on waiting for someone else to build a digital Moviola, and Randy Ubillos creates Premiere, KeyGrip and Final Cut. It really is an inspirational story. Hopefully it will be done for Christmas. 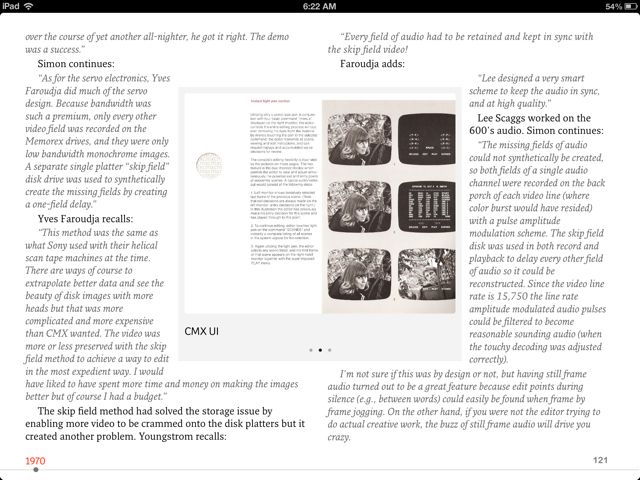 One of my favorite things are the old brochures that John has included in the book. 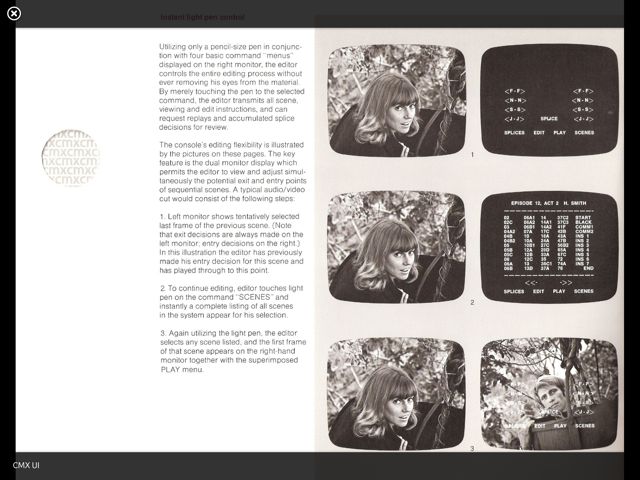 Just tap in and you can get an up-close look at the vintage sales material from the days before non-linear editors.

Head on over to iTunes to get the new $9.99 enhanced digital editing of Timeline. If you want the regular Kindle edition then hit up Amazon. I look forward to the next digital edition to see what other historic gems can be dug up. A big thanks to John Buck from all of us editors out the for all the hard work he has done on Timeline.