Kessler and Crew Defy the Laws of Physics at TimeFest 2011

What started as a gathering of like minded filmmakers in the high desert of Northern California has turned into a literal phenomena making videos go viral, servers crash and everyone talking about TimeFest.

It’s always cool to see a buzz ripple through our industry, but it’s a whole other thing when that buzz spills out to the mainstream. That’s exactly what happened when ‘Time Escape’ came on the scene.

It didn’t just blow up vimeo, over the course of a couple of days it hit the radar of the mainstream media, setting off even the Huffington Post: “Nature just got a little bit more extreme. We’ve seen our share of incredible timelapses, but this one certainly takes the cake in terms of party music.” 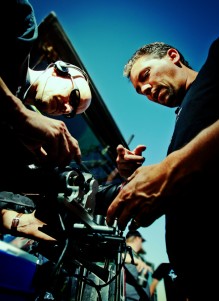 Cracks – Featuring Belle Humble is hard to beat, but as they later said, “However, this might just be the tip of the iceberg…” The Huffington Post couldn’t be more right as there was much more to TimeFest than meets the eye. Read the whole article here: www.huffingtonpost.com

All this was in response to a short Eric edited simply out of sheer enthusiasm while still basking in the afterglow of this gathering in the desert. The video:  Time Escape

If you know Eric Kessler, you probably know he’s been planning this little caper for months now. I’ve been hearing about it since February, but I guess I didn’t pay much attention at the time, because blazing hot days and freezing cold nights coupled with king snakes and no sleep sounded more like punishment than vacation. Throw in no cell service, no net and no Netflix – the notion is so disturbing that I must have just blocked it out!

Eric took some time out of his schedule to speak to me about TimeFest, how it started and what this journey meant to him. “Tom Lowe invited me out to spend some time seeing how the film was being created. I then asked Tom Guilmette and Carson Garner to come as well and then Tom Invited a few more and before we knew it we had over twelve.”

Simply put, the group shot some of the most stunning timelapse in one of the most amazing places on Earth. However, Kessler’s Time Escape is merely a glimpse of what the TimeFest crew accomplished. Even though Eric was just giving us a taste, Time Escape tipped off not only the Huffington Post, but it sparked the interest of thousands of netizens who, like myself, stared dazed at the screen wondering how in the hell did he do this?

After watching it the first time, the initial thought I had was, “I didn’t know Eric knew After Effects!” I was one, like many others who saw those red and blue lights hitting the tree and assumed it was the stock 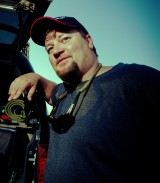 lightening effect in After Effects, but this was just not the case as Eric explains. “Everything you see in that video was exactly how it was shot. There hasn’t been any After Effects work or color grading done. I just edited it, added music it to it and added a title card and that’s it. The red lights are our head lamps.”

When asked if this was his first filmmaking effort, I was surprised by his response, “I do not consider this a filmmaking effort. I mainly went to TimeFest for product testing and to visit my great friends. I just had a few of the time lapses that were shot at TimeFest so for fun I decided to do a quick edit.” When asked if he plans to produce more Eric shrugged, “Don’t know? I guess if I get moved to I will. But I am in no way a film maker. I just got lucky that some people liked this one. I want to make gear that makes filmmakers what they are, filmmakers. That’s what inspires me.”

Life in the Wormhole

Eric says the days were short but the nights were extremely long, “We would wake up between 1pm and 3pm, get the gear ready, hit the road, stop for supplies and food, drive to location, (6-8pm) set up our shot, start the shot (10pm) go back to camp and relax until around 3am, check cams, reset for the second shot. Then we’d go back to camp, (5-6am) retrieve the gear and grab live shots if needed, 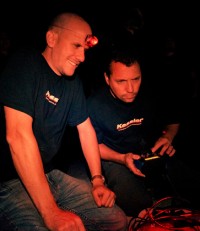 pack up, hit the road and get back to house (7-9am), dump the cards, charge batteries, eat breakfast, go to bed and then it starts all over again. These guys are machines.”

There was so much talent on the ground, I was curious how all of these guys made it work harmoniously. “Vince, Carson, Tom Lowe, and Tom Guilmette were working with me capturing some of the BTS.” Guilmette was not only helping with the BTS footage, but he was also getting interviews of everyone involved and documenting the entire event. Kessler continues, “I was also working with Tom Lowe to set up our new Keyframe Motion Control System for his timelapses.”  Beyond image capture, the trip gave Eric a chance to see his gear in the field under some of the roughest conditions.  The current line of Kessler motion control equipment got the test of a lifetime, passing with flying colors. This included battle testing Kessler’s newest and most powerful tool to date: the Key frame motion control system. You may remember seeing this in my coverage of NAB, if not check it out here:  HDSLRShooter.com/kesslermoco

We expect manufacturers to push their R&D teams to test their new products, but it’s something extraordinary when a manufacturer takes their products into battle with the interest of putting them to the test in the real world. In regards to field testing his products, Eric had this to say “When I travel with my own gear and start packing it around, my mind automatically goes to how can we make this lighter. It’s one thing to hear other people’s ideas about your products, but once you start lugging this stuff around out in the field, you start to put more of your heart into it. Going on this trip was invaluable.”

One viral video from TimeFest was awesome, but who knew there was another right behind, when Tom Guilmette and Eric Kessler released the BTS video shot and produced by Guilmette. He had this to say about the experience, “This trip was a blast and I am looking forward to working with the TimeScapes guys shooting more behind the scenes for the Blu-ray release. The thought of going to some of the most remote and beautiful places on the planet armed with Canon DSLRs and Kessler moco kit is a dream come true for me.”

Tom wasn’t packing a major camera package. Partially for the size and partially for the Night Vision, he shot with the Sony SR-11. In a world where people wear the brand name of their cameras as a mark of their talent, 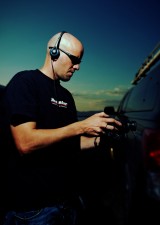 some might be sheepish about using a consumer camera for pro applications. This is especially true considering who was on the TimeFest roster. Guilmette talks more about his choice in cameras, “I decided to travel very light. No big cameras, no DSLRs, no sound guy. Just me and two tiny consumer Sony SR11 handycams. I use these $500 gems to shoot all my video blogs and love to tell people that “I am shooting 1080i”. Tom couldn’t be more right, I have one myself, and it truly is a small wonder.

When the TimeFest BTS hit the net it blew up in a major way. Since launching a mere six days ago, it has 67,000 views collectively. With the views came the press, ever curious as to what all the fuss was about. Casey Chan of Gizmodo had this to say about the BTS, ” I love watching passionate people in their element, doing what they love and killing it. Think of it as a short documentary, I zipped through the whole half hour like it was nothing. I think you’ll do the same.” You can see the entire article here:  gizmodo.com