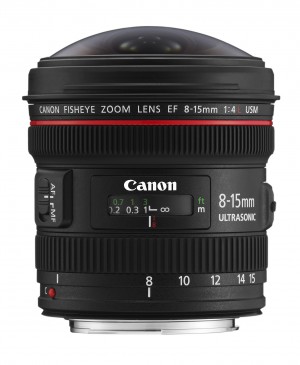 Last week I wrote some of my thoughts on the new Canon EOS 60D and compared it to the already popular 7D. This week I'm going to take a look at some of the lenses that Canon announced on the same day as the 60D. Personally I can't remember a day when Canon has announced so many new products all in one day, and some of the new lenses they introduced are worth taking a look at. First up, the 8-15mm fisheye zoom.

This lens created quite a stir when the press releases were first published. Just judging by the traffic stats on my own personal website, this was the lens that most people were searching for information on after the announcement. The camera based rumor websites love to speculate on upcoming products and whilst some of them often get remarkably close to specifications on cameras, lenses seem to be a bit harder to get information on. Not a single site came even close to predicting a lens like the 8-15mm f4 L.

For me this is a very exciting lens because I often use fisheye lenses in my action sports work. It allows you to get very close to a subject but still show a huge amount of their environment. For Canon shooters though there has long been a problem. The only Canon fisheye was the 15mm f2.8. This produced a full 180 degree fisheye image, but only on full frame cameras as it was originally designed for film cameras. Users of crop cameras with the 15mm f2.8 were left with a “semi-fisheye” look that did not show the full 180 degree field of view that defined its name. On a 1.6 crop camera like the 50D, the view was in fact not even close to 180 degrees. Nikon users have long had the excellent little 10mm fisheye for their crop cameras but Canon users were left with a lacklustre selection of third party options from Sigma and Tokina.

With the new 8-15mm zoom lens, Canon has managed to do 3 things. Firstly replace the aging 15mm f2.8. Secondly create a lens that delivers the full 180 degree fisheye view to both 1.3 crop 1-series cameras and 1.6 crop cameras like the 7D and 60D. Thirdly add an entirely new type of lens to their lineup by creating a circular fisheye lens for full frame users. The fact that they achieved all these things with just one lens is quite remarkable and very unexpected. For users like myself who own several cameras of multiple crop factors (full frame 5dMKII and 1.3 crop 1DMKIV) this is even better because now we have one lens to cover all of our fisheye needs! 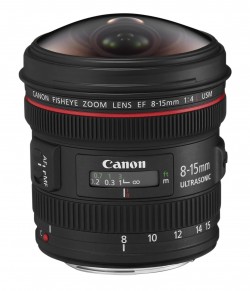 The lens is not expected to ship until January 2011 and when it does, MSRP will be around $1400. It weighs in at a not inconsiderable 19 OZ or 540g and comes with a lens hood that will only work when being used with crop sensor cameras. The lens hood also features the new lock switch first seen on the new 70-200 f2.8 L IS II whereby you must push the lock down whilst simultaneously rotating the lens hood to remove it. Canon also thoughtfully provided a locking mechanism which holds the lens in the correct zoom position at 3 key stages 10mm, 12mm and 15mm. These zoom lengths correspond with the points at which there will be a full fisheye view with no vignetting on the 3 available crops of sensor. I'm a little worried about the protrusion of the glass on the front of the lens though. The previous 15mm f2.8 lens had a fixed lens shade that helped to protect the front element. You'll certainly have to be careful when handling this lens but overall I am very excited about this product. It fills a lot of gaps in the lens lineup and does so with L lens build quality and weather sealing. The change from f2.8 to f4 does not worry me in the slightest with the high ISO capabilities of cameras these days. And generally f2.8 on a fisheye is not selected to narrow depth of field anyway because DOF on these lenses is inherently so big due to their wide angle. As soon as this lens is available I will be purchasing one so please check back in the future for a full review!