The NEX-VG10 makes a giant leap forward…but lacks a few things as well. 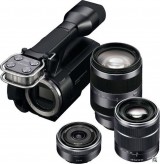 Being hailed as the new sheriff in town with aspirations to kick HDSLRs out of the video market, the Sony NEX-VG10 with its interchangeable lenses and larger chip may just herald the end of professional applications of DSLR video. However, a closer examination seems to indicate it may still lack some of the key features so endearing to those of us who shoot with HDSLRs. So before you go running to ebay or your local pawnshop with your HDSLR you might want to consider the NEX-VG10’s limitations.

Variable frame rates was one of the reasons I bought a 7D. With the NEX-VG10, you’re stuck at 30fps. If you’re not clear as to why this is so important, consider that 24fps is the key element to making video look like a real movie. Shallow depth of field, grain content and color grading that mimics film processing are important to mimicking the film aesthetic as well, but without 24p, your video will inevitably look like video and not film. This is what gave the 7D an edge over its predecessor, the 5D Mark II: the variable frame rate. This is also why Canon users pushed for the firmware update of the 5D Mark II, giving it the 24fps option.

The Sony APS sensor captures in progressive, but the camera is saving the footage into an interlaced container with a doubled frame rate. What does this mean? It’s difficult to say without having worked with it myself, but I fear that the footage will have to be de-interlaced. The limitations of the interlaced files will unfortunately have to be revealed by those who have pre-ordered or who will rush right out and get one the day it’s released.

The NEX-VG10 offers the same APS HD CMOS sensor and E-mount lenses as the Alpha NEX-5 and Alpha NEX-3 compact cameras announced earlier this year. That lens/sensor combination has been said to work extremely well together, but how does that sensor work with say, Canon or Nikon lenses? Rumor says that Sony has no plans to include an EF adapter or an adapter of any kind, so if you have a stockpile of these lenses and you want this camera, you might reconsider. However, a third party has come to the rescue. Rayqual will shortly be releasing an additional range of adapters for the Sony cameras. Priced between $220 to $275. These adapters will give you the opportunity to mount Nikon, Canon FD, Pentax and Leica lenses, however, it’s not clear if these adapters work with Canon EF or L series lenses.

Here’s the big head turner for most people: the Sony has a mic system more akin to a standard camcorder as opposed to the HDSLR’s on-board mic, which seems to have been an afterthought. Here’s the thing to consider about this mic. There are no XLR inputs on this camera, and although it has an impressive mic array, unless you want to capture every sound in the room, you’ll need either a Sony mic using their proprietary shoe or you will have to provide your own. If you insist upon using XLR mics, you’ll have to use a Juicelink or similar device.

The NEX-VG10 makes a giant leap forward to bringing features to the consumer that were only available to professionals, but the camera still lacks some of the most meaty parts of the HDSLR. However, as Panasonic prepares to release its interchangeable lens camcorder in the Fall of 2010, we should consider this device a sign of things to come.