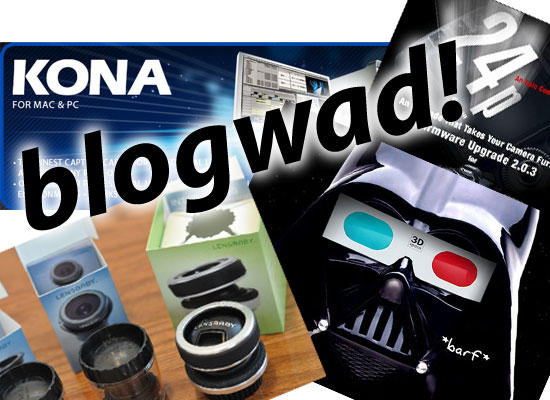 I used to have a semi-regular feature on hdforindies.com where I’d just scoop up all the interesting things that weren’t quite worth their own articles, and publish those as what I called a blogwad. Today I’m bringin’ it back, with a nice little collection showing my current interests these days – an article on why after-the-fact stereoscopic conversion is weak/lame/bad, a review of the LensBaby selective focus system (which is designed for still lenses, but no reason why I couldn’t use it on my Red with my Nikon mount adaptor), and an article on data recovery and good backup techniques (relevant since I accidentally trashed my 800GB iPhoto library recently, and have been poking along at getting it all back together). NEW – Also stuff on Canon 5D Mk II 24p firmware problems and AJA updates.

Continues after the jump.

Why after-the-fact stereo conversions suxor, relative to shooting with two cameras in a stereo rig. Nice critique and finger wag at the industry.

The Movie Studios' Big 3D Scam – movie studios – Gizmodo:
“The process of making a movie 3D after it was shot is a complicated and time consuming process but can be somewhat convincing. The problem is it will never reflect the same results as if you were filming using two cameras, simultaneously, from slightly different perspectives. Endless rotoscoping provides layers that can be separated to fake a different perspective for the second eye, but that’s what it looks like, layers. So yes, you can push things away and pull things forward and enhance the depth, but the contentwithin each layer has no depth.We use our eyes everyday and whether you know the geek stuff or not it’s just not what we are used to seeing. The stereo technicians involved in bringing the images to us in 3D in the best possible way have their hands tied in some ways, they’re not often working with two true perspectives.?

The problem is it’s expensive and difficult to do it right.”

I took a long, loving look at the LensBaby line when I was at PMA a few weeks ago. Engadget reviews it:

“The Double Glass that’s included with the Composer was easily our favorite of the optics we tried. Sharpness was way better than expected, and the drop-in aperature rings allowed for all sorts of imagination-filled shots. We tended to prefer the F/4 ring for our style, but we definitely appreciate the options that are bundled in.”

Daring Fireball: An Ode to DiskWarrior, SuperDuper, and Dropbox:

“Three weeks ago the hard drive in my MacBook Pro went bad. So far as I can tell, I didn’t lose a single byte of data. Here’s how.”

—–
bonus round:
AJA KONA Product Line Goes Cross-Platform : – one card for all platforms – used to be the same hardware with different firmware, now buy it once and use it on a Mac or Windows box. Good. Flexibility makes me happy.

ProLost – ProLost Blog – The Eagle Has?Landed: “The 24p firmware update for the Canon 5D Mark II is live on Canon’s site.” – and it was people like Stu that made it happen. Good on ya, mate! Hooray! Now if only it had a decent codec, didn’t have such bad rolling shutter, could record for non-limited chunks of time, didn’t have such bad aliasing issues due to line skipping etc., we’d have a real video camera here! Oh, Scarlet, wherefore art thou?

I think Scarlet is still a ways out – notice how Red gave us Mysterium X upgrades (still haven’t been notified on my #417 yet) to get us all excited and distract from the lack of Epics? I think if we see Scarlet shipping and working in bulk this year it’ll be a happy/lucky event. Not that I have any inside info, just observing their public rate of progress.

THURSDAY AM UPDATE – except for DOH!: “Users are reporting that when shooting using one of the Custom image preset modes (C1, C2, C3), audio is NOT RECORDED”

WEDNESDAY UPDATE – a bit more on the subject:

Giz Explains: How Data Dies (and How It Can Be Saved) – Digital rot – Gizmodo: “Google, with its millions of servers, is in the best position to test hard drives from every manufacturer, and conducted a massive study of HDD failure. Basically, if a drive makes it past the first six months, it’s pretty likely to make it through Year 4, but it is going to die at some point (and makes/models die in batches). As you probably don’t need to be told, hard drives can fail in any number of ways.”