A while back I wrote an article about a spec shoot I did promoting an as-yet unfunded motion picture project. For various reasons the project wasn’t finished, so I took it upon myself to cut the footage into a short piece for my reel. I mixed in some footage from a light drawing test that we did for the same project using a Canon DSLR.

I eliminated two scenes from my cut: one because the actress was too hard to understand, and the other because the actor just wasn’t that good. It’s sad but true that performance can get in the way of a viewer watching a cinematography demo reel. I’ve learned that it’s sometimes necessary to kill great shots because a bad performance is too distracting and leaves a bad impression in spite of the lovely imagery.

I don’t remember what camera we used for the light drawing but it was a Canon DSLR operated by a still photographer the director knew. They invented a rig that allowed them to dolly the camera during the light drawing animation process by mounted the camera to a long 2×4 piece of wood. The photographer moved the camera one inch every frame. It worked well enough for a test but not well enough for a professional-looking piece. Fortunately a DSLR frame is roughly equivalent to a 4k digital cinema file in size, and it’s quite easy to zoom in and reframe as necessary.

Each light-painting exposure was 30 seconds long. The table lamp in the background was turned on for five seconds, and I popped a strobe kit once just before turning the table lamp off. Then the director raced in with a flash light and did his thing. He’s done this kind of thing before and he’s very good at it.

The final result was okay, but I wanted something more. While wandering the Internet I came across a free plugin called Stib’s Better Zoom Blur that did just the trick. It smeared the light trails enough that it became harder to see the specific path the flashlight took. 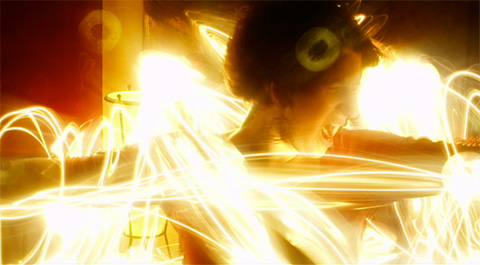 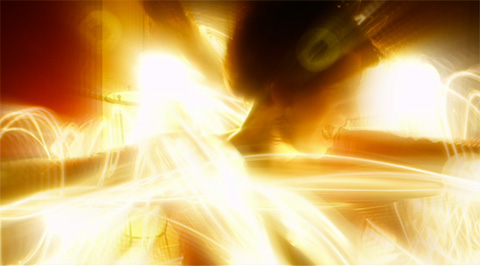 Color correction was a mix of Magic Bullet Looks and, for the first shot, Tiffen DFX’s Gold Glimmerglass digital filter.

The final result is a combination of my editing the “documentary” footage and also cutting segments out of the director’s final mixed light-painting test. Enjoy!