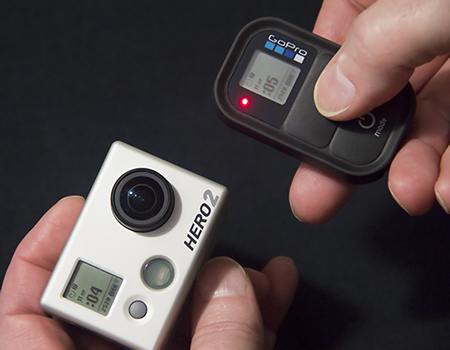 The controls on your GoPro camera are no longer out of reach!

The new GoPro Wi-Fi BacPac and Wi-Fi Remote allow you to control your GoPro camera from up to hundreds of feet away – which includes powering up your camera, changing all the menu settings, triggering the camera to shoot and powering it off again to preserve battery life. The Wi-Fi BacPac and Remote have their own built in rechargeable batteries, so they’re no further drain on your GoPro camera. I’ve got two GoPro Hero2 cameras already so I wanted to test out the new Wi-Fi BacPac and Wi-Fi Remote on both of them shooting at the same time while my hands were otherwise “full”. I’ll share my results plus point out some very important items you need to be sure to look at when setting up your system – plus some things to be aware of.

(If you’re looking for the technical specs and my overview of pros/cons, then please see the last page of this review)

What comes in the Wi-Fit Combo Kit:

The GoPro Wi-Fi Combo Kit comes with all of the accessories you see here.

If you’re like me, you usually skip over the instruction booklets/manuals and just follow your intuition and just start slapping parts together… until you hit a wall. I have to say in this case, you HAVE to follow the instructions exactly or your devices just will NOT WORK!

But if you STILL don’t want to read, then at least watch this video from the GoPro website.

Get instructions and watch the installation/update tutorial video on the GOPro website.

Starting with updating the Cineform software (available free from the GoPro website: http://gopro.com/support/cineform-studio-software-support/ ) – this will be important for updating the firmware in all your components. You have to follow the correct order (this is the voice of experience talking!) as listed in the instruction booklet… otherwise, it won’t work correctly!

It’s also imperative that you charge up both the Wi-Fi BacPac and Wi-Fi Remote fully with the provided cables before attempting the firmware updates. The Wi-Fi BacPac has a battery level and signal indicator LCD on the back which also lets you know if it’s powered on. The Wi-Fi Remote requires that you remove the attachment prior to attaching the USB cable. This did seem like an odd attachment design for the USB cable on the Wi-Fi Remote but thinking possibly it was designed as such as to not lose the remote if you’re charging in your car or off a laptop remotely.

It’s really important to be sure both of your GoPro Wi-Fi accessories are fully charged before updating firmware or putting to use!

(Continued on next page…)

Since I had two GoPro Hero2 cameras and two Wi-Fi Combo Kits to work with, I did what any good production guy would do and that means getting out the tape and Sharpie marker to ID which remote goes to which device. But note that you CAN set up one Wi-Fi Remoter to control up to 50 GoPro cameras at a time! I may eventually experiment with that more as I add more cameras and accessories to my arsenal.

Not elegant but very effective!

Putting the GoPro Wi-Fi BacPac & Remote to the test…

Those who know me and have read my other GoPro reviews, also know that I’m not a surfer, skateboarder, snowboarder, racer, BMXer or skydiver… but I like off-roading and I like to use my animals and patio furniture in my tests a lot! I’ll spare you the patio furniture this time but will subject you to the magnificent beauty of our young Palomino Quarter Horse Mysty once again. 🙂

Since working with a 1000lb animal that can crush you, your attention has to be on what you’re doing with the horse – not on fumbling with cameras and gear while they’re running around you. This is where the GoPro is handy for some fun POV but made much easier to control with the new Wi-Fi BacPac & Remote.

I selected several locations for fun POV shots over the weekend – putting the GoPros in harm’s way a few times, but aside from a stray “kick” they came out well and nothing got crushed to death at least!

I ended up shooting over two days because I quickly learned one very important thing in the process of shooting on the first day: FULLY RECHARGE ALL YOUR DEVICES PRIOR TO USE! and MAKE SURE ALL COMPONENTS ARE SWITCHED OFF DURING TRANSPORT! Even if it looks like the battery level indicator is 2 out of 3 bars, it doesn’t mean anything when you set out to go shoot… and make sure you don’t inadvertently leave one of the Wi-Fi Remotes ON when you stuff everything in your bag, or that it doesn’t accidentally get turned on in your pocket.

You can see where this is going, right?

Sure enough, on the first day, one of the remotes I had in my pocket got turned on while driving to the stables and getting things set up and I hadn’t noticed. I managed to get about a few minute’s worth of usable time out of it before it shut down. But – because of this I also learned that when your remote battery dies and powers-down, SO WILL YOUR GoPro CAMERA! Since you can turn your GoPro camera on and off with the remote, I assume that it’s designed that way so your camera doesn’t keep shooting if something happens to the remote while the BacPac is on and powered-up. The weird part was even after I turned off my Wi-Fi BacPac, I still could not manually control my Hero2 without disconnecting the BacPac entirely. This meant since I didn’t bring a regular back “door” for the housing, I couldn’t use the camera the rest of the day. I did notice on the second day when one of my GoPro camera’s battery died mid-shoot, the associated Wi-Fi Remote showed that it was still connected and running. It wasn’t until I tried to stop it that it wouldn’t and I had to go over to the camera to investigate and saw it was indeed “off”. I had to power-on the camera and then power off the remote to shut them both off together to stop the remote from thinking the camera was still shooting. This is apparently the opposite issue of having a low-battery in the Wi-Fi Remote.

So – I’ve learned that I need to transport the Wi-Fi Remotes int he case with the cameras and not just stuff them in my pocket like a Key Fob! (unless I’m actively shooting with them that is!)

Instead of boring you with a bunch of set-up photos, I’ll just share a short edited video that includes some of the shots I got over the two days from various POVs – including the slight “trample” toward the end:

Overall impressions and all that technical stuff you wanted:

My experience with the range of the Wi-Fi BacPac and Remote was surprisingly good! I had to turn on the “beep” again to I could tell if it was indeed working from across the arena (about 300 feet away at times) but it always worked just fine (as long as my devices were fully charged that is). Once you understand the entire updating and configuration processes, it’s smooth sailing and very easy to use. I’m much more likely to use my GoPros on productions now for various POV cams and hard-to-get places – just because of this new capability.

The GoPro Wi-Fi Combo Kit retails for $99.99 at the GoPro website

*Coming Soon – the ability to do Live Video streaming through a Wi-Fi network device like a smartphone or 3G enabled tablet/laptop – with a Free software update on the GoPro website!

The GoPro App is coming soon!

As soon as it’s released, I’ll be writing another review on the GoPro App later this Fall. With the GoPro App and your Wi-Fi BacPac installed, you’ll be able to use your smartphone or tablet to control your GoPro camera and all the settings, including a live preview of what your GoPro camera is shooting in real-time! Stay tuned here on the ProVideo Coalition website for more as soon as it’s available!