Faster than ever, and huge game-changing updates to industry standard compositing system 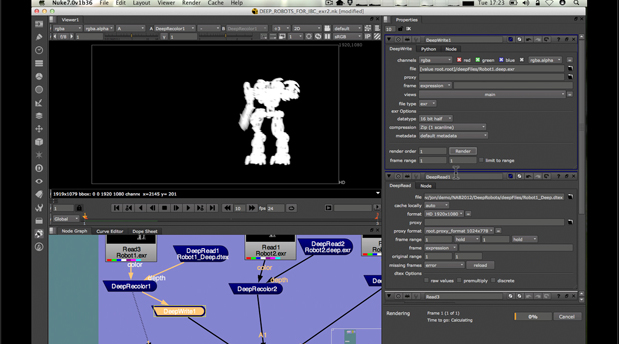 Leading visual effects software developer, The Foundry is pleased to announce NUKE 7.0, a revolutionary version of its industry leading compositor.

The highly anticipated release of NUKE 7.0 is packed with a wide range of new features and substantial improvements. The updated version will be available to purchase this Autumn. Based on feedback from NUKE’s wide user base, this version of NUKE is faster and more user-optimised than ever before. As well as some very exciting new additions, the focus of this release has been to really increase performance as well as adding support for Alembic and OpenEXR 2.0 Deep Data.

Speed Improvement
NUKE 7.0 introduces RAM cache, a sought after feature that will give users realtime playback. Also debuting in this major release are a variety of GPU accelerated nodes for NUKEX including MotionBlur, Kronos, Denoise, VectorGenerator, Convolve and ZDefocus. This is a fundamental change that will allow users to utilise the power of their GPUs to speed up interactive image processing times. When the GPU is available NUKEX will now take full advantage of that power. If however it’s unavailable, the software simply reverts back to the CPU without any need to adjust settings.

Jon Wadelton, NUKE Product Manager at The Foundry comments: “This is the one people have been waiting for. It’s our biggest ever update to NUKE and one that’s going to keep a lot of VFX people happy. Core tools have been improved, brand new functionality has been added and NUKE is now faster than ever. We are really proud of it and can’t wait to get the release out later this year.”

Blurring the Line Between 2D and 3D
NUKE 7.0 also brings with it a number of options that allow artists to do more within NUKE. Users are now able to perform lighting tasks in a comp using the ReLight node and even model using NUKEX’s new ModelBuilder. Both of these additions reduce the need for artists to jump in and out of other programs or hand work off to other departments.

Streamlined Compositing
The roto tools in NUKE have also been entirely redefined to enhance performance and improve stereo support, giving artists more control than ever before. Support for new camera raw formats has been added including Alexa ARRIRAW and the latest R3D SDK. NUKE 7.0 includes Primatte 5 and a brand new 2D tracker with big updates to the workflow and speed. The SplineWarp node and Dope Sheet have also benefited from major improvements.

The Foundry is a world-leading innovator in visual effects technologies and is internationally renowned for its product design and collaborative approach. Founded in 1996, the company has established itself as a critical partner to major feature film studios and post production houses worldwide including The Mill, ILM, The Moving Picture Company, Walt Disney Animation, Weta Digital, Framestore, Sony Pictures Imageworks and Digital Domain.

The company’s products have been used to create breath-taking effects sequences on a wide range of features, television projects and commercials. High profile examples include the 2012 Oscar® winners, HUGO (Best Visual Effects) and Rango (Best Animated Feature Film) as well as the EMMY award winning Boardwalk Empire. The Academy of Motion Picture Arts and Sciences awarded a Sci-Tech Award® to The Foundry’s development team for the FURNACE image processing suite in 2007 – and the company now holds two products with AMPAS Sci-Tech Award® winning technology including high-end compositing system NUKE.

In 2011 The Foundry ranked 54th in The Sunday Times Tech Track (up three places from 2010), and debuted in both the Sunday Times International Track and the Deloitte
Technology Fast 50 lists. With a substantial portion of the company still owned by the staff, The Foundry is still run by its original management team.