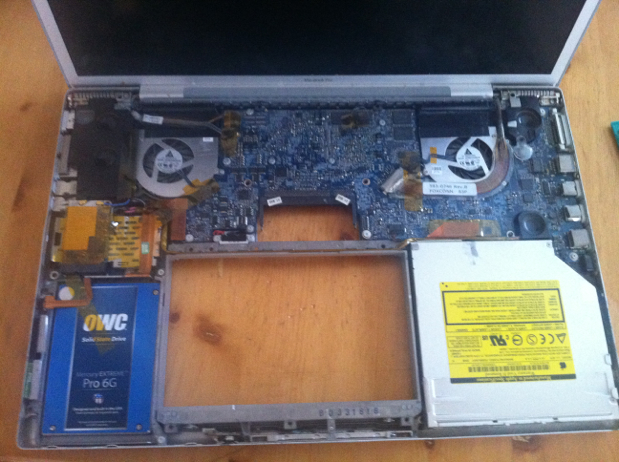 The inside of my MacBook Pro with a new SSD drive and a fast 7200 rpm media drive where the optical drive used to be.

Last December the internal drive on my trusty late 2008 MacBook Pro failed, irreparably. Suddenly I was faced with a technical fork in the road — buy a new MacBook Pro (already kinda long-in-the-tooth specs wise) or go Steve Austin and make my old machine better, faster than before. I could not bring myself to spend money on a new machine that PC laptops would render circles around. Plus I was kind of attached to my old computer in that oddly inappropriate way that nerdy fanboys/girls can become emotionally attached to Apple products.

This was the last pre-unibody machine Apple made, and the most blinged-out computer I had ever owned — a true mobile workstation. It was quickly put to use as my portable production hub — I was writing treatments, storyboarding and shot listing in prepro. On set, I’d hand it off to my assistant for ingest and conversion duty, then I’d take the machine home at night and go through dailies. In post, it quickly became my After Effects, FCP and Color machine. I quickly realized 2GB of RAM was not enough, so I maxed it out to 4GB. The machine worked flawlessly and it went with me everywhere. And honestly, it only started to show it’s age in the last year or so as more of my work required a really fast GPU for previz work.

The big screen and Express Card slot work really well with Sony F3 and Alexa workflows. The 64bit CPU sings with Lion and now CS6. So when the drive died, I just couldn’t bring myself to upgrade to a newer machine that wasn’t a vast improvement over what I already had. In the interest of resource conservation, and keeping a beloved object around a few more years, I rebuilt my machine.

When I started thinking of my rebuild, I asked myself:

1) What are the parts of the machine I never use, and what do I use all the time?
2) Where are the bottlenecks in I/O?

The answers were easy. First, it had been months since a DVD had spun in the optical drive — all my media/ apps were downloaded over WiFi or carried on FW800 drive. Second my machine chokes on ProRes HQ 422 and 444 QT files — that’s what probably killed my drive in the first place.

1) Replace the dead boot drive with a faster, quieter 120GB SSD drive.
2) Rip out the optical drive and replace with a dedicated 750GB 7200 rpm drive for storing media.
3) Upgrade the RAM to the “officially not supported, but totally will work” limit of 6GB.

I have done a ton of machine repairs and upgrades on desktop machines, but I’ve never opened up a laptop before. Thankfully the internet and Google exist and I just typed “upgrading a pre-unibody MacBook Pro” into my browser and, voila, all kinds of great information plus free instructional videos.

I spent about 600 bucks at Other World Computing and got:

1) An SSD drive (OWC Mercury 120GB) plus mounting bracket
2) A little plastic enclosure to let my Optical Drive live a new life as a USB peripheral.
3) A 4GB DIMM to replace one of my 2GB DIMMs.
4) A 750GB Hitachi 7200RPM Travelstar drive.
5) MacBook Pro tool kit with all the right sized tools

Then another 100 bucks to MCE Tech and I had their OptiBay Hard Drive bracket for the Hitachi to live it’s life in the optical bay.

This is the really anti-climactic part of the article. Once I had all the proper parts and a solid tool kit, tearing my machine down and putting it back together took about 45 minutes following the info I found on-line. I put all the screws in, plugged it in, attached my new/ old USB Optical Drive, formatted the drives and started loading my apps back on. The thing that took the longest was installing software. I was ready for an all night computer surgery session.

With the quiet killing off of the 17″ MacBook Pro, my decision to keep my old one running seems prescient, although it was borne out of a desire to keep a useful machine working. The machine has never run faster, I can easily work with ProRes 444 1080P files since they are loaded on a dedicated drive. The OS and apps are zippy on the SSD and the machine boots in record time. The only downside is that two drives suck the battery down quick.

So I bought an extra battery a few weeks ago.

Disclosure: No one gave me anything for free or discounted to fix my machine or write my article. I rebuilt my machine using information I found on the internet.