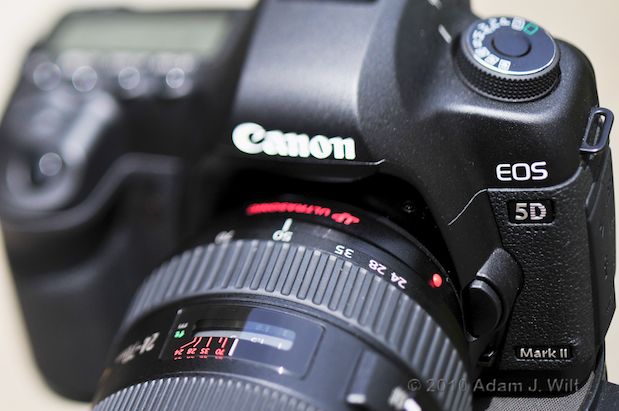 “Help Me”, the season 6 finale of “House”, was shot with Canon 5D Mk II HDSLRs using off-the-shelf Canon still lenses. This past week, Director of Photography Gale Tattersal quashed a few rumors about how the show was shot, and commented on what he liked about using the Canons as cine cameras.

Mr. Tattersal‘s comments were made on the Cinematography Mailing List, and I reproduce them here by kind permission of Mr. Tattersal and CML’s Geoff Boyle. I’ve made minor edits for formatting and readability, and added some links, but the content is solely Mr. Tattersal’s.

Context for what follows:
• Much of the action for the “House” episode “Help Me” takes place in a collapsed parking garage.
• “House” is usually shot with 35mm film cameras, which are noisy enough to preclude sound recording in enclosed, reverberant spaces like collapsed parking garages.
• BarTech and Preston make wireless follow-focus systems.
• According to posts on CML not subsequently corrected or contradicted, the Canon footage underwent considerable post-processing, presumably to suppress the residual color moir© and aliasing to which the Canons are rather prone (I’ll discuss this further in my upcoming 5D Mk II review) yet which were notable by their absence in the finished show.

I’ve never set out to do anything because it was trendy or hip in my career… camera choice is very secondary to what is demanded in the script and dictated by the location or set.

We spent four days initially on our hands and knees, and after the secondary collapse, on our bellies shooting with 3 5Ds… in a set with hard ceilings… ANY film camera in that situation would have meant that the entire dialogue would have to have been looped… and for such emotionally gut wrenching scenes, out of the question.

The huge sensor of the 5D creates a look that is unachievable on any other platform… a digital version of VistaVision shot at f/1.2 and f/1.4… so you can put your characters in their own world and remove the distraction of background elements that so often distract or vie for attention… this is the unique and extraordinary ability of the 5D, and in my humble opinion, and for this particular episode, easily outweighed the compromise of 8 bit compression, and focus pulling nightmares.

We shot 300mm lenses hand held… using the image stabilizer… literally a Steadicam in the palm of your hand… all of these things impossible to do in any other way.

[A] rumor that keeps popping up is that we had the lenses modified in some way… not true. In order to help out our 1st ACs Don Carlson and Paul Janossy, I asked Canon if there was anything that could be done to put stops on the lenses to prevent the clutch slipping beyond infinity and minimum focus… a problem that caused our BarTechs to return to a different place every time you went in both directions… but sadly this turned out to be impossible… so there you have it… the lenses we used were off-the-shelf regular lenses… which made the job that Don and Paul did that much more difficult, and worthy of great recognition.

[W]e did use the 5Ds with all the bells and whistles… we had support from Redrock Micro… matte boxes, follow focus… everything. We used BarTech follow focus remote focus devices… as Prestons were way too powerful for the Canon lenses… that was the way that the A and B cameras were operated… we also had a C camera that we christened ‘ninja cam’… with a very experienced Canon lover/Camera operator called Chris Murphy… whose brief was… more or less… “just shoot some great coverage”… and he was left to his own devices… turned out 18% of the shots in the final episode were his…

I personally really dislike the clean sharp look of digital high end cameras… way too clean, way too revealing, way too synthetic… first thing everybody seems to do is to add grain and diffusion in post… so it looks like film. Many people actually like the H264 compression… it has a more organic look… I personally would like to have the choice of a higher data capture… but I’m sure Canon are working flat out to give us a direct feed from the sensor, bypassing the compression circuitry…

I also did a lot of tests to look for a ‘softer’ more cinematic rendition… and I found the 5D sensor was less harsh than the 7D and much less harsh than the 1D MK IV… but it’s all very subjective. I have the first full frame Canon camera that canon made … the EOS 1DS… and i will never part with this camera… as it is a beautiful organic soft shooter for stills.. I think (from memory) it’s only 12 megapixels… but it shoots portraits to die for…

When you consider that all of this amazing HD came about because photo journalists asked Canon if there could be a video record facility to do web interviews with some of their celebrities after a photo session… and this is just the first attempt!!! Imagine what a couple of years will bring! Anybody that has a criticism of this $2500 camera should first take a look at something that has been well shot projected on a 30ft screen… and I think they will suddenly become very quiet.

… the advantages of that platform in the ridiculously cramped sets… and the addictive element of being able to pick up the camera, the head, the sticks with one hand and reposition it somewhere else… and also the one quality that you can get from the 5D that is totally unique… that can’t be achieved on ANY other format…

I suppose it’s all a matter of taste, and personal preference… I made a stylistic choice in the “House” finale to shoot with the shallowest depth of field possible… and the 5D delivered that much better than the 7D could do…

I really wanted to put the actors in their own world, in their own headspace if you like… so if one eye was sharp and the other soft… the editors used that to their advantage.

I could easily have racked the ISO up to 1600 for all our shooting and been shooting at 5.6 or 8… but then why stop there? Why not use a Panasonic HVX200 and have everything from the dust on the front element to infinity sharp? If you are going to go for a look… then go for it… and go for it with balls. Sure it was hell for the focus pullers… but they were brave, (and very talented)… and up to the task.

We created something that has never been seen on network TV before… and most people just loved it… so I feel my choice was well justified.

See “Help Me” online (low-res Flash format) at FOX’s “House” site (or jump directly to it).

• Transcript of the Bloom / Yaitanes interview, which is much more readable if you run it through Readability first.

16 CFR Part 255 Disclosure
No material connection exists between me and Canon, Gale Tattersal, iTunes, FOX, Carl Olson, or Philip Bloom. No one has offered me any consideration or compensation for mentioning them.

I own a Canon 5D MkII and several lenses that I paid for on the open market like any other schlub.