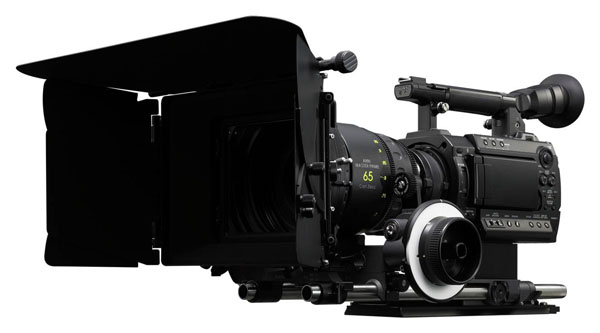 Next month marks the debut of Sony’s first handheld Super 35mm model for professionals: the PMW-F3. It’s also Sony’s first such camera with XDCAM EX recording and first with CMOS technology. And the F3 starts at just $16,000 MSRP. The new camera is beginning to make a name for itself after some sweet pre-production tests and first-on-the-block Vimeo posts. In this article, we’ll take a look at the new camera’s Super 35mm image sensor, and see exactly what Sony means by “Super 35.”

Sensor dimensions are more than specsmanship. Larger sensors help photographers limit depth of field. As you learned in Photography 101, shallow depth of field enables you to direct audience attention toward in-focus subjects and away from out-of-focus foregrounds and backgrounds. Simply changing focus over the course of a shot can help tell the story, for example revealing a relationship between one person in the foreground and another in the background.

In addition, the sensor size has a direct effect on the lens field of view. Smaller sensors impose a crop factor that pushes any given lens toward telephoto. And other things being equal, sensor size has additional effects on image noise, dynamic range, resolution and freedom from diffraction-induced blur. For all these reasons, we devoted a previous article simply to cataloging sensor sizes.

The Super 35mm image sensor of the PMW-F3 is enormous in comparison to the 2/3-inch type sensor that is popular for documentaries, natural history and many other genres. (Note: All the diagrams in this article are on the same scale with the exception of the diagram that shows 35mm Full Frame versus 35mm Motion Picture frame.)

The Super 35mm image sensor of the Sony PMW-F3 has an effective area that measures 23.6 mm wide x 13.3 mm high-essentially the same size as the Super 35mm CCDs of the Sony F35 and SRW-9000PL, cameras that have become mainstays of high-end production in narrative features, episodic television, commercials and music videos. The dimensions are also very close to Sony APS-C class DSLR sensors. But the new sensor is not taken from Sony’s DSLR parts bin. It was developed from the ground up for motion pictures. As a result, the individual photosites-the micron-scale diodes that do the actual work of converting light into electric charge-are a honking four times the size of the photosites on Sony Alpha DSLR sensors.

To put the PMW-F3 sensor into perspective, we’ll compare it to 35mm motion picture film. 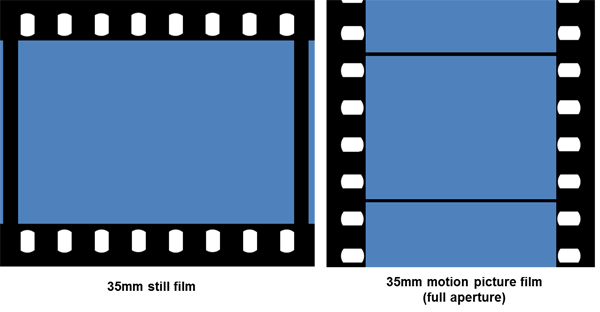 We don’t mean to say that the 35mm still frame size is never used for motion pictures. This is the frame size of the VistaVision niche film format, as well as the image sensor size of some DLSRs that shoot HD video. But this much larger size can create razor-thin depth of focus when the lens is wide open. And this makes headaches for camera operators and focus pullers. For example, one of the subject’s eyes can be in focus while the nose is out of focus. And if the scene requires talent or camera movement, all bets are off. There are practical reasons to shoot moving pictures at the moving picture frame size.

The F3 sensor compared to film

The sensor of the new PMW-F3 has an image diagonal of 27.1 mm, compared to 28.6 mm for motion picture film (16:9 extraction). This yields a crop factor of 1.06, meaning the angle of view you get from a 100mm lens on the PMW-F3 is equal to the angle you’d get with a 106mm lens on a motion picture film camera. In this way, the 35mm PL lenses you’re using on the PMW-F3 will behave in much the same way they do with film. 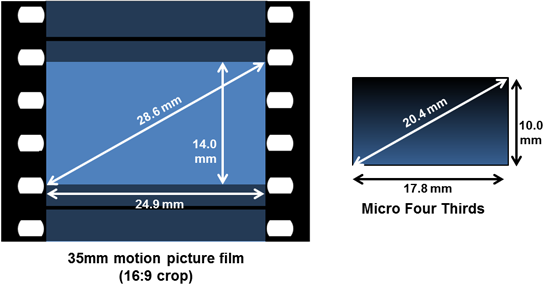 Not only is the new Super 35mm sensor nice and big, but so are the micron-scale photosensors that capture light. As mentioned, these are four times the size of the photosensors on corresponding Sony Alpha DSLR chips. A bigger photosensor can translate to better low-light sensitivity, which opens up the option of shooting with a smaller lighting package. There’s also lower noise, which means less digital grain to bespeckle your images. And the dynamic range is extended, meaning a better ability to handle intense scene highlights.

Thanks to its mega imager and oversized photosensors, the PMW-F3 is poised to delight directors of photography in all sorts of genres. Look for one soon on a set near you.