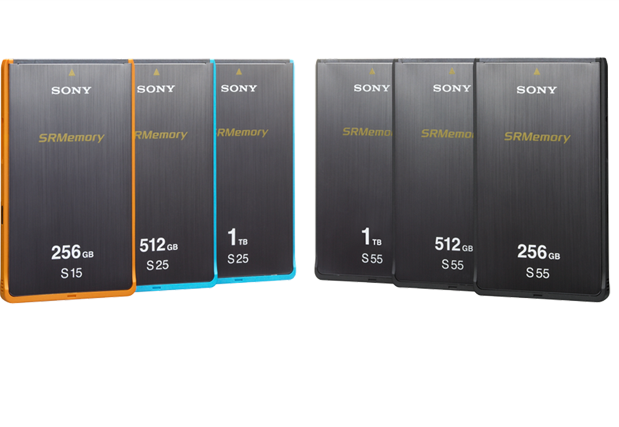 One trillion bytes in your shirt pocket.

How many hours are you willing to spend backing up your assets after a long day’s shoot? What kind of data protection do you need for an indie project, a TV episode or a $100 million feature? What data rates do you need to record uncompressed 1080p high definition? Or 16-bit linear RAW at 4K and beyond? These questions aren’t simply rhetorical. They’re the issues Sony grappled with in developing the next generation of high-end recording media: the SRMemory card. About the size of a smart phone, the new media card neatly accommodates today’s recording needs-and anticipates tomorrow’s.

5 Gbps and the need for speed

The SRMemory media card was created in part to handle the 16-bit RAW output for Sony’s greater-than-4K-resolution F65 digital motion picture camera. This is a data recording task far beyond the capabilities of HDCAM SR tape, which achieves a sustained 880 Mbps. For comparison, our SxS™ cards can achieve momentary bursts of up to 1.2 Gbps (with benchmark software; YMMV). Thanks in part to dedicated memory controller circuits inside each card, SRMemory media achieves eye-opening sustained transfer speeds of up to 5.5 Gbps, depending on grade. “S 15” media are rated at 1.5 Gbps sustained, while “S 25” and “S 55” achieve 2.5 and 5.5 Gbps, respectively. During the shoot, these data rates enable you to capture footage of stunning resolution and bit depth.

Transfer speed is just as important at the end of your shooting day, when it’s time to clone your rushes for postproduction or back up to hard disk. Using our SR-R1000 SRMASTER deck, you’ll be able to offload as much as 10 hours of HD content in 30 minutes.

1 TB capacity: thanks for the memory

The high data rates of cutting-edge acquisition threaten to overwhelm the recording capacity of conventional memory cards, which typically max out at tens of Gigabytes. That’s why Sony designed the SRMemory cards to store hundreds of Gigabytes. Rated capacities for the initial cards are 256 GB (available in S 15 and S 55 grades), 512 GB (S 25 and S 55) and 1,000 GB (one Terabyte, available in S 25 and S 55). These capacities come with some fine print. 1 GB equals one billion bytes. As with other memory cards, a portion of the capacity is used for data management functions.

The new cards will support lots and lots of recording options to work with a wide range of cameras. For example, you can capture hours of footage as NLE-friendly SRFile data using the HDCAM SR codec at 880 Mbps, 440 Mbps and the newer SR Lite data rate of 220 Mbps. Or you can capture uncompressed HD. Or you can record a pair of stereoscopic 3D streams onto a single card. Or you can capture the entire fire hose of F65 output: 16-bit linear RAW at greater than 4K resolution.

To prevent unauthorized access, SRMemory cards and the files they hold can be password protected. The controller circuits on each SRMemory card also provide data salvage functions to protect your assets from on-set goofs such as accidental power loss. More fine print: Content restoration is not always possible and cannot be guaranteed.

Standing firmly on a platform

Like other companies, Sony develops and refines individual products. But we also think in terms of production “platforms,” the wherewithal to take your project from acquisition into editing, finishing, distribution and archiving. That’s why the SRMemory card is just one part of a comprehensive, next-generation production system, a platform that includes the SR-R1 and R4 field recorders, the SR-R1000 studio deck/multi-channel server and the SR-PC5 and SR-PC4 transfer stations.

For all these reasons, we expect the SRMemory cards and SRMASTER system to prove really, really useful.