With cameras as the Ricoh Theta allowing for 360-degree video at 4K with spatial “surround-sound”, the need for four-channel recording and editing becomes essential. InstaVR announced their solution at NAB 2017. 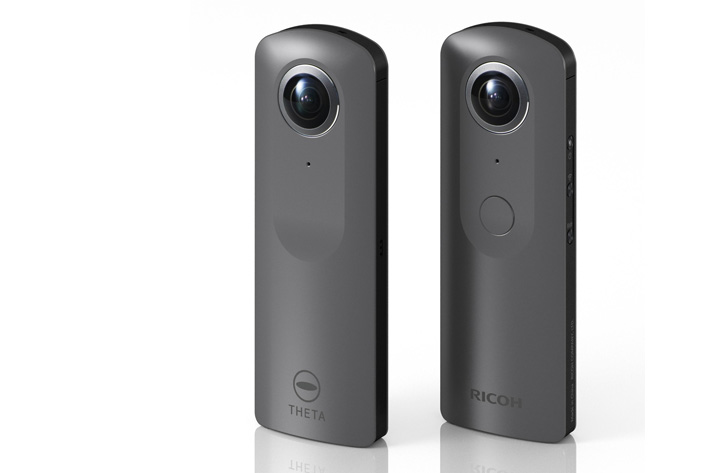 Ricoh showed at NAB a prototype of its new Theta camera, which will be launched late this year. Meanwhile, InstaVR showcased its solution for immersive spatial sound, an important part of 360 media.

The presentation by Ricoh of the latest Theta confirms the heavy investment the company made in this type of cameras. Ricoh offers, at the moment, the industry’s most extensive line of spherical imaging cameras. First introduced in 2013, Theta cameras allow consumers to record fully spherical images that show the entirety of a scene in photos or videos. The camera line’s combination of small size, high quality imagery and functionality are a result of Ricoh’s many decades of experience in advanced imaging and optical technologies. A key achievement with the Theta series is an ultra-small twin-lens folded-optical system capable of capturing two wide-angle images and then marrying them into a single spherical image.

The Theta 360-degree camera presented as prototype is able to capture 4K video at 30 frames per second. The camera will enable 4K 360-degree livestreaming, and a built-in 4-channel microphone will record spatial “surround-sound” audio. Sound is an important element of any multimedia experience, even more so when it comes to 360 media, so it is only natural that audio specialists devise solutions that work with the systems available. 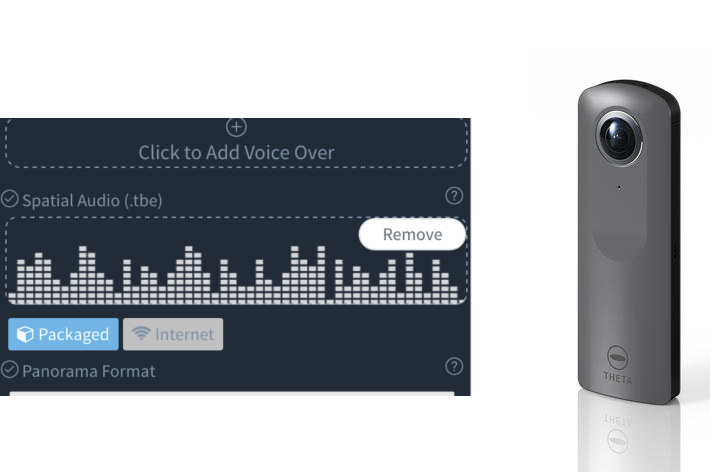 Spatial audio, which is an important part of 360 media, presents sounds both inside and outside the view of the VR user, allowing for a truly immersive audio quality. The benefits of spatial audio include better representing the actual experience of real world sound, as well as garnering the attention of the VR viewer and prompting them where to turn their head in the virtual environment. This enhanced audio feature is valuable for a broad array of use cases, particularly storytelling and entertainment VR experiences.

Steven Poe, VR Producer, utilizes InstaVR’s spatial audio feature in the immersive applications he builds for Mandala Health, a company focused on improving healthcare treatments in pain management, clinical psychology, and meditation self-optimization. According to Poe, “The soundscape is more than 50% of the brain’s transference. We hear sound faster and more accurately than we see.”

He creates Mandala Health’s spatial audio design by mixing quad ambisonic live recording with custom soundtracks, for a digital health product in sync with natural rhythms and Fibonacci animation timelines. “Unfortunately the ability to playback spatial audio has been lagging compared to advancements in 360 video,” noted Poe. “InstaVR solved that by allowing VR Producers to upload spatial audio files once and deliver across all the popular VR viewing platforms.”

With Ricoh announcing its Theta 360-degree camera with four-channel audio recording, the value of spatial audio becomes even more pronounced in creating a truly immersive environment. InstaVR users can combine the 360 4K video and spatial audio from their Ricoh cameras to produce VR apps of extremely high quality, which can be experienced across the major VR headsets.

“We’re very proud that our clients can now incorporate spatial audio into their VR experiences,” said Daniel Haga, Founder and President of InstaVR. “Our goal has always been to empower clients to create the most immersive, engaging, and awe-inspiring virtual reality,” said Haga. “Supporting spatial audio gives our most savvy clients the opportunity to do just that.”