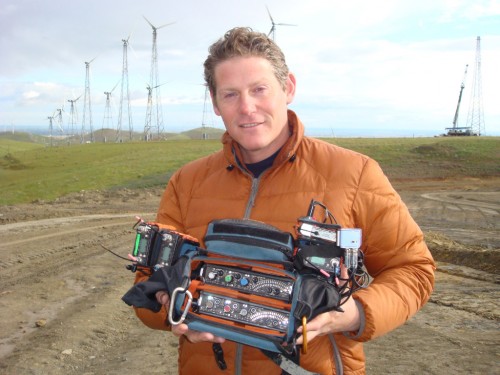 “Doing sound for a show like MythBusters is always an adventure,” says Jepson. “We frequently don’t have any idea what is going to happen in an experiment, because no one has ever done it before; we have to be ready for anything – no grips, no utilities, no A2s, and no second takes. I am required to make sure good, clean audio goes to all devices that record audio. Sound Devices’ 302 mixers help me achieve this on set.”

Jepson’s setup involves two Sound Devices 302 mixers linked together. Audio sources include a Schoeps CMC6 boom-mounted mic or a Neumann KMR82 mic and up to five channels of Lectrosonics wireless lavalier mics mixed to the second channel. The 302’s stereo outs are sent to the camera via stereo wireless with IFB sent back the camera’s return feed. From the mixer, Jepson occasionally sends a wireless feed of either the left or right signal out to a second camera on site and/or a wireless headphone mix to the director. MythBusters currently uses several Sony cameras on set, including the PDW700 Sony Professional XDCAM® HD Camcorder, HVR-Z1U, HDR-HC7, HDR-HC9, DCR-CX12 and HDR-HC3 models, with solid-state cameras used for the high-impact shots, while all talent dialogue caught on Lectrosonics Digital Hybrids. Jepson sets the output limiter on his Sound Devices’ 302 mixers to +8 dBu, which allows for good send levels onto either the Sony XDCAM or HVR-Z1U used on the show, so he doesn’t have to worry about clipping the meters on the digital cameras.

The crew for a typical MythBusters episode consists of the director, camera operator, sound mixer, and second camera operator. With a high shooting ratio, Jepson needs an audio mixer that can withstand extreme climatic temperatures and explosive sounds, whether it’s a 115-degree sand storm in the Mojave desert, 50 below in Alaska, or shooting for two weeks in salty, humid air in the middle of the Caribbean Sea. Thanks to their size, dependability, I/O options, and redundancy, two linked Sound Devices 302 mixers fit the bill without compromising audio quality.

“I have been running the same two Sound Devices mixers on the show five days a week, 11 months a year for the last four years,” says Jepson. “I have been mixing for television for about 15 years and I have used a lot of mixers. When you add up all the advantages you get from a linked 302 setup, it is the best solution for me…nothing else could compete, and that’s no Myth!”

Designed specifically for over-the-shoulder field productions, Sound Devices’ 302 mixer has a complete feature set in a compact, functional design. Easily adaptable to any production setup, the 302 can interface with wireless transmitters and receivers, camera audio inputs of all kinds, and external audio recorders.