Will people from 60Hz countries be again tempted to import 50Hz model cameras to shoot in 25p? 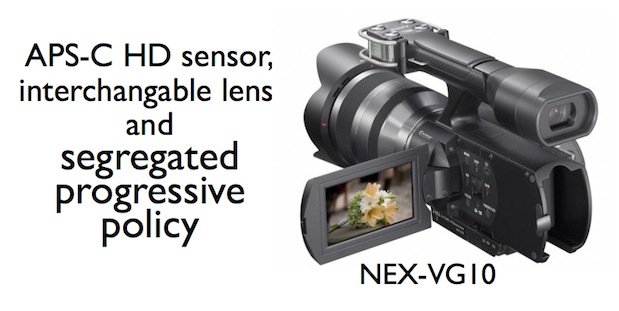 As first covered here in ProVideo Coalition by Matt Jeppsen, Sony has just announced the NEX-VG10 as a first response to HDSLRs which have been used for HD video productions for quite a while already, despite their well known limitations. Fortunately, the NEX-VG10 eliminates several of those HDSLR limitations, while establishing some of its own, with its initial segregated progressive policy. This article will establish the details of these limitations, their workarounds, and the way a professional “big sister” will likely make them unnecessary, although certainly at a higher price.

So far, many producers have used HDSLRs despite the following known limitations, while others have avoided them for some of the same reasons:

With the NEX-VG10, Sony has fortunately eliminated these limitations.

Beautiful Bali captured with the Sony NEX-VG10 Handycam camcorder from SonyElectronics on Vimeo.

Just as has occurred with other segregated video cameras in the past (and others which promised “24p”, but are really 24p-challenged), potential NEX-VG10 purchasers who are located in a 60Hz country -who seek the specific benefits of 23.976p (“24p”) type recording in the camera- will likely be tempted to import a 50Hz version of the NEX-VG10, or to purchase it in their country via a video dealer who imports 50Hz versions and (hopefully) offers an international extended warranty, at least as an option. For in-depth explanations about the benefits of 25p production even in 60Hz countries (when a “24p” type result is desired), see my 2008 article When 25p beats 24p, which also covers the workflow to deliver 23.976p versions from a 25p master. Higher-end cameras from Sony -starting from the EX1(R) and up- already come as universal. Other, lower cost Sony cameras -like the HVR-V1- are segregated, so many users in 60Hz countries with a 23.976p desire would acquire a 50Hz version via unofficial channels. Starting the the 3rd generation professional HDV series, Sony began offering a WorldCam upgrade to make cameras like the HVR-S270, HVR-Z5 and HVR-Z7 to become universal, as I covered in this 2009 article. Sony then offered a similar WorldCam upgrade for the HXR-NX5 (the first of the Sony NXCAM family of cameras), as I covered here.

As I covered back in the When 25p beats 24p article in 2008, here are some reasons why someone might want to shoot normal scenes with a low framerate:

On the other hand, many people may prefer their normal scenes in a medium (29.97p) framerate for a smoother look, or high (50p or 59.94p) framerate, for a smoothest look, although be careful about 50p and 59.94p for your normal scenes if the final program will likely reach an iPad. (See Why the iPad will dictate your shooting framerate.)

When to make the framerate choice

Since Canon’s HDSLRs are not framerate segregated, no matter where you are in the world, you can choose any framerate you please, for any particular shot. With the 7D and T2i, that can be 23.976p, 25p, 29.97p, 50p, or 59.94p. With a 5D at present, it can be any of the first three. So you don’t have to make the framerate choice at time of purchase, just at time of shooting. On the other hand, the NEX-VG10 consumer model (as currently described by Sony, and barring any possible hacks, as have been made for the Panasonic Lumix GH1), you’ll have to make your decision at time of purchase.

What I expect from the pro version

Although at the publication date of this article, I have absolutely no inside information from any of my friends at Sony’s professional division, I do expect the following additional features to be offered in a pro-version of the NEX-VG10:

What I hope from the pro version

Beyond expectations, I hope that the pro version will also offer higher bit recording (lower compression), and the possibility of recording standard H.264 (without the AVCHD structure), as well as the capability of formatting media either in HFS+ or NTFS, so we can finally leave FAT32 in the museum. The raw footage might as well either be a single-file per clip, either .mp4 or .mov.

The term DSLR and HDSLR

I realize that some cameras called DSLR and HDSLR are technically not really what the name states, since many of them don’t use a mechanical mirror system and pentaprism to direct light from the lens to an optical viewfinder on the back of the camera. However, I have found myself forced to use the term, since the term hybrid camera takes too much space in a headline. I hope no one is offended 🙂

Since I know we have an international audience and we are living in the global village (thanks Marshal McLuhan!), I am constantly researching the possible variants among model numbers in the international marketplace. Often, video equipment manufacturers restrict certain functionality in regional versions, and sometimes they use a strict regional warranty system. Sometimes the manufacturers do this to avoid grey marketing (i.e. to encourage purchasing of products in a local region, to protect local distribution), and sometimes it’s to avoid extremely high import tariffs in a specific market. When they do this, the manufacturers often add a regional suffix to the model number.

No manufacturer is paying Allan T©pper or TecnoTur LLC specifically to write this article. Some of the manufacturers listed above have contracted T©pper and/or TecnoTur LLC to carry out consulting and/or translations/localizations/transcreations, and some of them have sent him equipment for evaluations or reviews. So far, none of the manufacturers listed above is/are sponsors of the TecnoTur programs, although they are welcome to do so, and some are, may be (or may have been) sponsors of ProVideo Coalition magazine.