Studio’s Visual Effects Artists, Stereographers, Colorists and Sound Mixers Came Together to Apply the Finishing Touches to the Summer Tentpole

“A tentpole release on this scale really puts the studio to the test, and challenges each group to set the bar higher than ever before – from the teams working on the sound stages to the technicians in the DI suites. To a large extent, The Amazing Spider-Man was created at Sony Pictures from image-capture to answer-print and I’m proud to acknowledge that the excellent work on our lot sets a new standard for creative and technological collaboration,” said Gary Martin, President, Production Administration at Sony Pictures.

“Marc had a specific vision for Spider-Man’s world: an organic, naturalistic New York City, a place full of dirt, scaffolding, and steam. He wanted Spider-Man to be more physical, to really react with this environment, rather than a stylized version of the character,” says Chen. “I loved this concept, but I knew that an organic, naturalistic Spider-Man would make the visual effects work a lot more challenging, because the CG imagery would now demand a higher level of visual sophistication.”

The film’s soundtrack was completed on a dubbing stage at Sony Pictures Studios by re-recording mixers Paul Massey and David Giammarco. Massey and Giammarco have collaborated on a number of films, including 3:10 To Yuma, which brought them a 2008 Academy Award nomination for Best Achievement in Sound Mixing. Sound design and editorial, Foley, ADR and scoring were also completed by Sony Pictures Post Production Services.

At Colorworks, digital intermediate colorists Steve Bowen and John Persichetti led a team that completed final post work and prepared a variety of 2K distribution masters (in 2D and 3D for film, digital cinema and IMAX projection), as well as analogous 4K masters for archival purposes. 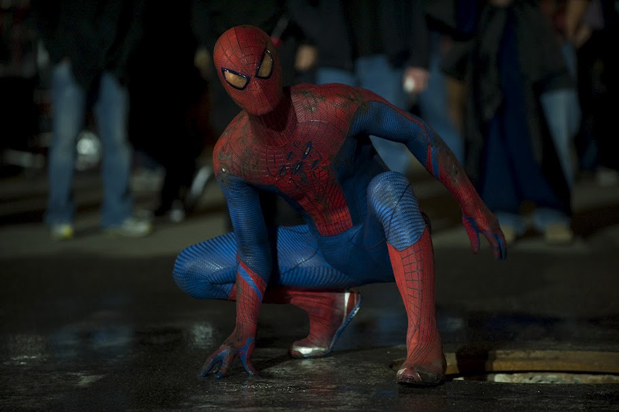 Post production work was facilitated by an innovative digital workflow centering on Sony Pictures Entertainment’s Production Backbone shared storage environment. The Production Backbone, located within the Colorworks facility on the Sony Pictures lot, served as a central repository for original camera source elements and corresponding metadata. The film’s editorial team, Sony Pictures Imageworks and Colorworks shared access to the Backbone and were able to draw data as needed in appropriate file formats.

This workflow allowed editorial, visual effects, color grading and finishing for both 2D and 3D versions of the film to proceed simultaneously. As the editorial team finished cutting 3D sequences, they passed them onto Colorworks for conforming at 2K. Finished visual effects shots arrived from Sony Picture Imageworks and were processed in a similar manner. Conformed scenes then moved to color grading, with 2D and 3D versions graded in parallel in adjoining DI theaters.

In addition to the post-production work done at SPE, The Amazing Spider-Man was shot on eight of Sony Pictures Studios own sound stages, three of which are the biggest in Hollywood.

The Amazing Spider-Man has grossed over $341 million at the worldwide box office in its first week of release.

One of the world’s most popular characters is back on the big screen as a new chapter in the Spider-Man legacy is revealed in The Amazing Spider-Man™. Focusing on an untold story that tells a different side of the Peter Parker story, the new film stars Andrew Garfield, Emma Stone, Rhys Ifans, Denis Leary, Campbell Scott, Irrfan Khan, with Martin Sheen and Sally Field. The film is directed by Marc Webb from a screenplay written by James Vanderbilt and Alvin Sargent and Steve Kloves from a story by James Vanderbilt, based on the Marvel Comic Book by Stan Lee and Steve Ditko. Laura Ziskin, Avi Arad, and Matt Tolmach are producing the film in association with Marvel Entertainment for Columbia Pictures.

The Amazing Spider-Man is the story of Peter Parker (Garfield), an outcast high schooler who was abandoned by his parents as a boy, leaving him to be raised by his Uncle Ben (Sheen) and Aunt May (Field). Like most teenagers, Peter is trying to figure out who he is and how he got to be the person he is today. Peter is also finding his way with his first high school crush, Gwen Stacy (Stone), and together, they struggle with love, commitment, and secrets. As Peter discovers a mysterious briefcase that belonged to his father, he begins a quest to understand his parents’ disappearance – leading him directly to Oscorp and the lab of Dr. Curt Connors (Ifans), his father’s former partner. As Spider-Man is set on a collision course with Connors’ alter-ego, The Lizard, Peter will make life-altering choices to use his powers and shape his destiny to become a hero.