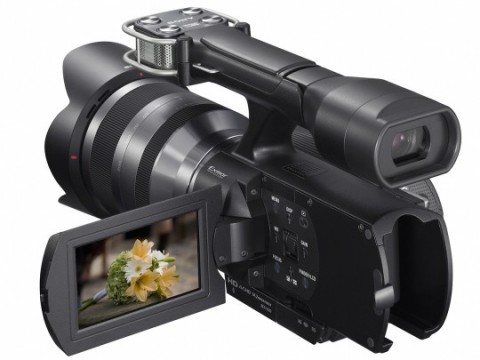 Some time back, we mentioned a Sony teaser about an upcoming HD camcorder model that would feature interchangeable lenses and be compatible with Sony’s line of Alpha lenses. Since then, Sony has showed off a soon-to-ship point and shoot DSLR with similar capabilities, the NEX-5 (and it’s little brother, the NEX-3). I’ve had the opportunity to shoot extensively with pre-production and production versions of the NEX-5, and it’s a sweet little camera, though clearly intended for the consumer space given the lack of professional manual exposure controls. But we expected that from a small point and shoot.

Now, Sony is showing off their new interchangeable lens camcorder, and it’s been dubbed the NEX-VG10. This $2000 camera appears to be their response to the DSLR video revolution, and it’s a very good first step in my opinion. The VG10 features an APS-C sized sensor and has a mount that natively accepts Sony E-mount lenses. E-mount lenses are a new Sony standard that enables autofocus, something that many videographers need and can’t get from the current crop of video DSLRs. And for pro applications, you can add simple Sony mount adapter which allows you to use Sony Alpha lenses on the E-mount. Autofocus will not work via the Alpha mount adapter, however. This adapter greatly broadens your selection of professional glass options, while the stock 18-200mm E-mount lens offers autofocus and optical stabilization. Read on…

Besides the interchangeable lens, the NEX-VG10 features all the typical things you’d expect in a compact handycam. Proper on-camera mic, proper audio headphone monitoring and external mic inputs, an LCD and button layout that videographers will understand, and of course a form factor that lends itself to handheld shooting. Storage is on SD and MemoryStick media via a single slot, and the video codec is AVCHD at 24Mbps. It is a 1920×1080 full-raster image, as you might expect. Modes include 1920×1080 @ 60i, and bitrates offered are FX @24Mbps and FH @17Mbps. There is also a 1440×1080 @60i mode at 9Mbps. No word on 24p, unfortunately. It seems Sony is leaving it out of this model. But you should note that the 60i material originates from a progressive sensor, and images do not appear to show any tearing or interlace artifacting. This is similar to how the NEX-5 works…it’s video mode offers 60i as well, but it looks progressive on your NLE timeline. Another quick note: I also have it on good authority from a Sony contact that the mini-HDMI port output is pre-compression, so you also have the option of uncompressed recording when tethered to a card or capture device.

The NEX-VG10 also features a few things you wouldn’t expect in a camcorder. For starters, this camera has a 14.6 MP photo mode, which is a very interesting high-quality option for a camcorder body. For the photo side of things you’ve got anti-motion and auto-HDR modes. There’s also two accessory shoes on the top handle; the first is a cold shoe for standard accessories and the second is a hotshoe that can accept a pro Sony photo flash. It’s the an odd sight, seeing a tall photo strobe sitting on top of this svelte little camcorder. 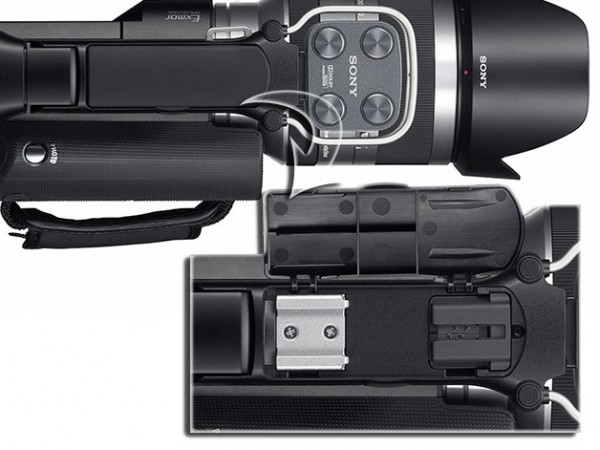 I had a chance to shoot with a pre-production VG10 recently, and one of the first things that struck me when handling this camera, was how small the body was in relation to the lens. This thing is incredibly compact. That can be either a pro or a con, depending on how you tend to shoot and what your application is. But clearly this will be Sony’s flagship consumer/prosumer camcorder, I would not have expected them to release a full-size camcorder body at first blush.

Opinion alert: I fully expect there to be another camcorder model announced (I’d guess by the end of the year) that will compete more in the HVX200 and XDCAM EX1 size/featureset market. And given all the right notes they have hit with their first entry into the DSLR-video-camcorder space, I am very excited to see what they have next for us. So if the NEX-VG10 isn’t your cup of tea, I personally don’t think you’ll have long to wait for more options.

Back in May I wrote an article about who will be the first to deliver all the right tools and features in a camcorder body, all the features that DSLR video users are clamoring for. The VG10 isn’t 100% there, but I’m still hedging my bets that Sony will get the cheese.

If you’d like a closer look at the NEX-VG10, click through to the next page for a hands on video from Charles Michel, as well as footage from the camera. The audio appears to be German, but there’s some good shots of the camera and a good sense of it’s size and heft. I’ve also included a promo video from Sony Australia that shows off footage and the camera in use. Check it out on Page 2…

Sony Australia has also released an info/promo video that shows the camera in use and footage examples:

UPDATE: Another VG10 footage example video posted, this one from Bali.

Beautiful Bali captured with the Sony NEX-VG10 Handycam camcorder from SonyElectronics on Vimeo.