A test shoot seeks some answers.

I cut my teeth on film, before the camcorder era. At that time, swapping lenses on 16mm and 35mm motion picture cameras was commonplace. Perhaps that’s why I still think in terms of both prime lenses and zoom lenses.

2/3-in. camcorders always had bayonet lens mounts too, but until the arrival of HDCAM in the late 1990s, fixed focal length or “prime” lenses were rarely used on them. That’s because Betacams, introduced in the early 1980s, were designed for electronic newsgathering. Zoom lenses with high zoom ratios and 2x extenders seemed adequate for ENG. And adequate was good enough back then.

I cut my teeth on film, before the camcorder era. At that time, swapping lenses on 16mm and 35mm motion picture cameras was commonplace. Perhaps that’s why I still think in terms of both prime lenses and zoom lenses.

2/3-in. camcorders always had bayonet lens mounts too, but until the arrival of HDCAM in the late 1990s, fixed focal length or “prime” lenses were rarely used on them. That’s because Betacams, introduced in the early 1980s, were designed for electronic newsgathering. Zoom lenses with high zoom ratios and 2x extenders seemed adequate for ENG. And adequate was good enough back then.

But limiting your camera to a single lens, no matter how variable in focal length, is out-of-step with 170 years of photographic technique. Excluding point-and-shoots, virtually all cameras from the past two centuries have exploited the opportunities and advantages of interchangeable lenses.

Primes, for instance, are lighter, smaller, and cheaper than zooms. They employ fewer optical elements and tend to produce better contrast and corner resolution with less aberration and veiling glare. Cam-driven mechanisms needed to shift lens groups in zooms, which invite wear and require pricey maintenance, are of no concern. Moreover primes can be specialized: fisheye, macro, telephoto, and tilt/shift for perspective control.

Primes also confer an invaluable side-benefit: when using an assortment of lenses, you learn nuances of optics and photographic technique.

But what if, in a cin©ma v©rit© circumstance, you needed a zoom with a wider angle? In 16mm days, we carried a wider Angenieux 9.5-57mm alongside a standard Angenieux 12-120mm in our lens kit.

Or needed a fisheye perspective, which no zoom can provide? In 16mm days, we approximated a fisheye look with a Kinoptik 5.7mm prime, also in our kit.

In other words, same camera-whichever 16mm model it was-but right tool for the right job.

Now, unless you’ve been living under a rock, you know that large-sensor cameras like the Sony F35, ARRI D-21, and RED ONE have ignited new interest in PL-mount prime lenses. Small-sensor cameras, too, have borrowed this look with the help of popular lens adapters from P+S Technik, Redrock Micro, Letus, and MOVIEtube.

And HDSLRs have burst upon the scene like gangbusters. 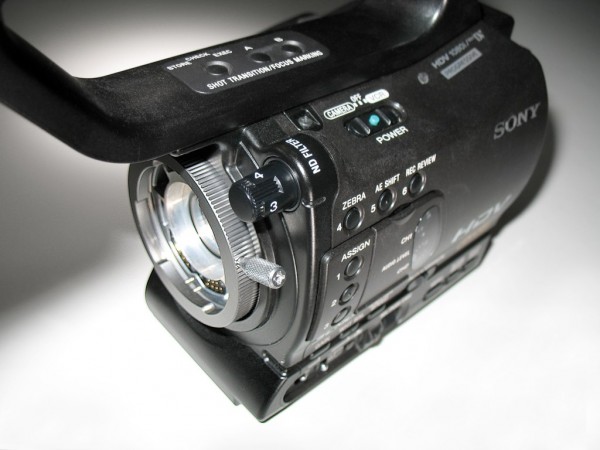 Sony HVR-Z7U with 1/3-in. bayonet lens mount, almost too compact for its own handle.

In the same way that 16mm cameras coexist with 35mm, small-sensor camcorders will remain popular in the era of large-sensor HD cameras. Large-sensor cameras, after all, can’t satisfy every need. Razor-thin depth-of-field will hold limited appeal to news gatherers, makers of hand-held documentaries, those who film critters in nature-anyone shooting action in unpredictable circumstances.

Which brings us to the only compact hand-held camcorder that offers interchangeable lenses, Sony’s HVR-Z7U, introduced in late 2007 and reviewed in many places including here by this writer. The “Z7” joined the versatility of a 1/3-in. bayonet mount to the economy of HDV, the resolution of native progressive recording, and the unprecedented choice of recording to MiniDV tape or Compact Flash or both.

Echoing the days of 16mm, Sony provided not one but two zooms for the Z7. The longer one, a Zeiss 12x, 4.4-52.8mm, f/1.6, is supplied with the Z7. The wider-angled one, a Zeiss Vario-Sonnar 8x, 3.3-26.4mm, f/1.6, is available as an accessory. Both feature optical image stabilization and “hybrid” designs that switch from electronic autofocus (endlessly spinning focus ring) to a quasi-mechanical manual-focus mode. I use both zooms regularly, like in the old days.

But what particularly intrigued me and many others about the Z7 is that Sony also introduced an adapter ring with corrective optics for use with inexpensive lenses from Sony’s DSLR Alpha camera line (fruit of Sony’s absorption of Konica-Minolta). Third party adapters appeared too, notably a Nikon-to-Z7 adapter. 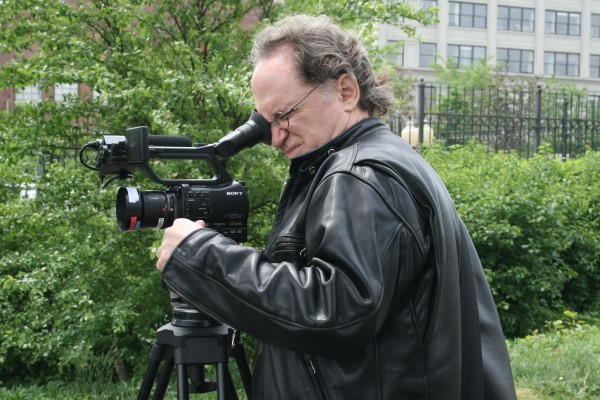 Besides an entire universe of new lens choices, two really cool things stand out about using DSLR lenses on a Z7. First of all, compared to the horizontal angle-of-view they’re meant to provide on a full-frame DSLR, the angle-of-view of a DSLR lens on a 1/3-in. sensor camera like the Z7 is seven times narrower-transforming every DSLR lens into something of a telephoto.

Secondly, for any given focal length, the effective iris diameter of a DSLR lens will be larger than the same f-stop on a lens designed to be used on a 1/3-in camera. If this seems to fly in the face of the very definition of f-stop (ratio of the diameter of the image pupil divided by focal length), that’s due to intricacies of the retrofocus design embodied in compact 1/3-in. zooms, coupled with the fact that DSLR lenses are optically simpler. Also note that DSLR lenses tend to be longer in focal length to begin with.

The upshot is that you can stop down a DSLR lens on a Z7 to f/8 or even f/11-something you would never do with a 1/3-in. zoom because of the softness penalty imposed by diffraction. And the good news is that stopping down a DSLR lens reduces aberrations and improves sharpness and contrast-beneficial when used with a 1/3-in. camera like the Z7, for which any DSLR lens is not designed in the first place. 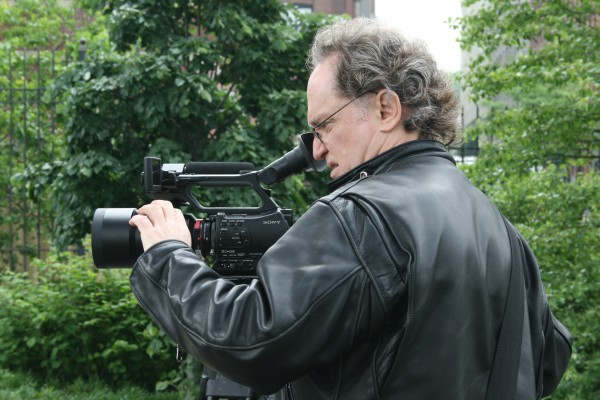 Since the Sony Alpha 50mm is a close match to the 52.8mm long end of the Zeiss zoom, comparisons of optical quality are easily discerned.

In the course of shooting these tests, I was struck by several realizations. The Z7, already small and compact, felt downright bantamweight with the small Alpha 50mm lens attached.

A tripod was necessary when using Alpha lenses, since I hadn’t rigged a handgrip.

The Zelss Sonnar 135mm functioned as an extreme telephoto, with compressed depth that always looks cinematic. Finding or pulling focus was facilitated by the Z7’s clear, smooth-looking LCOS viewfinder. To demonstrate while testing the 135mm, I pulled focus myself of the small bird foraging in the grass.

The following clips, about five minute’s worth, are clearly labeled. Atmospheric conditions are mentioned because the day began hazy and low in contrast. The sun eventually came out, but in telephoto shots of New York’s busy waterfront you can clearly see lingering haze. In other words, the flat contrast is not due to the Sonnar 135mm.

Look again at the first series of shots, featuring the intrepid Plein-Air painter, if you don’t see him in the wide shots taken at 4.4mm. He’s there.

Wild sound only exists on the sound track. There is no voice-over.

These clips were shown last September at DV Expo in Pasadena and in January at Sundance 2010.