Sony has potentially fulfilled the impossible dream for video people who long for a huge sensor and interchangeable lenses, but also demand their electric zoom. 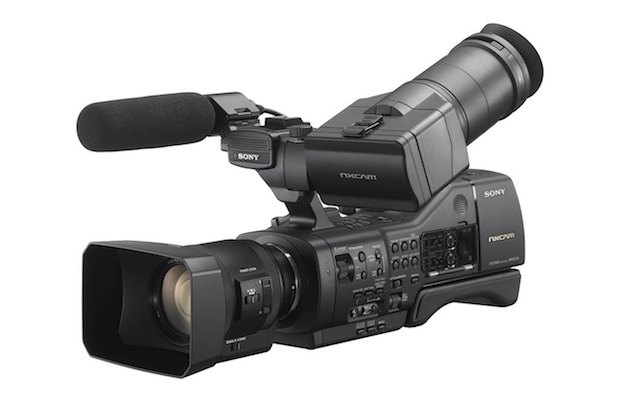 I know some videographers (especially those with a “video” background, as opposed to a “cinema” background) who have longed for a camera with a very large sensor and interchangeable lens capability, but up until now have rejected current models because they demand electric zoom capability, which hasn’t been available with such cameras. Potentially, Sony has just satisfied them with the US$4200 NEX-EA50 camera. The first package/kit to be offered is a WorldCam model which includes an 18–200mm servo zoom lens, microphone, and other accessories. Although it comes with the mentioned servo zoom, you can remove it, mount a prime lens, and be able to zoom electronically without degrading the image. Learn how, and see footage ahead.

How can the NEX-EA50 zoom through a prime lens, losslessly?

UPDATE on the NEX-EA50’s digital zoom

Sony has contacted me to confirm that the digital zoom is 2x, so (as in their example) a 50mm prime lens becomes a 50–100mm zoom with a fixed aperture. The maximum zoom magnification is 2x (16 megapixels to 8 megapixels) in order to assure no quality loss.

With zoom lenses used the traditional way, the aperture tends to decrease progressively as the zoom reaches the telephoto extreme, with a corresponding light loss. Obviously the digital zoom does not lose any light, so the digital zoom is a good feature even with zoom lenses (leaving them at any specific focal length). The zoom rocker can be assigned either to be a digital zoom or a servo zoom at the operator’s discretion.

This lossless digital zoom feature is to complement or augment the 18–200mm f/3.5–6.3 servo zoom lens (model SELP18200) that comes included with the initial kit, which is the NEX-EA50UH in the USA, NEX-EA50H in Latin America, or the NEX-EA50EH in Europe. Despite the regional differences, they are all fortunately WorldCam 🙂

The NEX-EA50 accepts Sony E mount lenses, or many other brands of prime or zoom lenses via an inexpensive mounting adapter. Many of such lenses are shown in the video below.

Long live WorldCam! The recording formats of the NEX-EA50

The NEX-EA50 is a WorldCam. In HD it records in AVCHD 2.0 format. In SD it records MPEG2 PS (program stream). When in 59.94 Hz mode, it operates in and records in any of the following NTSC-derived formats:

When you set it to 50 Hz mode, the NEX-EA50 operates and records in any of the following PAL-derived formats:

The NEX-EA50 can record onto any of the following media:

Simultaneous recording to the memory card and FMU128 is possible. Unlike some other NXCAM models, the NEX-EA50 apparently does not have any internal recording capacity.

The NEX-EA50 can also shoot still photos up to 16 megapixels. Considering that I don’t see aliasing in the sample videos, I suspect that the low pass filter must be via software in the cameras DSP (digital signal processor), not optical, to allow for it to shoot such high-resolution stills without aliasing in the video.

First, I’d like to say that even though it’s 4:2:0, AVCHD has come a long way, both due to the higher bit rates and the latest generation H.264 encoders. However, if you have an application that requires making a 4:2:2 recording (or potentially even a 4:4:4 recording) from the NEX-EA50, see my upcoming article: Record 4:2:2 progressive or beyond from your HDMI camera with an external recorder.

Copyright and use of this article
The articles contained in the TecnoTur channel in ProVideo Coalition magazine are copyright Allan T©pper/TecnoTur LLC, except where otherwise attributed. Unauthorized use is prohibited without prior approval, except for short quotes which link back to this page, which are encouraged!