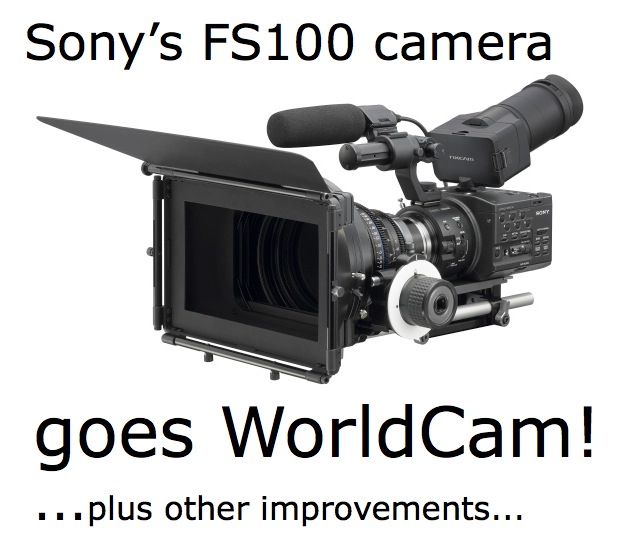 Sony USA has just officially announced that the (so-far) segregated 59.94Hz FS100 camera (officially known as the NEX-FS100, often followed by a regional suffix, and then sometimes by the letter “K” to indicate that it is a kit, packaged with a lens) is about to go “WorldCam” via a free firmware update sometime at the beginning of 2012. “WorldCam” is a term used to indicate that a camera has the necessary framerates to be used worldwide, similar to an unlocked quad-band GSM phone that I have used for more than a decade to travel internationally without roaming charges. Beyond using a camera worldwide, having a WorldCam camera is also helpful when a producer needs to acquire content to be broadcast primarily in another country which uses a different framerate. This article will cover the novelistic history of the FS100’s uncertain potential capacity to become WorldCam, as well as some other improvements included in the upcoming firmware update… and some other improvements that are still missing.

In the recent past, higher-priced Sony HD professional cameras including the HDCAM, HDCAM-SR, XDCAM-EX, and XDCAM-HD lines have all been shipped WorldCam as standard. The third generation professional Sony HDV cameras were shipped as segregated, but were optionally upgradable to WorldCam for US$300 in the USA, as I covered back in 2009 in Sony upgrades 3G HDV camcorders to universal, for a small fee. As explained in my 2008 article When 25p beats 24p, because of the fact that the 23.976p workflow was so cumbersome back in the HDV tape days, some USA producers chose to produce in 25p and then deliver 23.976p. Fortunately, most of the problems associated with 23.976p workflows have disappeared with the arrival of cameras that shoot 23.976p natively (without pulldown) onto solid state media. However, there is still a need for WorldCam cameras for international shoots, as I covered in Panasonic AF100 joins forces with Sony encoder for 25p Euro spot in Miami. In that June 2011 article, director Rub©n Abruña explained why he chose the Panasonic AF100 over the Sony FS100 for that production: 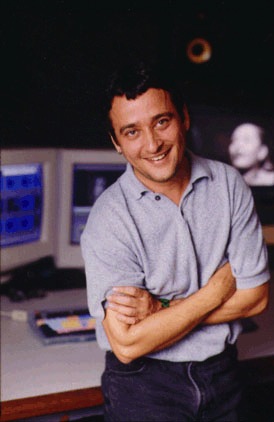 “The two candidates were the Panasonic AF100 and the Sony FS100. Obviously, the Sony FS100’s Super35mm sensor is mathematically more appropriate and more efficient for 16:9 capture than the Micro Four Thirds sensor in the Panasonic AF100. I would have really loved to have been able to compare them side-by side, but Sony made the decision for us because the FS100 simply wasn’t available on time for this production. So we used the Panasonic AF100, which fortunately comes standard as ‘WorldCam’. But ironically, Sony was involved in many of the scenes, by virtue of the fact that we recorded many of them on the nanoFlash recorder from Convergent Design, which uses a ‘Beyond XDCAM-HD’ encoder manufactured by Sony. I call it ‘Beyond XDCAM-HD’ because it has the same 4:2:2 encoder technology used in cameras like the US$42,000 Sony PDW-F800 camera, but fortunately breaks the 50 megabit/second limitation of the F800 and allowed us to record 4:2:2 at 140 megabits/second. I am very happy with the motion pictures we’ve been able to create with the AF100 together with the ‘Beyond XDCAM-HD’ Sony encoder in the nanoFlash recorder. Having said that, I will strongly consider the FS100 for future projects, but only when Sony can offer a WorldCam version of it. The fact that we produced this spot in 25p in Miami for Europe should make it clear that production today is global, and Sony shouldn’t expect us to purchase two separate camera bodies just to cover 50Hz and 59.94Hz framerates.”

Apparently, Sony read Rub©n’s explanation here in ProVideo Coalition magazine, and likely that of many other concerned producers and directors. Just prior to that, Adam Wilt had reported from CineGear:

According to Sony’s Juan Martínez at Cine Gear, the FS100U (US model) is not upgradeable to WorldCam 50/60Hz compatibility; the hardware won’t support it. To shoot 50 Hz formats, you’ll need the FS100E (European) model instead.

Almost immediately after that, I received word from a very trusted CI (confidential informant) that I should set the FS100 (and even the NX70) WorldCam status back to “Unconfirmed” until further notice, which I did in Untapped features in Sony NXCAM’s new HDMI output back in June 2011. Now, perhaps as a December holiday present from Sony, we just heard the good news about the upcoming free firmware upgrade for the FS100 which makes it WorldCam, among some other improvements:

Listed features and specifications may change before the actual upgrade release.

Pending improvements for the FS100 not yet announced by Sony

See my recent Open letter to professional AVCHD manufacturers, since none of those requests have yet been announced by Sony (or by Canon or Panasonic).