The 1″ sensor delivers both great color and bokeh

In the video below, you can see the 120fps out of the Sony Z150. I did not have a tripod with me when I shot the footage at the blueberry farm but the image stabilizer and 120fps helped me capture what I was seeking. Looking at this video now I can see the mid-day sun on a Tennessee summer can be pretty unforgivable.

This camera and lens are built around a 1″ Exmor RS Sensor. Instead of the S35mm sized sensors found in Sony’s CineAlta line: F55, F5, FS7, and FS5. Where those cameras excel is their ability to have a wide dynamic range and great color rendition. The Sony Z150 takes some of these cues but lacks the processing power to compete with the more expensive cinema cameras Sony has to offer to shooters.

One of the first things separating the Z150 from the FS5, FS7, F5, and F55 is the S-Log gamma curve. S-Log is Sony’s logarithmic curve helping cameras like the F5 capture video with great tonal reproduction in both the low-light and high-light region of an image. The Z150 can produce great colors but the smaller camera is not going to retain the dynamic range of an F55. If it did, the sony Z150 would be one helluva a great deal. The Z150’s color has more of a video look than the F5 and FS7. Obviously, this is more of a TV video camera than a digital cinema camera, but the Z150 is no slouch either. The camera can record 4:2:2 10-bit color for HD and 4:2:0 8-bit color for 4K.

The Z150 has a solid advantage over other many single-lens camcorders is the larger 1″ chip and the depth of field one can capture with it. The entire world will not be stuck in focus with the Z150. While you will not be seeing rail thin shallow depth of field like you would be capable of capturing with the full-frame DSLR you can see some of it. Maybe just an ounce, but I’ll take whatever bokeh a single-lens camcorder can give me.

I’d love more range between the highlights and lowlights but what the Z150 has is more than adequate. One thing I noticed when shooting city-scapes was the ability to bring the bright highlights, thought not the peaked pixels, back into a suitable range when color grading in DaVinci Resolve. Yet, you have to be careful. If the video signal peaks totally then those pixels are gone and so is your detail and color. When shooting the blueberry picking the harsh Tennessee afternoon sunlight did not do me many favors with the dynamic range on the Z150. If I were you I’d find a way to keep your scene’s extreme highlights in check. Or, do what I should have done and wait until later in the day when the light may have been slightly less harsh. 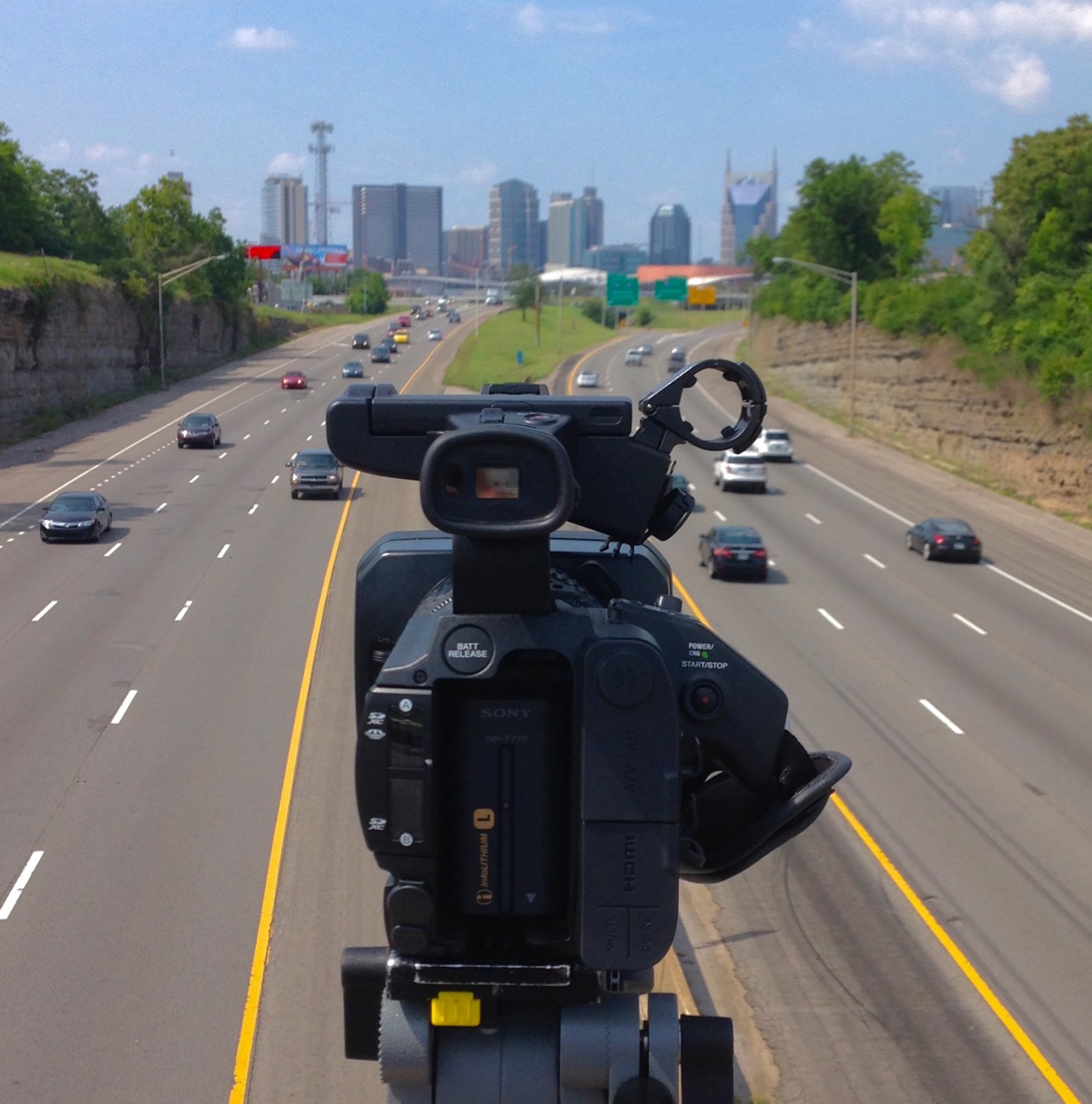 I was really surprised by the 4K out of this camera. The 4K footage had the sharpness and clarity one expects from a 4K camera without too much aliasing or moire. The color in the 4K image did not feel like 8-bit color files. In the shoots I had with the Z150 I felt like it had the capability to impress and have others thinking the footage came out of a more expensive camera.  The only drawback to the Sony Z150 and its 4K is you can only record 4K up to 29.97. There are no high frame rates in 4K. Frame rates higher than 29.97 you will need to drop the resolution down to HD.

In order to shoot 120fps in HD, on many cameras, you usually have to surrender something. You might need to give up resolution or sensor size, many cameras window to achieve 120fsp, or you may need to drop down the Mb/s. With the Sony Z150, I felt like the footage came out as well as the rest of HD footage the camera was capturing. There was not much of a discernable loss in the picture to capture 120fps. In the edit, during color correction, I could tell the footage was reacting more like 8-bit color files than 10-bit.

Matching the Z150 & Other Cameras

With a little lite color massaging the 4K out of the Sony Z150 matched remarkably well with Blackmagic’s 4.6K URSA Mini. In the promo spot example, I shot 4.6K raw for the stand ups or 4K Apple ProRes HQ for the traffic footage. Side note, I needed the extra dynamic range out of the 4.6K URSA Mini raw for the stand up of my anchor because I was flying solo on that shoot. Personally, I think many would be hard pressed to see a huge different in the final result. Mind you, the 4.6K raw footage out of the Blackmagic URSA Mini was de-Bayered in Resolve at a 1080 HD resolution meaning I did not edit everything in 4K. Plus, the Sony Z150 footage was color graded in 4K and then sent to After Effects for removing the traffic. When I exported out of After Effects I exported HD and not 4K. 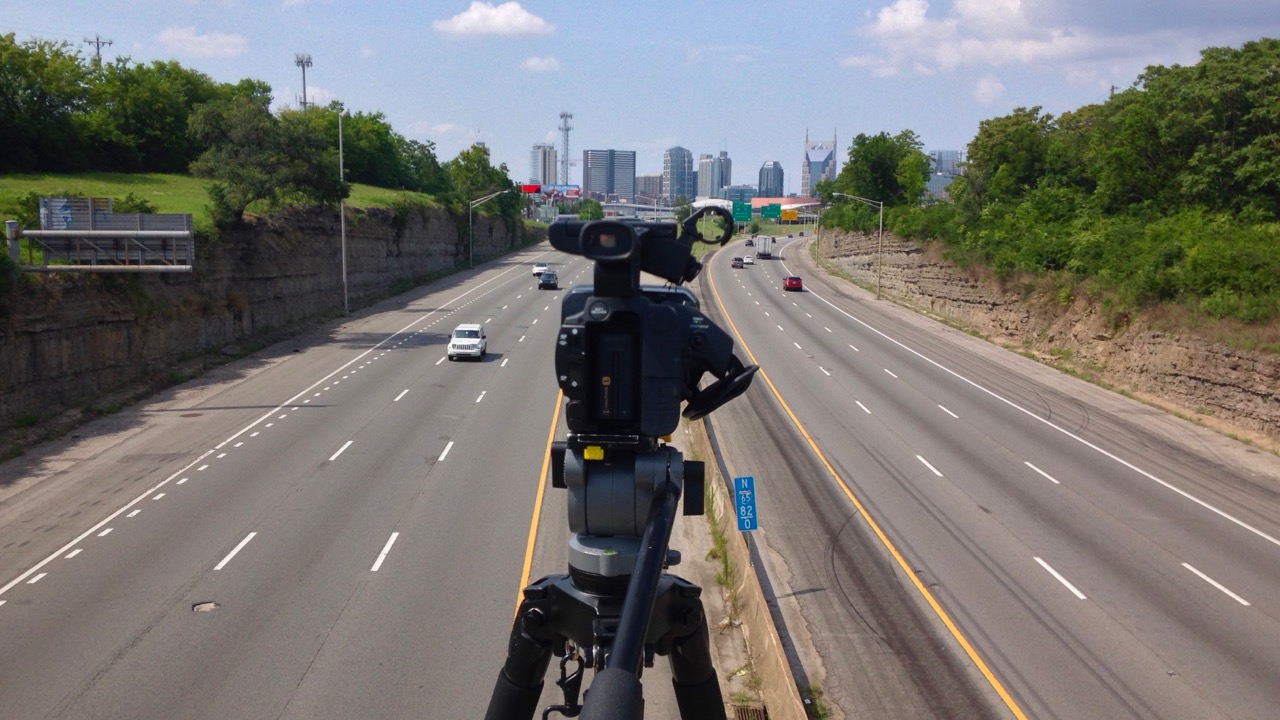 Not everyone needs a DSLR, a Panasonic Varicam, or a Sony FS7. Some people need one camera to do most of the work they face. They may want to keep it simple and they may want it to be easy to use with a good picture. And, there is absolutely nothing wrong with any of these things. They could hardly pick a better camera in the Sony Z150.

Who will make the best use of this camera? Broadcast journalists? Trust me when I say I’ve met many a photog/producer who knew little about their camera and was only interested in it working. I see field reporters, broadcast producers, and news photographers in a smaller market making use of the Sony Z150. I can see Indie documentary filmmakers and anyone needing an inexpensive single-lens 4K camera makes great use out of this camera.

The Sony Z150 only has these outputs: SDI, A/V, and HDMI. It’s an enough for most applications, like a news Live Shot, but a camera with no genlock means this camera probably should not be used with other cameras and a switcher.

Sony’s Variable ND Filter Wheel *** is not on this camera***

*** I thought I used*** the Variable ND on the Z150, which would be impossible. The Z150 does not have Sony’s awesome Variable ND Filter wheel. It should have it. My memory said it had it, but it does not. Nope, the Sony Z150 has the standard four setting switch: clear, 1/4ND, 1/16ND and 1/64ND. I am so used to shooting fast and hitting the ND when needed that I barely noticed the lack of a Variable ND Filter wheel, which is a great feature, but it is not on the Z150. I clearly have reviewed too many single-lens cameras and they’re all starting to blend together. My mistake and I hope I have not led anyone astray. Thanks for a reader’s catch and comment. I owe you one.

The Monitor and EVF 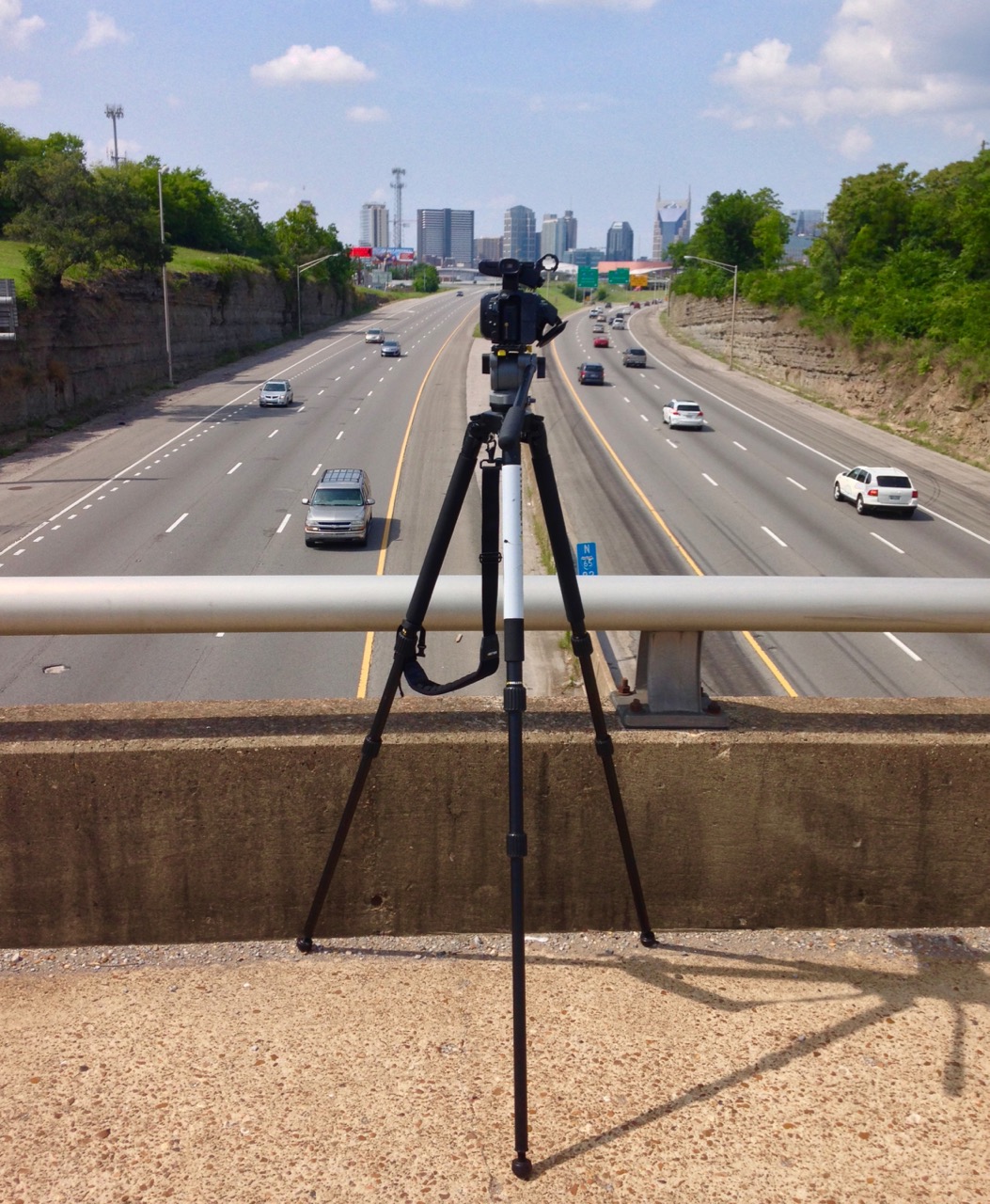 The monitor could be brighter when shooting in bright sunlight, but that’s why they added an EVF. The EVF is just good enough to get you through the brightest day but is no way a complete replacement of the much better monitor. Plus, I love how the screen can be folded away when not in use. The plastic body of the camera makes the Monitor feel like it might be damaged one day so being able to fold it out of harm’s way is a solid decision by Sony. The color and contrast found in the monitor seem to match what the camera recorded. The sensor for switching between the Monitor and EVF can be turned off. The sensitivity of the sensor can be adjusted as well. This is a good thing if you’re holding the camera and your body continues to trigger the EVF on and turning off the Monitor. Take the time to find these adjustments otherwise, you might have a very frustrating shoot where you end up holding the camera in an awkward way to make sure you can see the monitor while simultaneously not accidently turning it off.  I did such a thing before I found the menu to change the setting.

I do not understand the engineering behind Sony’s Clear Image Zoom but it is so much better than the digital zooms of the old days. When they state “Clear Image Zoom” they mean clear image. I think anyone covering news or shooting a documentary will make great use of the long lens throw and the digital extension of it.

The Shape and Size

If you decide to go with the Sony Z150 know you are buying into a very solid camera system. Sony makes stellar sensors and the one found in the Z150 is no exception. The 4K can look stunning and the 120 frames per second can deliver butter slow-motion footage. While the dynamic range is not near the 15 stops found in many cinema cameras it is respectable. There are so many of Sony’s smart engineering elements found in the Z150 a shooter would have to be a complete sourpuss to not come away with a positive shooting experience. This camera may never be of the caliber of the F5 or F55, but it can hold its own in the broadcasting world or the documentary world. Personally, I look forward to seeing what others create with the Z150. 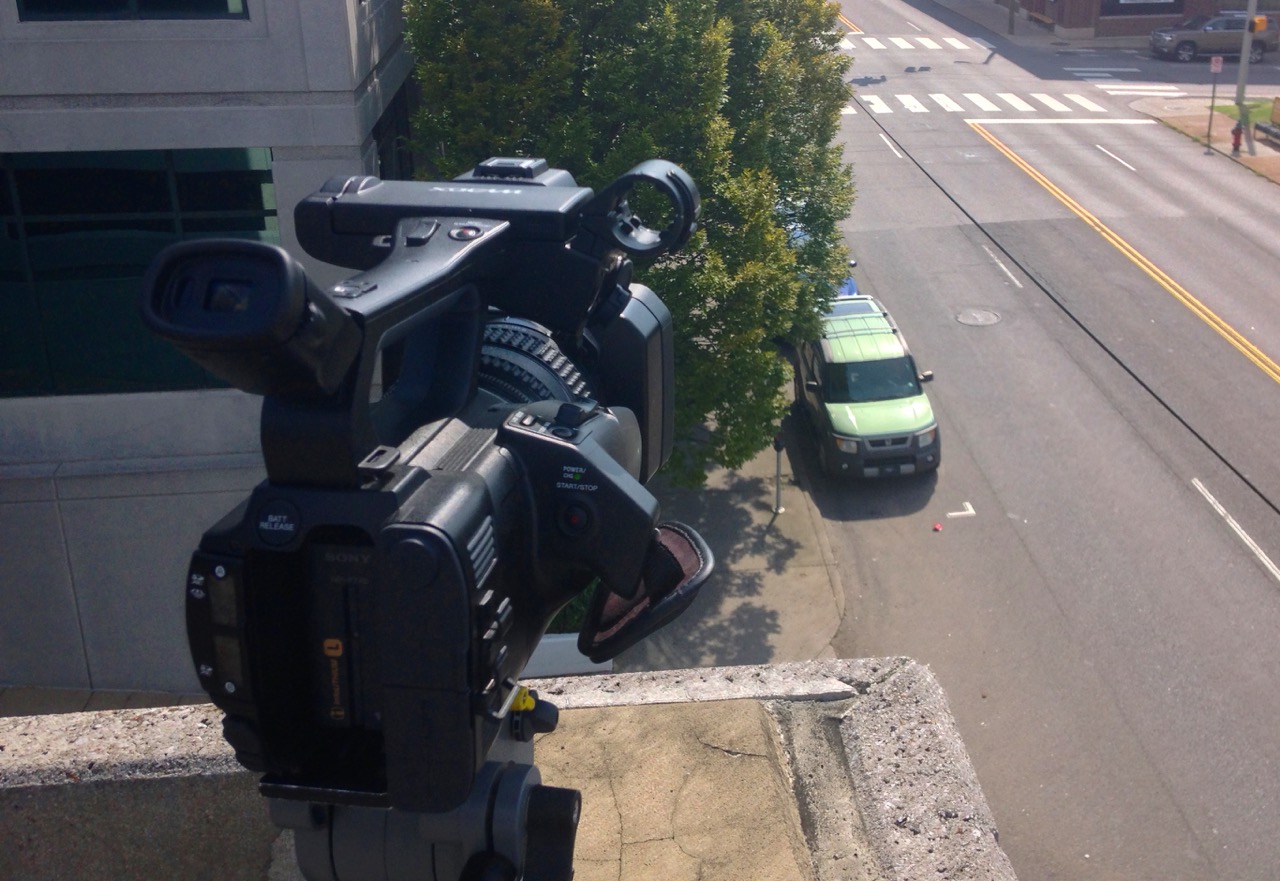