Designed for commercial applications including education, corporate, large venue and entertainment, the new models expand Sony’s laser-based professional projector family to a total of nine, starting at 2,000 lumens and going up to 7,000 lumens, in WXGA, WUXGA and 4K resolutions.

“4000 to 7000 lumens is really the sweet spot of the installation category for higher education, corporate, and integration projects, and that’s where these models are targeted,” said Wally Mohri, marketing manager for business projectors at Sony Electronics. “The addition of the WXGA line to our WUXGA series expands the applications that can benefit from the combination of high quality, long laser life, low maintenance and flexible AV integration capabilities.”

The new projectors share many features with the existing models in Sony’s line. Each uses BrightEra® panel technology to reproduce natural-looking and vivid colors.

The new models are designed to deliver enhanced picture quality with features such as “Reality Creation,” a technology already in use by Sony’s home theater projection systems for high-end consumer entertainment. The Reality Creation engine analyzes and processes every input signal to refine detail, clarity and sharpness for naturally up-scaled images. This provides higher-resolution perspective, even with the lower-resolution WXGA series.

Sony’s laser light source means there’s no lamp that needs to slowly warm up or cool down, no lamp to limit tilt angle and no trade-off between high brightness and high resolution. The laser projectors are designed for up to 20,000 hours of maintenance-free operation, depending on the usage environment, which contributes to reducing users’ total cost of ownership.

In addition to the long-life laser light source design, the projectors are designed for energy efficiency due to the 3LCD engine. The VPL-FHZ57 operates at 370W power, making it the most energy-efficient laser light source projector. The low power consumption also reduces heat dissipation, in turn lowering fan noise. The VPL-FHZ57 laser projector has the quietest operation in its class (32dB, 28dB at Standard Brightness mode).

The new models have a wide powered lens shift, which can help in challenging installation environments, for example maintaining audiences’ site lines by installing the projector above a screen, or horizontally avoiding HVAC ducts on the ceiling.

The new models can be combined with a variety of optional lenses, including a short throw and tele-zoom covering up to 4.84:1 throw range, and they use a bayonet lens mounting system for easier and quicker lens changes.

Sony’s newest lens option is the VPLL-3003 ultra-short throw lens, the first interchangeable ultra-short throw lens for 3LCD projectors. This lens offers sharp focus and minimized picture distortion due to a large mirror system, and easy adjustment of lens shift and focus via remote control. Its 0.33:1 throw ratio allows it to be used in tight spaces with no clearance from the wall.

The new models all have built-in HDBaseTTM interfaces, enabling easier connectivity and reducing total system costs by using a single cable which runs all the video, audio, control and IP signal up to 328 feet (100m). 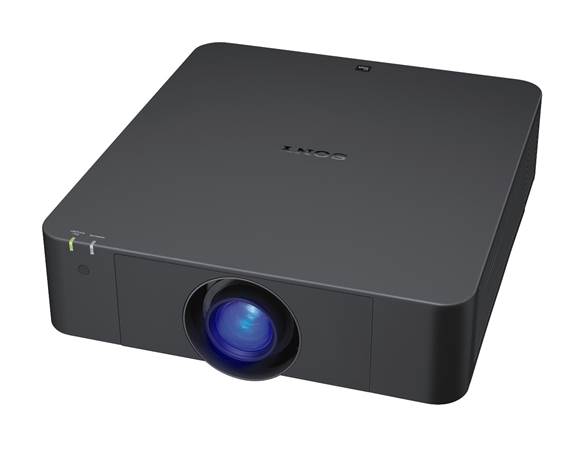 The following is planned availability for the new Sony projectors: