Remote operation can be a critical need on some shoots

Sometimes you cannot get a camera and a camera operator in the right position to get the shot. For an undefined number of reasons sometimes a production has some sort of limitation. For example, in the Oscar-nominated documentary “Free Solo” the filmmakers Jimmy Chin and Chai Vasarhelyi, who shared their experiences shooting “Free Solo” in this ART OF THE SHOT, decided at critical moments during Alex Honnold’s epic athletic climb of El Captian it would be better to use remote cameras so Alex could navigate the most difficult parts of  El Captian without the distraction from a human camera operator present. Clearly, in this case, an important decision was made for the safety of Alex during his ascent and was a benefit of all involved. Here is a very quick look at some terrible video.

Sometimes the presence of a camera operator is impossible to be able to truthfully capture a moment. Hell, we all have seen Reality TV shows like “Big Brother” where production made extensive use of remote cameras to capture the ensuing drama of reality show contestant dynamics and it’s “realness.” Not that Reality TV is real and a true depiction of life.

Recently, Sony sent me two for their latest Pan/Tilt/Zoom (PTZ) Remote Cameras, the BRC-X1000 and the BRC-H900 along with Sony RM-IP500/1 Professional Remote Controller. I took the time to take these two cameras for a spin to learn how easy the PTZ cameras are to operate for first-time users and seasoned professionals.  My subject? My 20-month old daughter Avedon. You might think this is kind of silly, but if you are a parent then you may know how difficult it can be to capture your child playing without them becoming distracted by your presence or your camera’s presence. Needless to say, my daughter knows most cameras can play back video so she runs toward cameras and the operator to watch the video on the LCD screen.

Ease of Set up

I’ve been around PTZ cameras, I have operated PTZ cameras, however, I am not a broadcast engineer. I know enough to bumble forth on my own, which is exactly what I did for this review. I set up both cameras one at a time. I started with the Sony BRC-X1000 4K PTZ camera because why not. Within a small window of time, I was able to mostly understand the ins and outs of the BRC-X1000 so I pressed it into action shooting the high drama video of my daughter playing with her tea set in her pink tent-castle. Hey, Tea Party Rules in this household. I used my Blackmagic Design Video Assist 4K monitor/recorder to see the video signal and to record my footage. FYI, both cameras are just cameras without an ability to record the video.

I feel like one should take the time to dive into a camera before a big shoot. Take the time to learn the tool before you use it like I did while shooting video of my daughter. With these Sony PTZ cameras, I will go a little further and suggest users should take a moment or two to read the instructions if you haven’t used a PTZ camera before. Yea, yea, I know many of you might sneer at a suggestion to read directions but they can ease your frustrations when learning a new camera.

On a basic level, I was able to capture what I wanted pretty quickly. It was when I wanted to veer off the standard video shoot did I head into a jungle of settings best learned in a safe test like this one. After a bit of time on both cameras, the jungle of settings and features had been trimmed into a garden of options to be explored and used. Yes, these PTZ cameras, like all PTZ cameras can seem complex and robotic. Do not let the fear of an all-seeing terminator eyed style body put you off. These cameras are meant to be used by humans meaning they are not too complex at their heart.  Just remember each PTZ camera’s settings are deep and hidden behind a menu. The better you understand a camera’s menu and settings before you go out and shoot the better experience you’ll have overall. If you spend a day getting to know and test these cameras then you should be all good to go for a simple shoot. 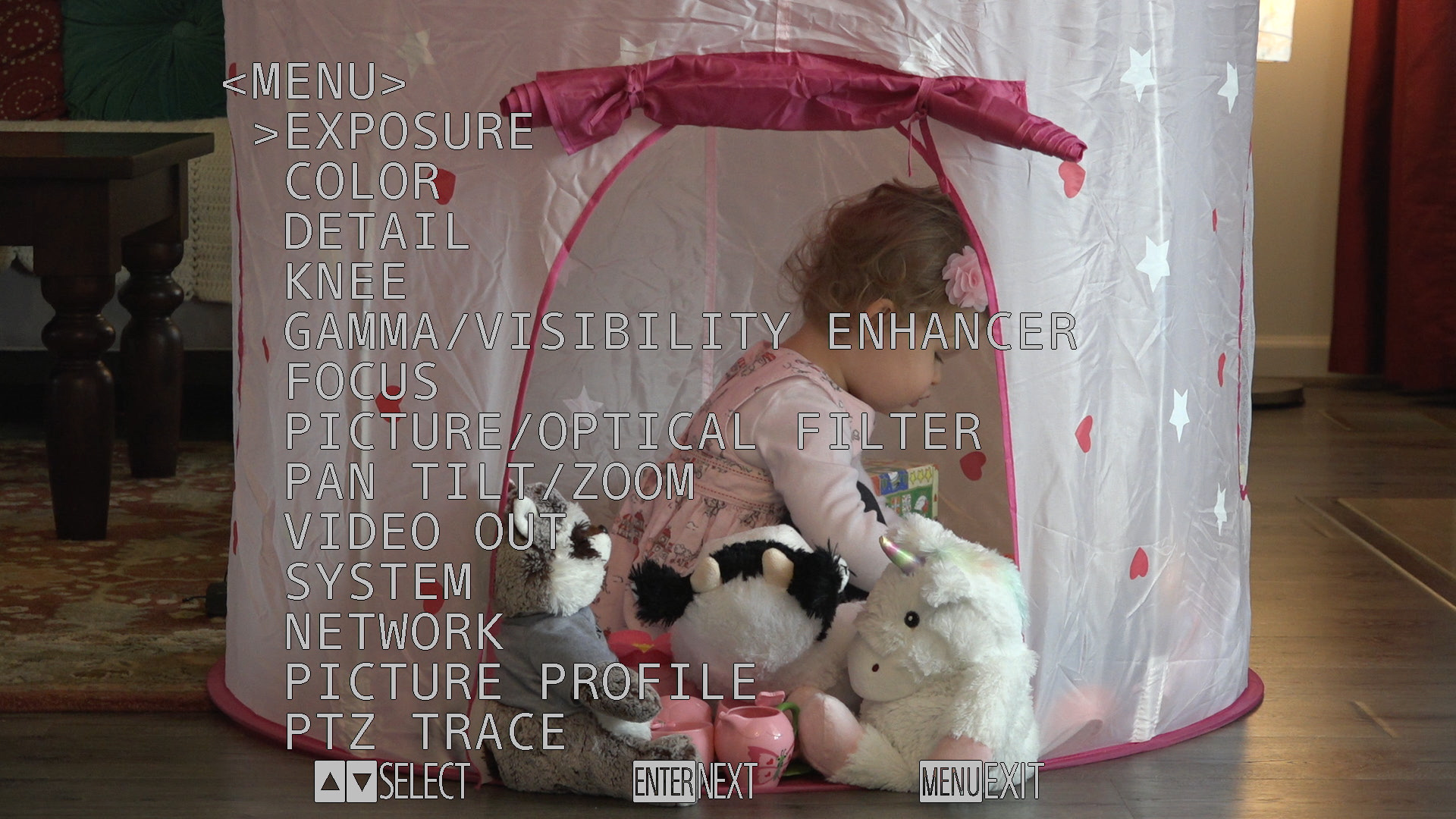 Joking aside these cameras are easy to use. The Pan/Tilt/Zoom, Iris, and Focus are easy to learn to operate manually or, in the case of Iris and Focus, easy to set to Auto. I felt like Sony has done a very good job with their Autofocus on both the BRC-X1000 and BRX-H900 cameras. Do not be afraid to let these cameras do the work for you if you want. I also loved how an operator could dial in the speed of the focus. One can rough in focus while using the Focus knob on a quicker setting and then slowing down the focus speed to something slower to ensure exactly what you want in focus is actually in focus. I found the Pan/Tilt/ Zoom to all be smooth and easy to operate from a control panel. These basic settings are easily mastered very quickly.

Now, of the two cameras Sony sent me, only the Sony BRC-X1000 is capable of outputting a 4K signal. The BRC-X1000 has a dual-link 3G-SDI interface which requires a recorder or monitor to accept dual-link 3G-SDI input for 4K recording or viewing. If researching this camera for your 4K PTZ set-up make sure all your production accessories work with the camera and its somewhat unique 4K output set up.

I think there are other benefits of the BRC-X1000 and the 4K sensor found within its housing. For example, the camera comes with Clear Image Zoom Technology increasing the optical zoom to 24x in HD and 18x in 4K while maintaining the exceptional image quality of the Zeiss Vario-Sonnar 12x zoom lens. 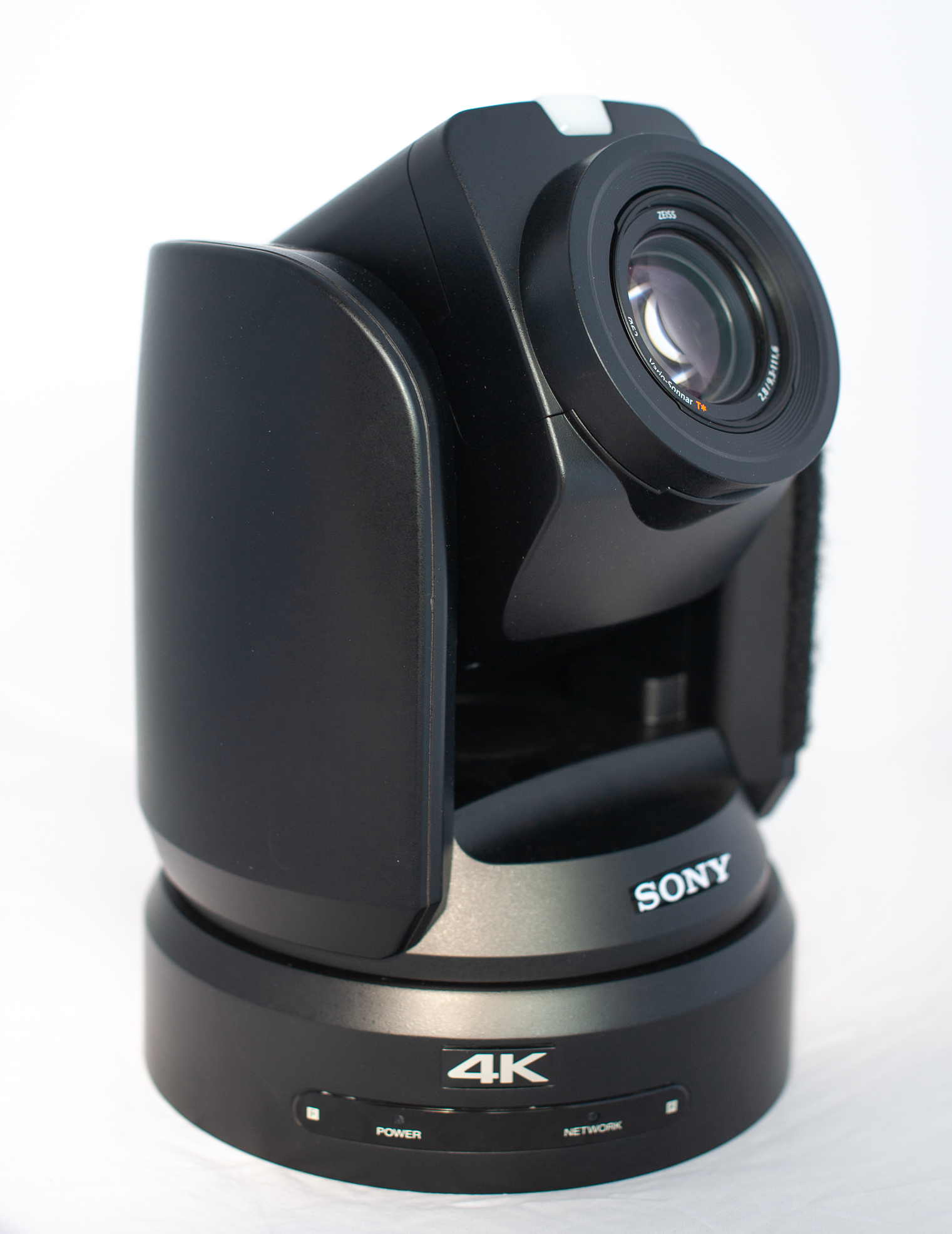 If you are looking for 720p or 1080i in either 59.98 or 50 Hz standards then the BRC-H900 might be a better fit for your production. I see this camera more likely to be used in broadcast situations where there is a lesser need for 4K acquisition. I’m thinking Church, Government, or even local news could make great use of the BRC-H900.

Both cameras, the Sony BRC-X1000, and the  BRC-H900 have something close to a low-light capability. Just don’t expect Sony A7s type of low-light capability. The Sony BRC-X1000 has the Exmor R CMOS back-illuminated image sensor with a low-light capability of 1.7-lux sensitivity making it suitable for low-light ambient scenes and the BRC-H900 has a lesser low-light capability of 4-lux and a lens aperture of f/1.9. I took the time to shoot with both cameras in my garage at night. As expected, I found the BRC-X1000 performed better. I warn shooters to avoid the highest gain setting on each camera or embrace the noise to capture what is needed. I will say I kind of doubt users will be using either of these cameras in low-light situations. This is just not where these cameras thrive. They thrive in a production environment. This typically means well light scenes no matter what it is. The BRC-X1000 gain tops out at +33 and the BRC-H900 tops out at +24. Both cameras have the standard -3 as a low gain function.

When shooting low-light and set to autofocus both cameras struggled a touch. This is not a surprise. I have found most cameras like a bit of contrast when they are set to autofocus. What I found was I too was having difficulty manually focusing both cameras because the image was so gray I couldn’t see exactly well. This is likely was a self-created problem. Will most PTZ operators find themselves trying to manually focus these cameras with the gain turned up and the light dim? I guess it is possible though I kind of doubt it.

Manually focusing both cameras in good, or even only okay, light was a breeze. I found I would use the faster speed setting for the focus knob to get my focus close to critical and then I would slow the focus knob setting down to make sure exactly what I wanted in focus was in fact focus. This was quick and easy. 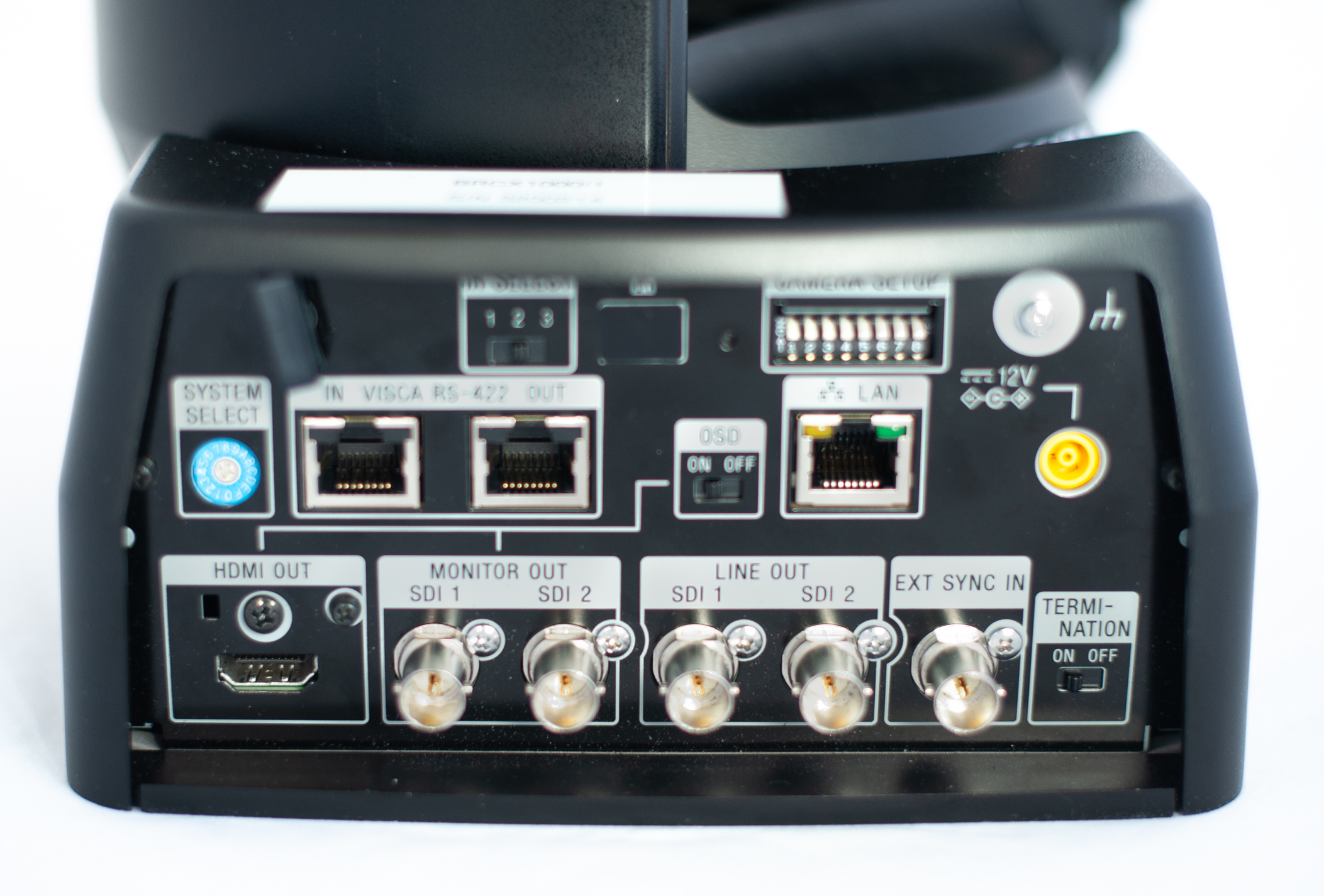 What’s great about Sony cameras, like most modern video cameras, an operator can dial in a gamma or color setting best to capture the type of scene they are shooting. The BRC-X1000 and it’s larger 1″ CMOS Sensor appeared to me to produce a more pleasing image to me. This makes sense to me since it is the more expensive, only slightly, of the two. The BRC-H900 and it’s 1/2″ sensor has other benefits for users like it’s SteadyShot image stabilizer.

Now, I do not have a ton of experience with PTZ cameras and I still found these to be easy to set up and start shooting pretty much right away. Do not be afraid of using a PTZ camera for your next project. Both the BRC-X1000 and the BRC-H900 have their place in the PTZ world.  Both are world cameras capable of 59.98 and 50 Hz standards. Again, look to “Free Solo,” the Oscar-nominated documentary, as an example. If the filmmakers had not used remote cameras in certain spots they might have endangered the camera operator as well as climber Alex Honnold.