Robert Ham is passionate about filmmaking; he takes a video camera and tripod whenever he travels and capturing people’s stories. From 2007 to 2013, he served as an Army Combat Correspondent stationed in Afghanistan and the Pacific, where he focused on interviewing soldiers and documenting subjects ranging from close combat to the trials of PTSD.

As a soldier and filmmaker, Ham is part of a cohort that dates back to the early days of Hollywood and includes such greats as William Wellman, a World War I fighter pilot who directed the 1927 Oscar winner Wings; John Ford, John Huston, William Wyler, and George Stevens, who were embedded with U.S. forces and documented the fighting of World War II; and Oliver Stone, a Vietnam combat veteran who studied film under the GI Bill.

Filming in more than 40 countries, Ham used Adobe software to document soldiers’ lives with honesty and artistry. He received four regional EMMY nominations for his work, two of which won awards in their categories. He also won the Department of Defense’s Military Videographer of the Year award in 2009, 2012, and 2013. Ham rose to the rank of Staff Sergeant and completed six years of service in December 2013. He is now a graduate student in the prestigious Master’s Degree program at USC School of Cinematic Arts. 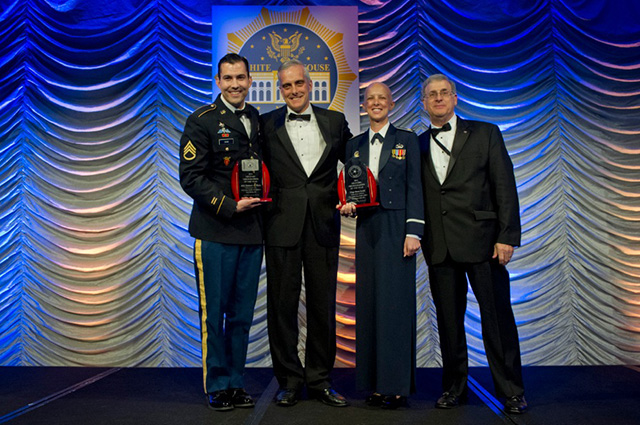 Adobe: Where does your love of filmmaking come from?
Ham: I grew up just outside of Los Angeles, so film was never far away. I started shooting my own videos when I was a teenager and convinced my parents to let me take some local filmmaking classes. Once I started working with Premiere Pro and After Effects, I fell in love with storytelling and filmmaking. Throughout high school, I shot videos and edited them at home using Adobe software, just for fun.

I got my bachelor’s degree in film production, but one of the biggest lessons came when I did a semester abroad in Israel. I got my first taste of backpack journalism—just me and my camera, talking to people from all walks of life. It opened up a whole new world for me and helped me discover my passion as a storyteller—listening to peoples’ stories and finding a way to share them with others. 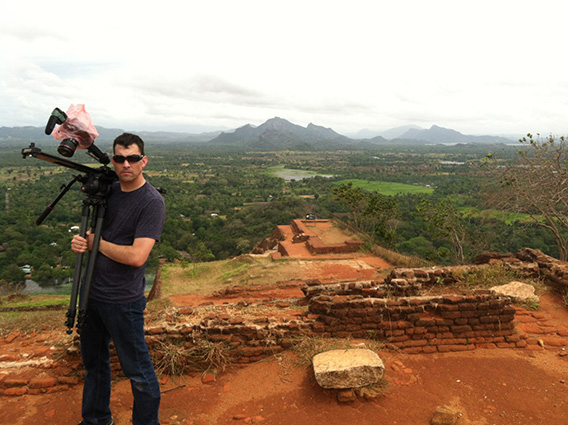 Robert Ham with his pocket dolly and camera on the top of a mountain in Sri Lanka.

Adobe: Why would a filmmaker join the armed forces?
Ham: I worked as a freelance editor and production assistant in Los Angeles, trying everything I could to break into film. After I got married, I wanted more consistent work. A member of my family was in the Army, so I decided to try something completely different. I discovered that the Army had positions for dedicated videographers. In addition to a steady paycheck, I’d get to do what I wanted to do. It was like a dream come true!

After basic training, I went to the Defense Information School (DINFOS) to study visual communications. At DINFOS, they had just standardized on Adobe Premiere Pro, so I got very familiar with it as an efficient and easy-to-use tool. I ended up in the 4th Brigade Combat Team (Airborne), 25th Infantry Division and deployed with them to Afghanistan, filming several documentaries there. After that, I toured around Asia and the Pacific doing stories about military exercises or documenting our military humanitarian efforts, such as working to protect women and children, aid displaced people, or assist people after weather-related disasters. 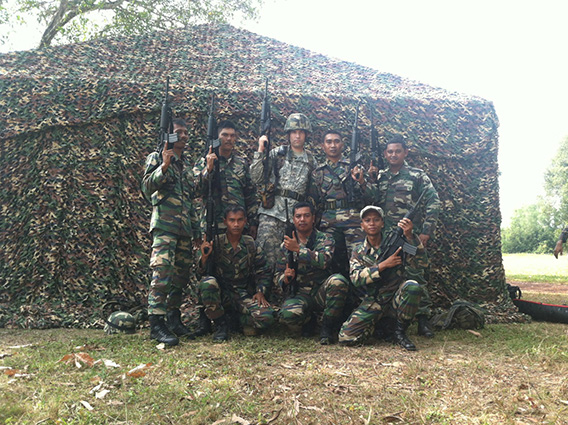 Robert Ham posing with Malaysian Soldiers after the culmination of exercise in Malaysia.

Adobe: Were you using Adobe solutions throughout your time in the Army?
Ham: I have experience on all the platforms—Premiere Pro, Avid, and Final Cut—but it was great for me that DINFOS was teaching Premiere Pro, because that was my preference. Adobe Premiere Pro just lets me do so much more with so much less effort. I love playing with the Lumetri Looks to bring my footage to light in different ways.

Adobe: What are some of most important Adobe features for you?
Ham: I’m not really a technical guy; I prefer to focus on my story and tell it in the way that it deserves to be told. I’m always looking for ways to do things more efficiently. I love how the Adobe tools talk to each other, so if I make changes to assets in Photoshop or After Effects the changes are automatically applied to the Premiere Pro timeline. It really saves me a lot of time because I’m not constantly exporting elements.

The native video editing in Premiere Pro is even better. When I was in Afghanistan, I would work with all sorts of video, from raw RED footage to video from a soldier’s helmet camera. At that time, I had to take the time to transcode all of the footage, but now I can just place all of the footage on the same Premiere Pro timeline and start editing right away. It might not sound like a huge deal for some people, but when you’re trying to work with a wide range of footage, cutting down on render times is a huge benefit. 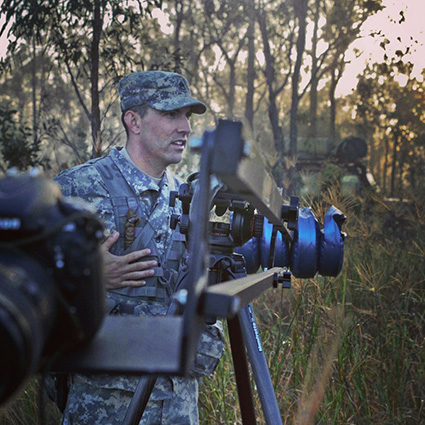 Robert Ham with his jib and camera in the bush of Australia during an exercise in 2013.

Adobe: How are you using After Effects CC?
Ham: I create a variety of 2D graphics in After Effects. Whenever I don’t think I can do something, I watch a tutorial and realize I can do it—and do it easier than on another platform. One of the last films I did in the Army was De-Mining in Sri Lanka; the first minute is a history of the Sri Lankan Civil War, created with After Effects.

Adobe: Where do you find the inspirations for your stories?
Ham: There are so many interesting people in the Army, who have done remarkable things. Most of them are just regular people, but they’ve been thrust into environments and situations that have made them extraordinary. That’s not how they see themselves, though; they see themselves as average people who go and do their job. We live in an age of social media and self-promotion, and these guys don’t do that. In fact, they don’t like to talk about what they do. I was in a somewhat unique situation, because I was one of them; I wore a uniform and deployed with them. So I was able to get them to open up on camera.

Adobe: Tell us about your regional EMMY Award nominations.
Ham: My first EMMY nomination was in 2009 for a documentary I did in Afghanistan, which was followed by a second nomination in 2010. My third and fourth nominations came this year and recently won in their categories. One was a film that I’m really proud of: Level Black: PTSD and the War at Home. I followed a soldier, Staff Sergeant Billy Caviness, who was severely wounded when he was hit by a mortar in Afghanistan. After the attack, he struggled with severe PTSD on top of his physical wounds. Level Black chronicled his recovery for a year. I loved telling that story, because it’s one that not many people would have heard otherwise. 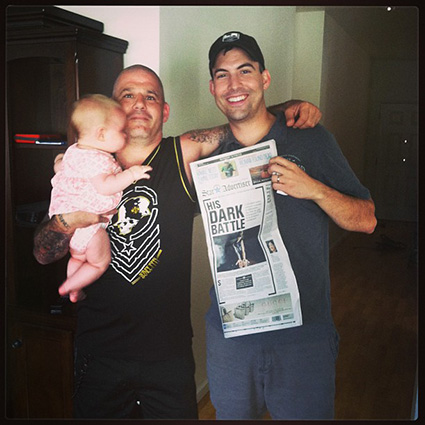 The other win was for Missing in Action: The LTC Faith Story, which is a film about the journey to find and identify the remains of a hero from the Korean War. That was an interesting project technically, because I mixed in archival footage to create a sense of history and explain the story better. I used After Effects to create a visual timeline with the archive footage, which gives viewers a clearer picture of the order of events and the passage of time. 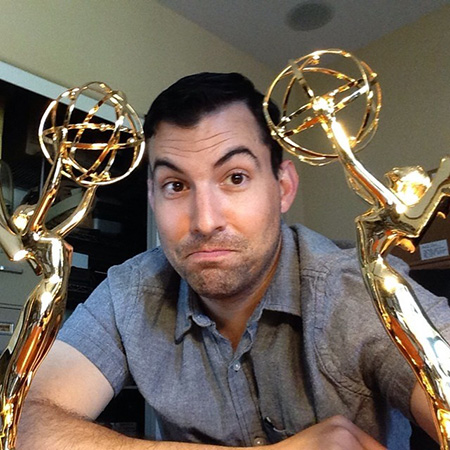 Adobe: What are your plans now that you’re a civilian again?

Ham: I just started on my master’s degree at the USC School of Cinematic Arts. I’ll always love documentaries and backpack journalism, but I’m starting to work on more narrative films and I’ve even worked on a few comedies. My experiences in the military introduced me to so many people and I want to keep telling their stories in a more mainstream environment. I’m hoping that working with different approaches can help me reach more people.

Adobe: What do you like most about Adobe Creative Cloud?
Ham: I’ve always loved the integration between the Adobe tools, so the idea that integration has gotten deeper and simpler in Creative Cloud is incredible news. I’m really excited about the idea of getting to experiment with all sorts of Adobe apps without needing to buy each one separately. I’ve worked with Photoshop, but I’d love to try out Illustrator as well. I also plan to get a lot of use out of SpeedGrade. And since I’m getting into narrative storytelling, I can’t wait to dive into Story CC Plus. It should make it a lot easier to collaborate with writers and organize productions.