some notes on Mini DisplayPort and its possible uses 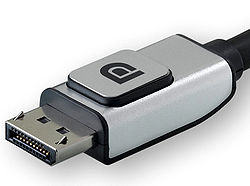 I didn’t pay a whole lot of attention when Apple introduced the new Macbook Pros with a Mini DisplayPort connector. Now that they are also in use ALL the new Macs introduced the other week (Mac Pro towers, iMacs, and Mac Minis), I figured it was time to do a little digging and find out what it is all about. Read on after the jump.

I was curious about Mini DisplayPort – why bother? We already had a mini DVI plug on laptops (hellooo, adaptor city!) that I’ve been dealing with for a few years with my MacBook. So why go to yet another connector? My first guess/hope was that it might be more HDTV friendly – but nope, unlike DVI, which has some signal compatibility, DisplayPort (and Mini DisplayPort) are DIFFERENT, even though they can carry that signal. Here’s just some stuff I found digging around the web:

From a Wikipedia page on DisplayPort: : “a new license-free, royalty-free, digital audio/video interconnect, intended to be used primarily between a computer and its display monitor, or a computer and a home-theater system.”

-NOT compatible with DVI or HDMI

-the clock is embedded in the signal, unlike DVI or HDMI which require separate clocks

-unlike DVI and HDMI, DisplayPort handles both external and internal display connections (laptops vs desktops?)

-competitor to HDMI…which is of course the current standard

-OK, and we’re using the MINI DisplayPort connector – so a variant on a competitor to the standard…great.

Stated advantages over DVI:
-micro-packet protocol (as a user, do we care?)
-multiple video streams over a single connection in future versions (does us no good now)
-can support chip to chip communications (handy for smaller stuff later – when do I get my micro DisplayPort enabled iPhone that’ll play back 1080p video?)
-supports RGB and YCbCr (this is good – but can we drive an HDMI display from this sucker and get accurate color in YCbCr NOW with these Macs?)
-latching connector with no screws

Dell has some monitors with DisplayPort and HDMI inputs

The standard will support 1920×1200 at 10 bits/channel, which would be a GREAT step forward for professional applications. Oh, it’ll also support 260×1600 and 3840×160 at 60 Hz (fps) at 30 bits/channel as well. Right on! OK, can we use that now? Can we plug in an HP Dreamcolor and get 10 bit precision out of FCP, Color, or Photoshop? As best I understand it, no – we’d need the OS to support it, and AFAIK, Leopard doesn’t, maybe Snow Leopard will. Oops, after 20 minutes googling and looking, I see no mention of anything along these lines, although I am certainly curious what QuickTime X will be about. Hopefully more useful and entertaining than Jason X.

Overall, I think it lays some nice groundwork that….we can take NO advantage of at this time, requiring adaptors that are $30 or $100 for Apple’s own current monitors, and with no OS support to differentiate the advantages. Poop.

Oh, wait the new 24″ LED LCDs run on Mini DisplayPort – so can plug directly in.

OH, then found this page right on the money – Mini DisplayPort – Wikipedia, the free encyclopedia

MiniDisplayPort DOES support dual link so you CAN drive a 30″ off of this – expected from the tower Macs, nice to know in the smaller displays as well.

What is Mini DisplayPort? Read here.

Other interesting things about MiniDisplayPort:

…so to me, it boils down to this – it is one simple plug (hey, anybody remember ADC?) to carry picture and audio, even for multiple monitors. It has the POTENTIAL, down the road, to do nifty things like 3D and 10 bits/channel, but none of that is on the horizon for the next year as far as I can tell. Maybe this is just Apple laying groundwork for future hardware/software developments, maybe this is just a cheaper, smaller connection right now, maybe it is both. But for the moment, it doesn’t offer any compelling advantages that I’ve seen that we can use TODAY with the applications that are shipping now. The biggest downside is the cable confusion it’ll cause – I don’t know ANYBODY that has any of these cables sitting around, whereas I have BUCKETS of DVI and VGA cables. Ah well, maybe this is the same griping that came of “But I have tons of ADB cables already!” when Apple went all USB.

Apple is eager to push it, and will give away the deets to anybody who asks – a sure sign they want to push it out there, as they recognize this is NOT an industry standard we’re all clamoring for. DVI works pretty darned well with what we have today – not to say I’d LOVE to have, in a year or two, the opportunity to run a truly 10 bit display, properly calibrated, at full speed off of a proper GPU.

Reader Richard was kind enough to point out in an email:

I realise your post pertains to the Mac, but I’m not sure if the OS is required to be 10bit – to my mind only the display driver (and obviously the application) should need to be.

I say this, as the new Nvidia Quadro CX can apparently display Adobe CS4 apps via it’s Displayport in 10 bit (and 10bit SDI with the addon board), right now in Windows XP.

……while one of my Austin friends Wiley pointed out in the comments:

Mini Display has been a nightmare for me so far. No adapter to HDMI or component yet. In fact to get to plain old analog SD, you need a crappy plastic pacific-rim pirate technology adapter box.

I think Apple did the right thing by putting it in laptops first – they tend to not be as mission critical for cabling. But what if you are a professional user and want to drive two monitors and need cable extensions? Or need to connect to HDMI? Or component? (Not that I think it carries that signal in the wiring, but you know what I mean).

Other good stuff in the comments, read on if you are interested.