Apparently a name only means so much. As of this week, SmallHD’s product line is no longer just small. The company that owes its life to Doritos and the Superbowl has moved on to bigger and better things–literally–adding 17”, 24” and 32” monitors to its formerly Lilliputian line-up of broadcast field monitors.

With displays previously maxing out at 7”, this new range is certainly a departure from their existing product line. But perhaps more important than the size is the dynamic range. The new monitors boast up to 1500 NITs in brightness with a 10 bit input for HDR viewing.

What does the HDR mean to you? It means that on set you’ll be able to see highlight and shadow detail that would otherwise be clipped out by a traditional monitor. Given the dramatic increase of dynamic range in the latest generation of digital cinema cameras, having a monitor capable of displaying a broader range of intensities is vital. And the 10 bit input means that your signal won’t get truncated on its way to the monitor.

If you’re a fan of the tight form factor of existing SmallHD offerings, you may be wondering how you’ll wrap your rig around a 17” or even 32” monitor. The good news is that thanks to modern, lightweight LCD technology, these monitors will mount comfortably to a C-stand. The rapidrail system on the back enables all kinds of mounting, both of the monitor to supports and accessories like wireless modules to the monitor.

Part of the monitor’s strength is the 10 bit color processing software and scopes. A USB color probe analyzes ambient light temperature and self generates a 3D LUT to keep color viewing as consistent as possible from location to location. 3D LUT looks can be saved and compared side-by-side, helping to establish the on-set grade. Those LUTs can then be saved along with corresponding still screenshots to provide a solid reference for the colorist in post. (Who will probably throw the whole thing in the trash and start the grade from scratch. Hey, at least you tried…)

And it’ll be shipping and in your hands by…OK we have no details on shipping yet. In fact pricing and availability won’t even be announced until Q2. But hey, that’s just an NAB away, so plenty of time to start saving. 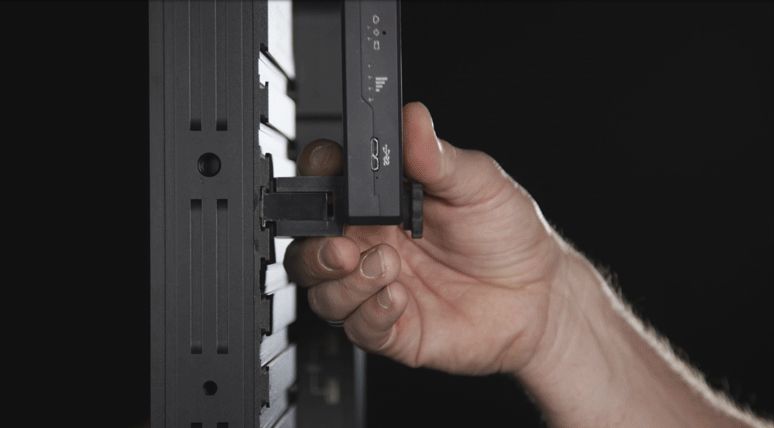 The slimline 5-inch diagonal screen takes HD monitoring to a whole new level. According to SmallHD co-founder Wes Phillips, “The image on the 502 is simply stunning. With a display that is sharper than the newest iPhone, shooters will be able to truly experience the full detail their cameras are capturing without breaking the bank.”

With a densely packed 441 pixel-per-inch screen, the cinematographer can depend on the 502 for critical focusing. It also features a 179-degree field of view for group viewing, and a wide color gamut that rivals OLED display technology.

The 502 supports 3G-SDI and HDMI input, output, and cross conversion. The monitor is format and frame rate agnostic, automatically adapting to a wide range of video signals. It provides the remarkable toolsets SmallHD users have come to expect, including the display of industry-standard and custom framing guides, focus assist, false color and zebra exposure indicators, and 3D LUT (lookup table) import. The monitor’s full-size SD card slot that facilitates 3D LUT import, also allows export of screen captures for continuity and other purposes.

An all-new operating system developed for the 502 and future SmallHD monitors greatly simplifies menu navigation. With a flick of the thumb the monitor will instantly zoom in or out of the source image, switch between tool presets, and zoom out to view 3 presets at once. The menus are designed to be conveniently customized to allow instant switching between frequently used features.

The 502 is rugged, housed in an aluminum frame with rubberized chassis, and is extremely portable, weighing in at only 9-oz (.25 kg) and measuring just 2.95” x 5.78” x 0.80” (75mm x 146.8mm x 20mm). The 502 monitor can be carried in the pocket, even with a pair of rechargeable LP-E6 batteries installed. The monitor can also be powered by an AC/DC adapter as well as from the D-tap on a camcorder or camera battery pack using the LP-E6 battery interface. Power draw from the monitor is paltry, allowing all-day operation off of two LP-E6 batteries under normal use.

Choose what you need If you have any difficulties with writing the paper, you should not spend your time...